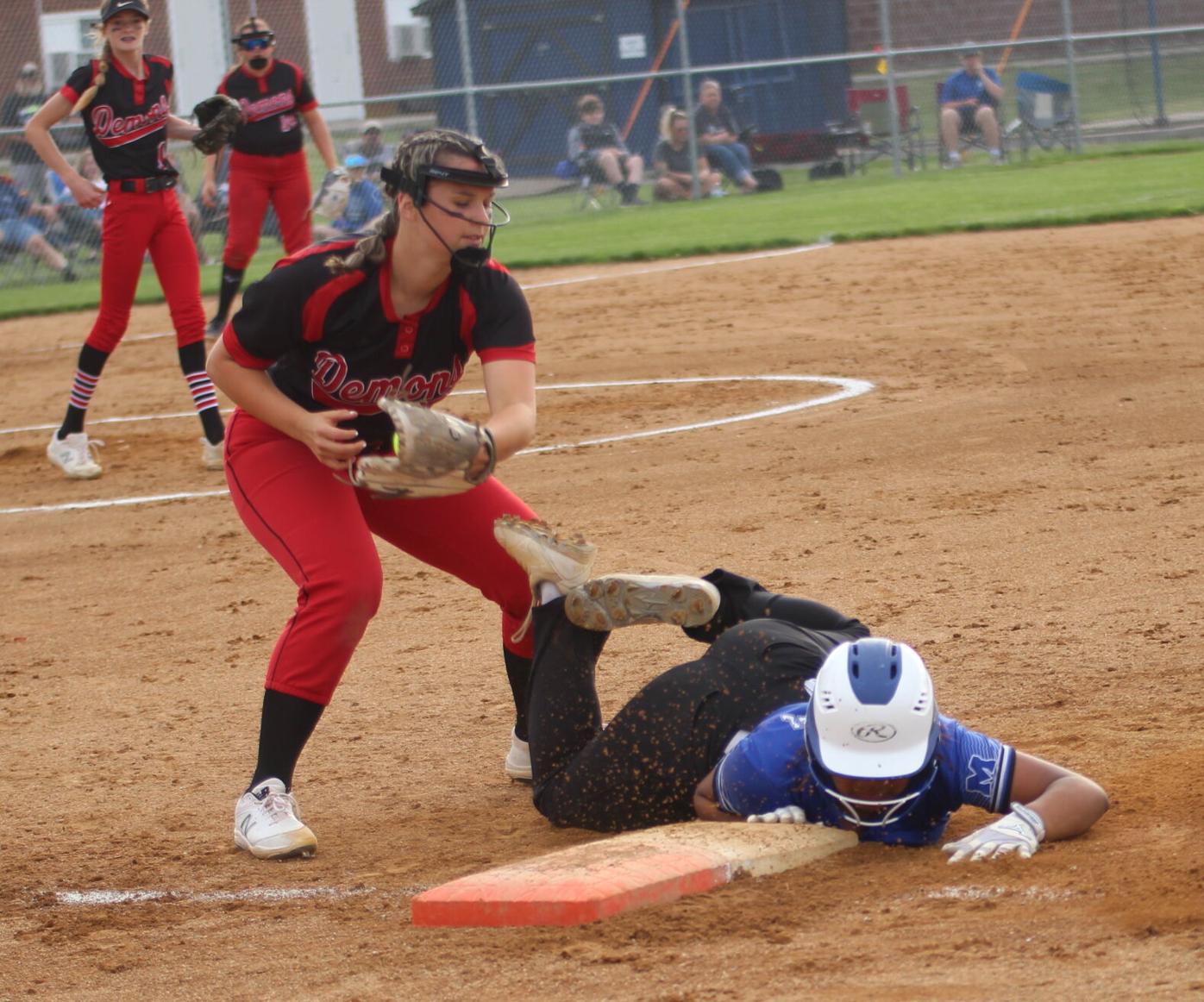 Destiny Nathaniel dives back into first base, avoiding a tag from Lamoni first baseman Cameron Martin during action for the Moravia High School softball team on Thursday. 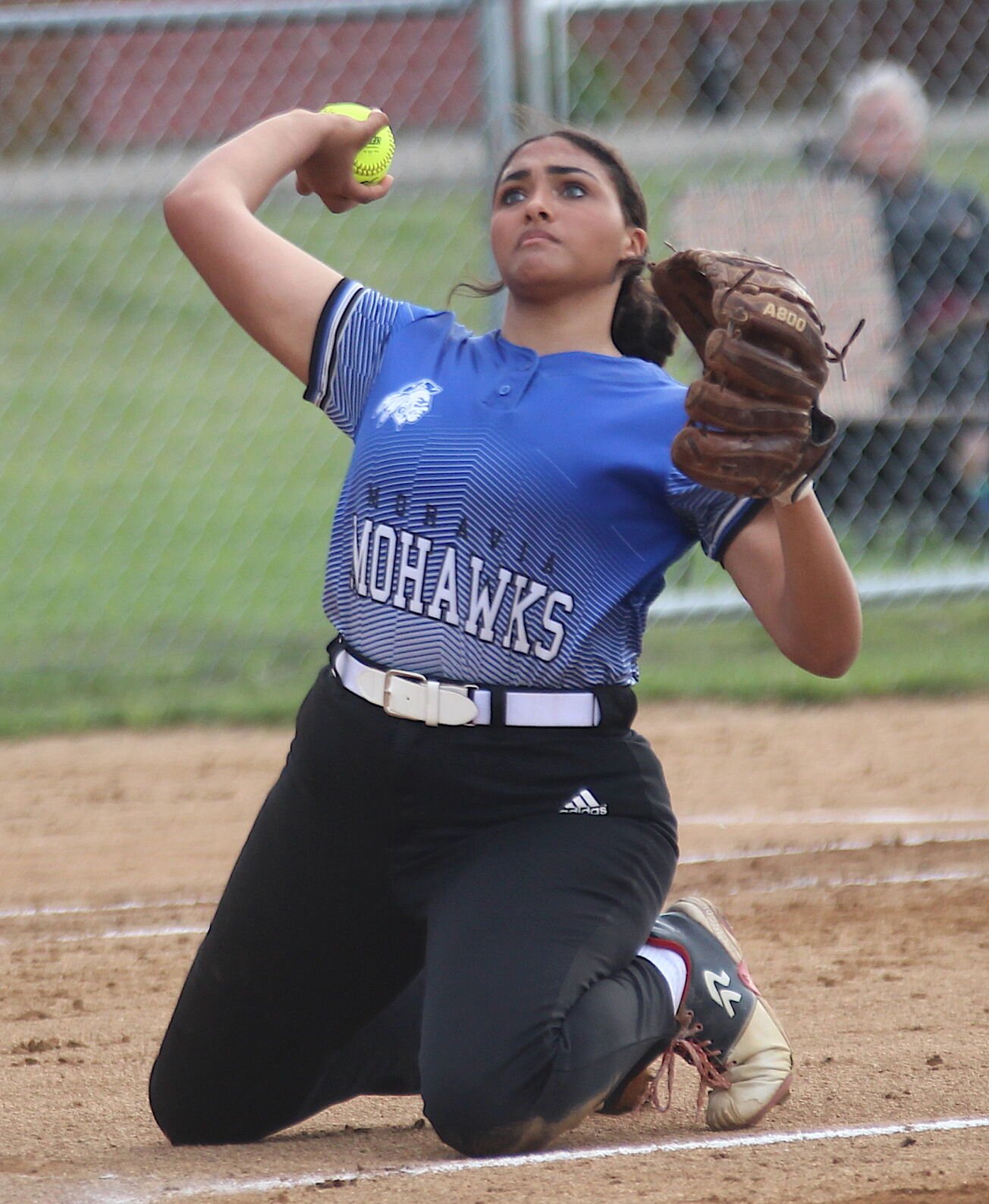 Moravia senior pitcher Anaya Keith makes a throw from her knees to record an out at first base during Bluegrass Conference softball action on Thursday against Lamoni. 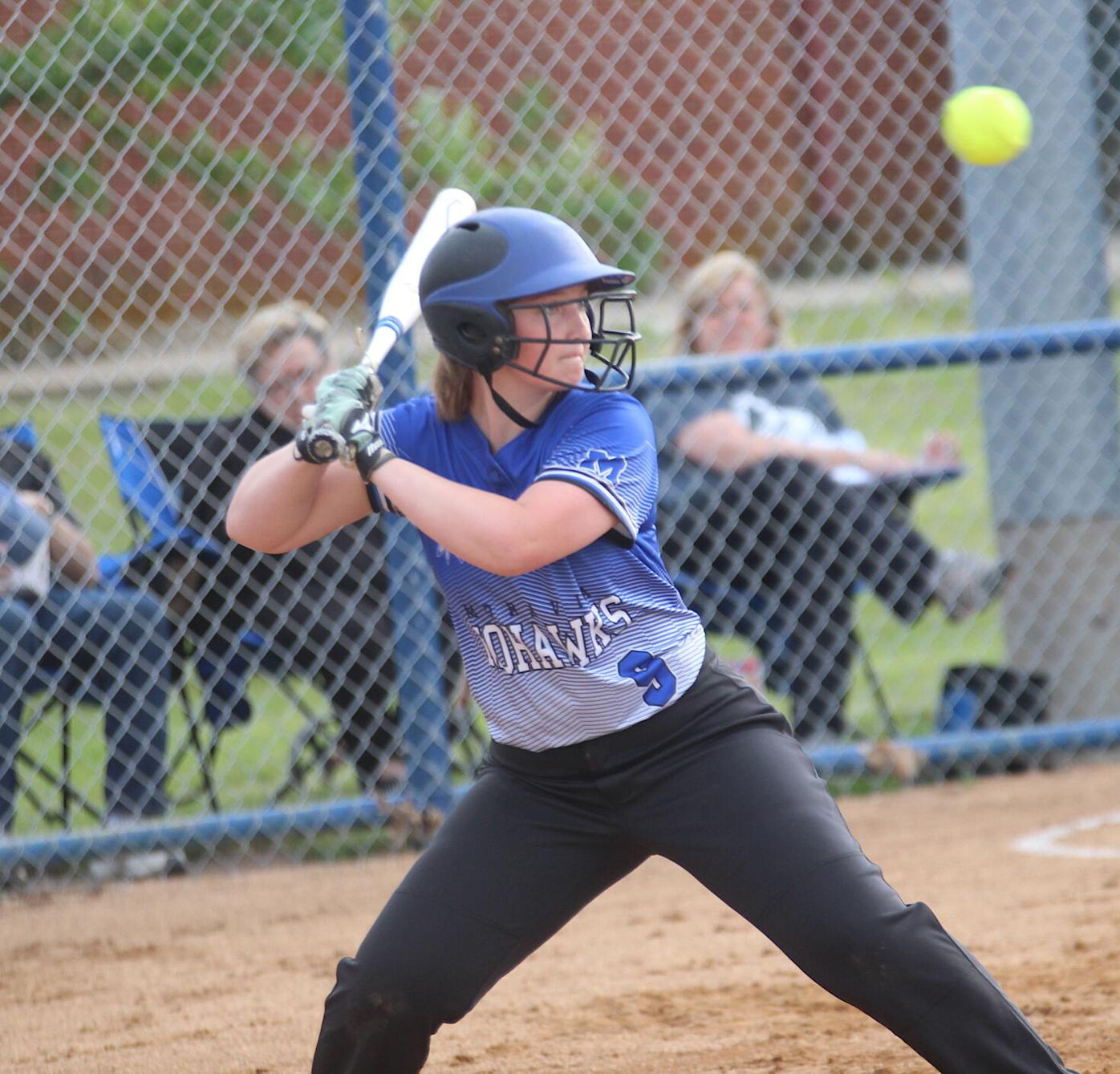 Isabel Hanes watches a high pitch head to the plate during Bluegrass Conference softball action for the Moravia Mohawks on Thursday against Lamoni at Lady Mohawk Field in Moravia.

Destiny Nathaniel dives back into first base, avoiding a tag from Lamoni first baseman Cameron Martin during action for the Moravia High School softball team on Thursday.

Moravia senior pitcher Anaya Keith makes a throw from her knees to record an out at first base during Bluegrass Conference softball action on Thursday against Lamoni.

Isabel Hanes watches a high pitch head to the plate during Bluegrass Conference softball action for the Moravia Mohawks on Thursday against Lamoni at Lady Mohawk Field in Moravia.

Like the Chicago Cubs shortstop, Nathaniel found herself in a bit of a pickle in the home opener for the Moravia High School softball team caught in a rundown that drew the attention of the entire Lamoni infield.

"It felt like I had half the team chasing after me," Nathaniel joked.

Hours after a bizarre play in Pittsburgh that allowed Baez to bring home a run and eventually reach second base on what should have been a conventional groundout, Nathaniel had to scramble in Moravia to avoid being tagged out on a squeeze bunt attempt by Callie Benjamin. Unlike Baez, Nathaniel found herself dancing up and down the third base line several times trying to stay alive

Eventually, Nathaniel drew a throw that went over everyone's head, allowing not one but two runs to score for the Mohawks. The play helped ignite an eight-run rally in the decisive inning of a 13-5 Bluegrass Conference win for Moravia.

"It was a very hard situation to get out of, but it helped having our dugout right there and my teammates cheering me on," Nathaniel said. "I just kept going back and forth. I didn't really have a strategy. I just kept going."

Moravia would score three of their eight runs during the decisive third inning on bunts. Layla Ewing followed Nathaniel home on the wild throw down the left field line before Kjiresten Albertson came home on a squeeze bunt by Lauren Long, which turned into a throwing error on the Demons that extended the rally.

"We talk at practices about how we need to move runners over," Moravia head softball coach Kevin Fritz said. "We need to people on base and move them along with the small-ball or the big base hits."

Nathaniel had a pair of base hits, including an RBI double in the fifth inning that put Moravia (2-0, 2-0 Bluegrass) on the verge of a second straight 10-run victory to open the season. The junior third baseman was aggressive throughout the night on the bases, narrowly getting back to first base earlier in the third inning after leading off with a single after venturing over halfway to second base, drawing a throw from Lamoni catcher Kelly Lloyd.

Nathaniel nearly clinched a 10-run win for the Mohawks, making a dash for home plate from second base on a groundout to short by Anaya Keith. This time, the Demons (0-2, 0-2 Bluegrass) were able to throw Nathaniel out to extend the game.

"Destiny is a go-getter. She takes risk on the bases," Fritz said. "I always tell the girls I like to be aggressive on the bases. Destiny is definitely aggressive. Sometimes too aggressive, but she was able to get out of a couple of jams including one that got us a couple of runs."

Anaya Keith helped her own cause in the pitching circle during the third inning, collecting a pair of hits while driving in the two runs on her second single to put Moravia up 12-1. Keith picked up her second win of the season, continuing to work her way back to full strength pitching into the fifth before handing the ball over to Alexa Bedford.

"I did a lot better hitting my spots than I did in our first game (a 13-0 win in five at Diagonal)," Keith said. "I've been dealing with an arm injury. It kind of got tough towards the end. They definitely started hitting me after seeing me for five innings."

Benjamin delivered the first big blow for Moravia, delivering a two-run single with two outs in the first as the Mohawks used two walks and two hit batters to help open a quick 4-0 lead. After traveling to Melcher-Dallas on Friday, Moravia heads down Highway 5 to the softball diamonds on the Indian Hills Community College campus next to Pat Daugherty Field to play in the Centerville Tournament on Saturday, including an opening showdown with the Redettes at 10 a.m.

"When we played (Centerville) last year, that really was one of the best games I personally have pitched," Keith said. "It was more like a pitcher's ballgame for me. I felt like I was able to strike out some girls and it was one my favorite things I've ever done. If we can play like that again on Saturday and play like a team, we can set a high bar for the rest of the season."