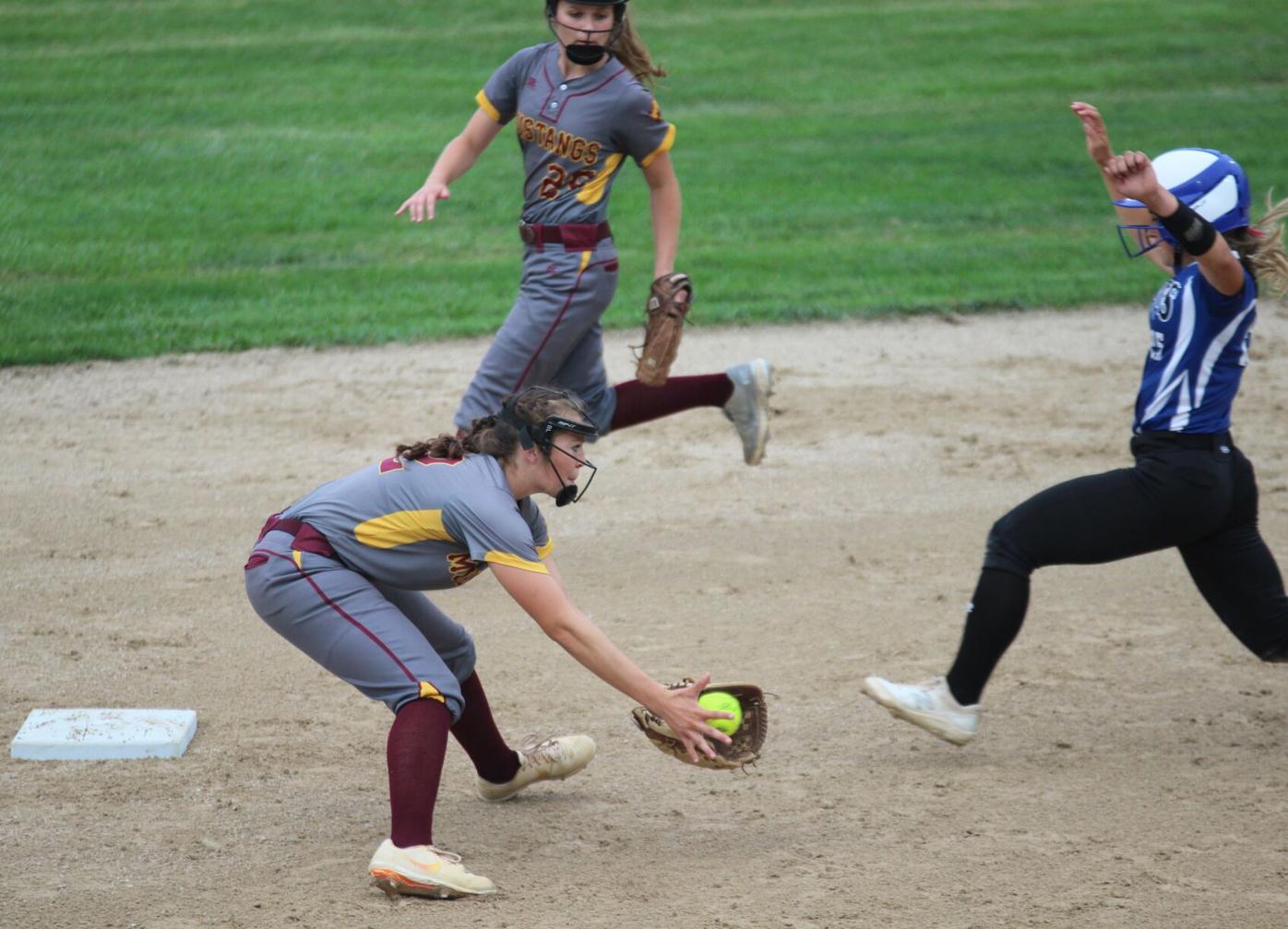 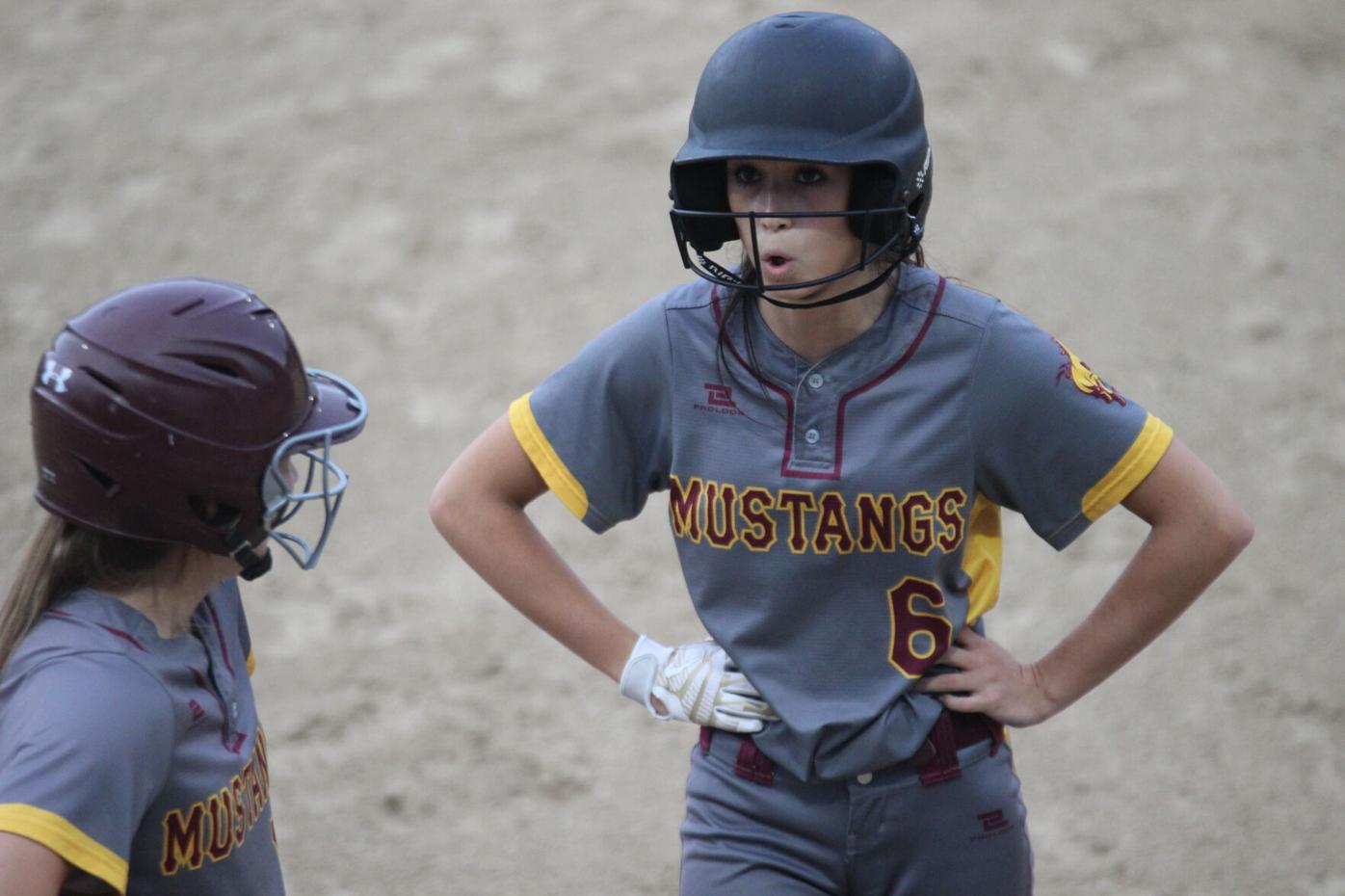 WEST LIBERTY — Two years ago, the West Liberty Comets made their way to the state softball tournament.

Monday night, two programs that have traveled vastly different paths in recent years found themselves dead even on the road to Fort Dodge. The 14th-ranked Mustangs and eighth-ranked Comets battled into the final inning with the score tied at 3-3 in the Class 3A, Region 8 finals.

Ultimately, eighth-grader Pearson Hall gave the eighth-ranked Comets the edge at the finish line, driving a one-out pitch into the left-center field gap to score Rylee Goodale from second base. Hall's RBI double set off a wild celebration as West Liberty edged Davis County, 4-3, advancing to state for the second time in three years.

"I've had lots of good hits, but that one is definitely the most exciting and the biggest," Hall said. "Once Ady (Bell) got Rylee to second base with a bunt, all I needed to do was get a base hit. I figured, even if it doesn't score Rylee, my sisters right behind me can make the contact to get them in."

Hall is the third member of her family to join the current West Liberty varsity softball squad, joining older sisters Sailor and Finley. The older sisters lit up the scoreboard in the bottom of the sixth with back-to-back one-out hits that snapped a 1-1 tie, putting the Comets up by two runs needing three outs to win the regional title.

"To hit 1-2-3 at the top of the order with my sisters is amazing," said Pearson Hall, the third youngest of four Hall sisters. "I know that, if I can get on, there are hitters behind me who have my back. I never have a doubt they'll get me in or, if I get out, they'll have my back when they step up to the plate."

Monday night's regional final breezed by as Sailor Hall and Davis County sophomore pitcher Madeline Barker matched scoreless inning for scoreless inning. The first five innings wrapped up in less than an hour with West Liberty finally inching in front in the bottom of the fifth on a fielding error with two outs.

"We had opportunities earlier in the game that we didn't quite execute on, which made a bigger difference as the game went on," Davis County head softball coach Zach Dunlavy said. "West Liberty is a heck of a team. They played well."

The Mustangs fought back in the top of the sixth, matching West Liberty's run. Rachel McFarland, Laynee Moore and Briley Lough all came up with two-out hits with McFarland coming home on a ball that got past Comet first baseman Isabel Morrison on Lough's infeld single, tying the game at 1-1.

"We just wanted it so bad. Going into those late innings, we knew had to get the energy to pick ourselves back up," Lough said. "There are just so many people in our dugout that can get so loud. Everyone had energy. As long as everyone's talking, it's not hard at all to get back up."

It became a little harder in the seventh, however, after the eldest Hall sisters scored as part of a three-hit rally in the bottom of the sixth that put West Liberty back in front 3-1. Jalee Lough, however, worked a walk off Sailor Hall to open the top of the seventh and reached second on a ground ball hit by Caden VanLaningham that resulted in West Liberty's fifth error.

Sophia Young followed with an RBI double over the head of Comet right fielder Brooklyn Buysee, pulling Davis County with 3-2 while putting two runners in scoring position with one out. Macy Hill's deep flyout to center allowed VanLaningham to score from third, extending the game and the state championship hopes for the Mustangs.

"We talked in the dugout that great teams find a way to respond," Dunlavy said. "We're a great team and the girls responded."

Goodale snuck a two-strike hit into shallow right before moving to second on Bell's bunt, setting the stage for Pearson Hall's walk-off double. While eighth-ranked West Liberty (23-7) will be moving on to play next week in the Class 3A portion of the Iowa High School State Softball Tournament in Fort Dodge, 14th-ranked Davis County (21-8) may have taken the biggest strides throughout this season beating four teams ranked in the top 10 of Class 3A over the past two weeks and return every starters going into the 2021 season, one in which Davis County is likely to start out as a top-10 team themselves.

"I thought we got everyone's best shot this year and came through it," Dunlavy said. "I think Davis County softball is here and, hopefully, here to stay as a program."