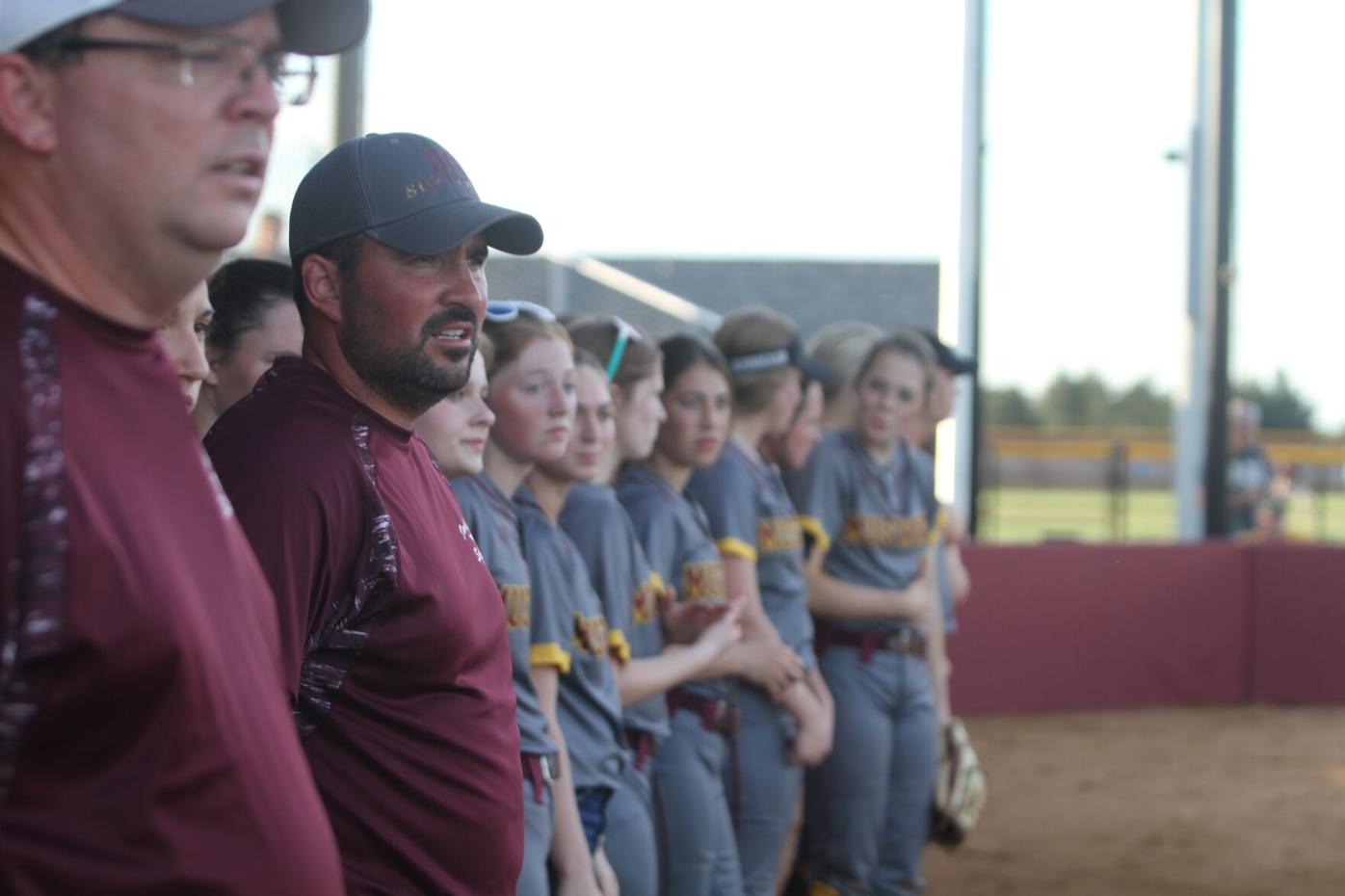 Davis County softball head coach Zach Dunlavy stands with his team before the Mustangs' 2020-21 home opener against the Knoxville Panthers on May 27. 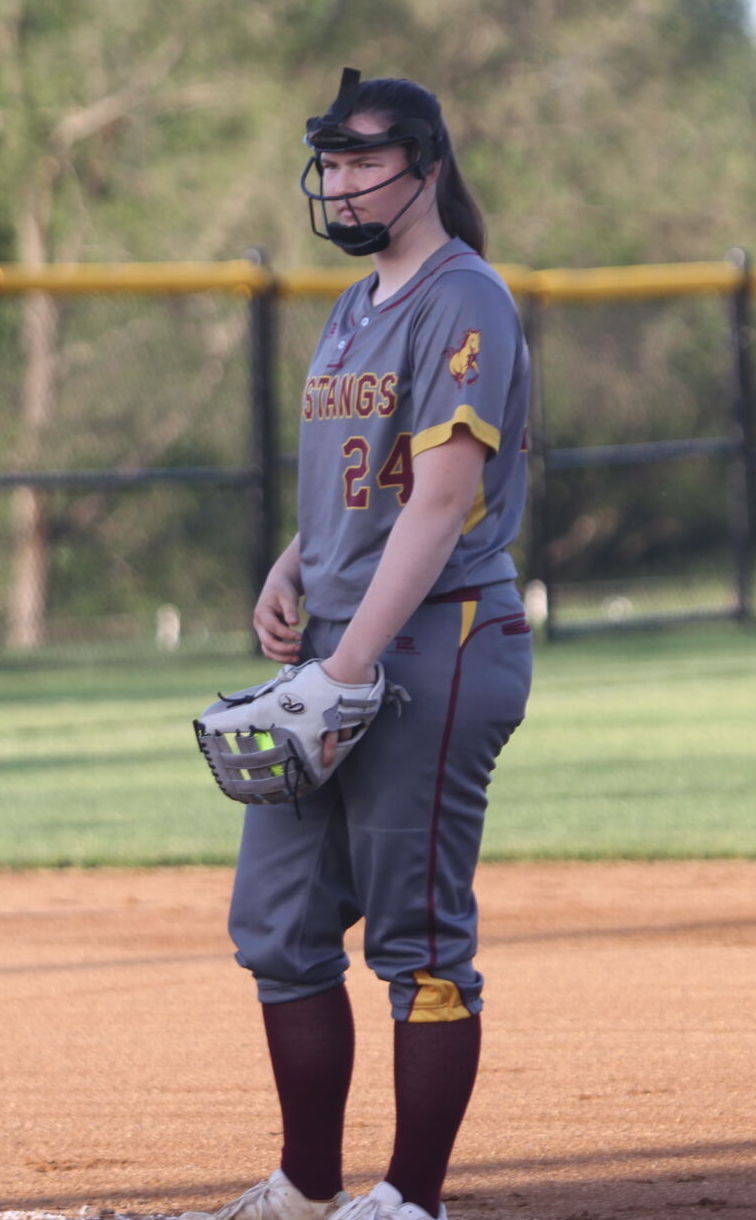 Madeline Barker gets set to pitch against the Knoxville Panthers on May 27 at the West Field Complex. Barker struck out 11 batters in the Mustangs' 7-3 win. 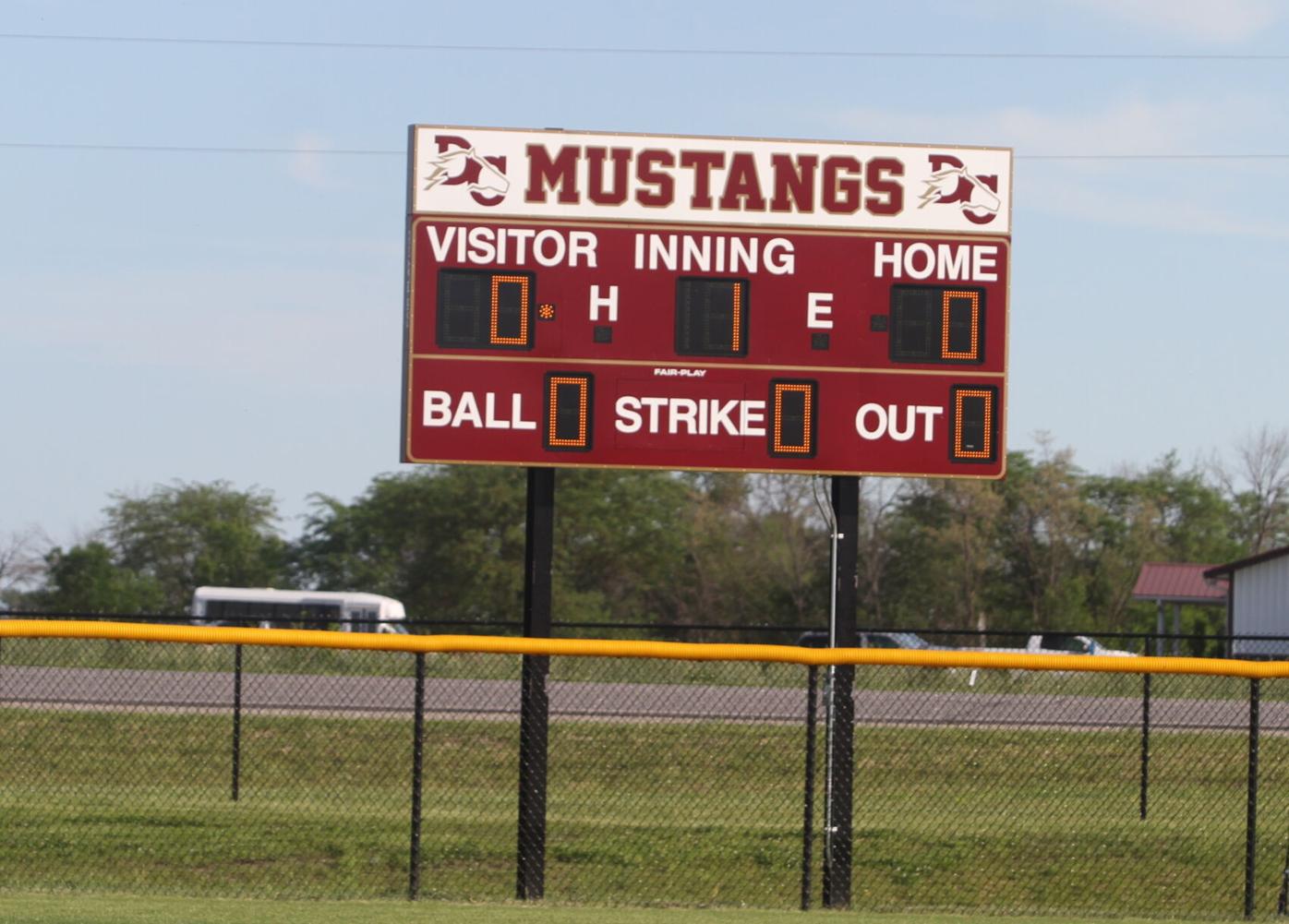 The new West Complex softball scoreboard before Davis County's first official varsity game began against the Knoxville Panthers on May 26. 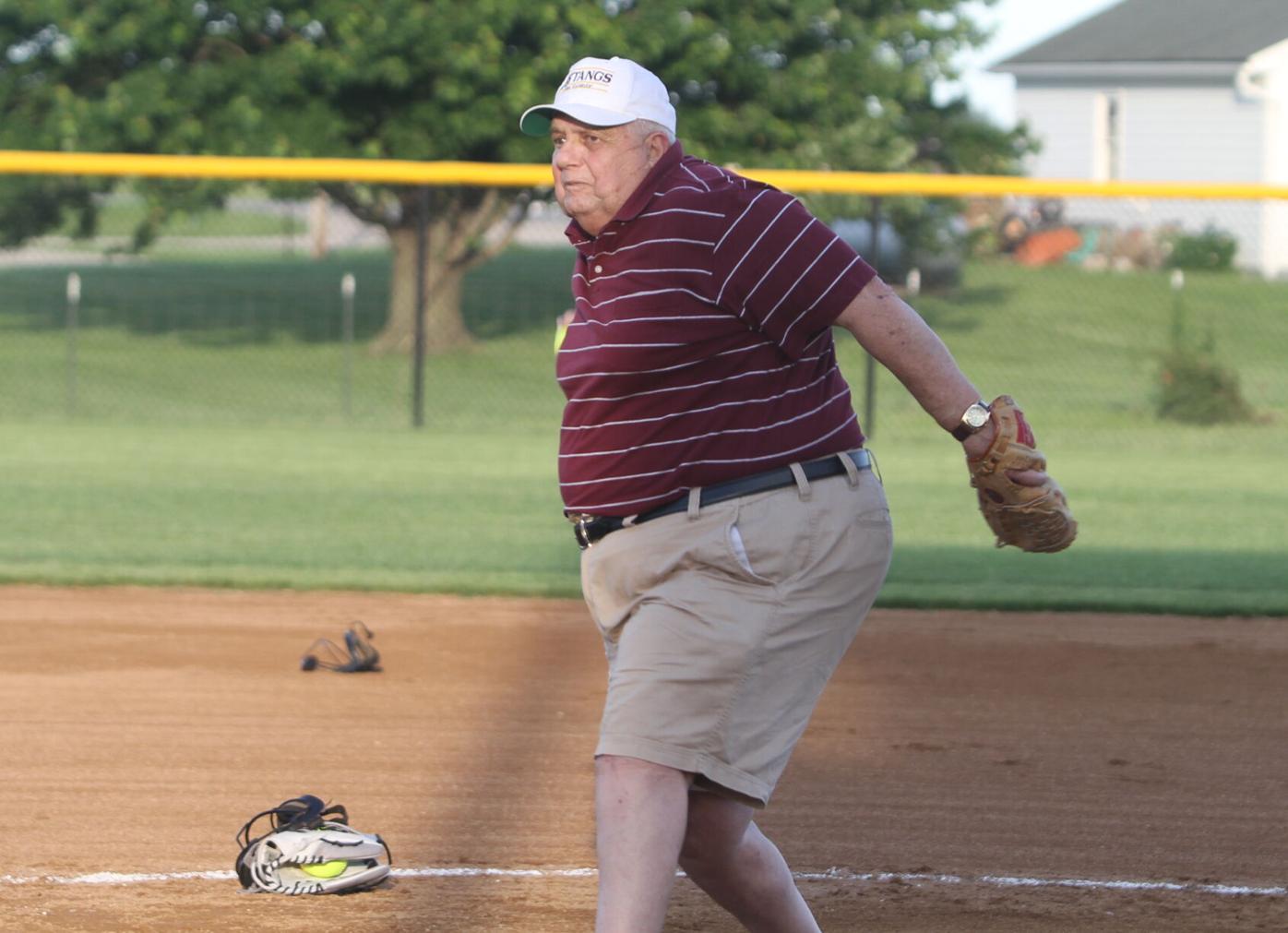 Former Davis County softball coach Cody Barnett throws out the ceremonial first pitch ahead of the Mustangs' 2020-21 home opener against Knoxville at the new West Complex on May 26.

Davis County softball head coach Zach Dunlavy stands with his team before the Mustangs' 2020-21 home opener against the Knoxville Panthers on May 27.

Madeline Barker gets set to pitch against the Knoxville Panthers on May 27 at the West Field Complex. Barker struck out 11 batters in the Mustangs' 7-3 win.

The new West Complex softball scoreboard before Davis County's first official varsity game began against the Knoxville Panthers on May 26.

Former Davis County softball coach Cody Barnett throws out the ceremonial first pitch ahead of the Mustangs' 2020-21 home opener against Knoxville at the new West Complex on May 26.

The Mustangs began their 2020-21 home opener at their brand new field at the West Field Complex in Bloomfield on Wednesday, defeating the Knoxville Panthers by a final of 7-3.

From the moment Mustang starting pitcher Madeline Barker stepped into the circle to throw her first official pitch at the team's new field, she felt right at home. And the Panthers would have to be on the receiving end of it.

Barker began her night by striking out the side with efficiency and command in the top of the first inning, a precursor to the kind of performance she would bring to the table by the game's end.

"Our team's been working hard this year and we needed a field to match that," Barker said.

Davis County capped off a 3-0 week by winning an extra-inning thriller in their first conference road game of the season. Caden VanLaningham and Sydney Henderson singled and scored in the top of the eighth at Centerville, lifting the Mustangs to a 4-2 win as the Redettes nearly rallied in the final inning of regulation to earn their first win of the year.

The Mustangs' offense would help out Barker, drawing first blood in the top of the second inning on Wednesday. A total of eight batters came to plate in the drawn-out inning, scoring four runs on four hits and one walk.

Davis County catcher Macy Hill drove in the first two runs for the Mustangs on an RBI single past a diving second baseman for the Panthers.

Mustangs head coach Zach Dunlavy enjoyed watching the train move along up and down the lineup in the middle innings. But he wasn't just pleased with the results ending in hits, as he was glad to see his team fight for every pitch.

"It wasn't necessarily the hits, it was the overall at-bats. We were grinding our at-bats and seeing lots of pitches," Dunlavy said.

Knoxville starter Ashlyn Finarty only lasted two and a third innings after throwing many extra pitches in deep counts, consecutive foul balls or after costly errors from her defense that kept the Mustangs' threat alive.

"It's pretty nice having an actual fence and not having a hill in the outfield," Dunlavy said. "It adds excitement and the girls were ready to play on it. The other field was not as exciting to come play on."

Davis County plated three more insurance runs in the bottom of the third thanks to two Panther errors, as well as a single and a walk before the inning was over.

Knoxville got on the board after a bases-loaded past ball, allowing Ciara Heffron to run home and score to make it a 7-1 ballgame. But Barker kept the damage to just the one run, striking out two more Panthers after the run scored.

As the Mustangs got ready to bat in the bottom half of the fourth, Barker had already put up seven strikeouts. And she wasn't done.

Acting as a complete opposite to Dunlavy, Knoxville head coach Carla Smith was not too pleased with how her team approached their plate appearances on Wednesday.

"We came to plate not really prepared for what [Barker] had coming," Smith said. "She'd go up and away against us and down at our knees. We just didn't adjust to the strike-zone and there's no excuse for that."

One of the biggest frustrations for the Panthers came in the top of the fifth, when they seemed to be knocking on the door of potentially starting a game-changing rally of their own.

Knoxville left fielder Olivia Madsdam started the inning with a single, only for her teammate Emma Dunkin to draw a walk shortly after.

In the next at-bat, Barker would end up striking out Heffron, then allowing a double from Finarty to bring Madsdam and Dunkin home to make it a 7-3 game.

Once again, Barker didn't let the opportunity last much longer for the Panthers.

With the runner on second and a chance for more runs looming, she struck out Melanie Sullivan on four pitches, ending the final threat the Panthers posed all night.

"The competition's not getting any lighter as we work through the rest of conference," Smith said. "We haven't played Albia, Eddyville or Clark and those are the top teams this year. If we played like we played [Wednesday] there's not going to be many chances."

Barker would end her night pitching seven innings with 11 strikeouts and securing the win in the process.

Dunlavy saw great command and precise location on many of the pitches from Barker in the victory and praised her for her ability to come up big in critical moments.

"Madeline did fantastic, she was locating very well with her rise-ball," Dunlavy said. "Her change-up was off and on, but she made big pitches when she needed to."

Barker dueled on Friday with Centerville senior Claire Mathews as both area hurlers allowed just one earned run in the first seven innings of their SCC battle. The Mustangs appeared poised to close out a 2-1 win in the seventh as Barker her seventh strikeout before Centerville staged a two-out rally to extend the game.

Riley Hawk reached on an error on what should have been the final out, before moving into scoring position on a single to left by Raegan Dell. After Kiera Klum drew a walk to load the bases, Ysabella Berja hit a ground ball to third that was misplayed, allowing Hawk to score the tying run.

Dell made a break for home on the same play, trying to score the winning run for Centerville (0-2, 0-2 SCC). Jalee Lough recovered and fired home to Mustang catcher Macy Hill, pushing the game into extra innings.

Davis County (3-0, 2-0 SCC) returns to SCC action on Tuesday hosting No. 12 (3A) Clarke in the first of three straight nights of action for the Mustangs at their new West Complex. Centerville hosts Knoxville, Davenport Assumption, Carlisle, Moravia, Seymour and Wayne on Saturday in their home tournament being held on the softball diamonds located next to Pat Daugherty Field on the Indian Hills Community College campus.