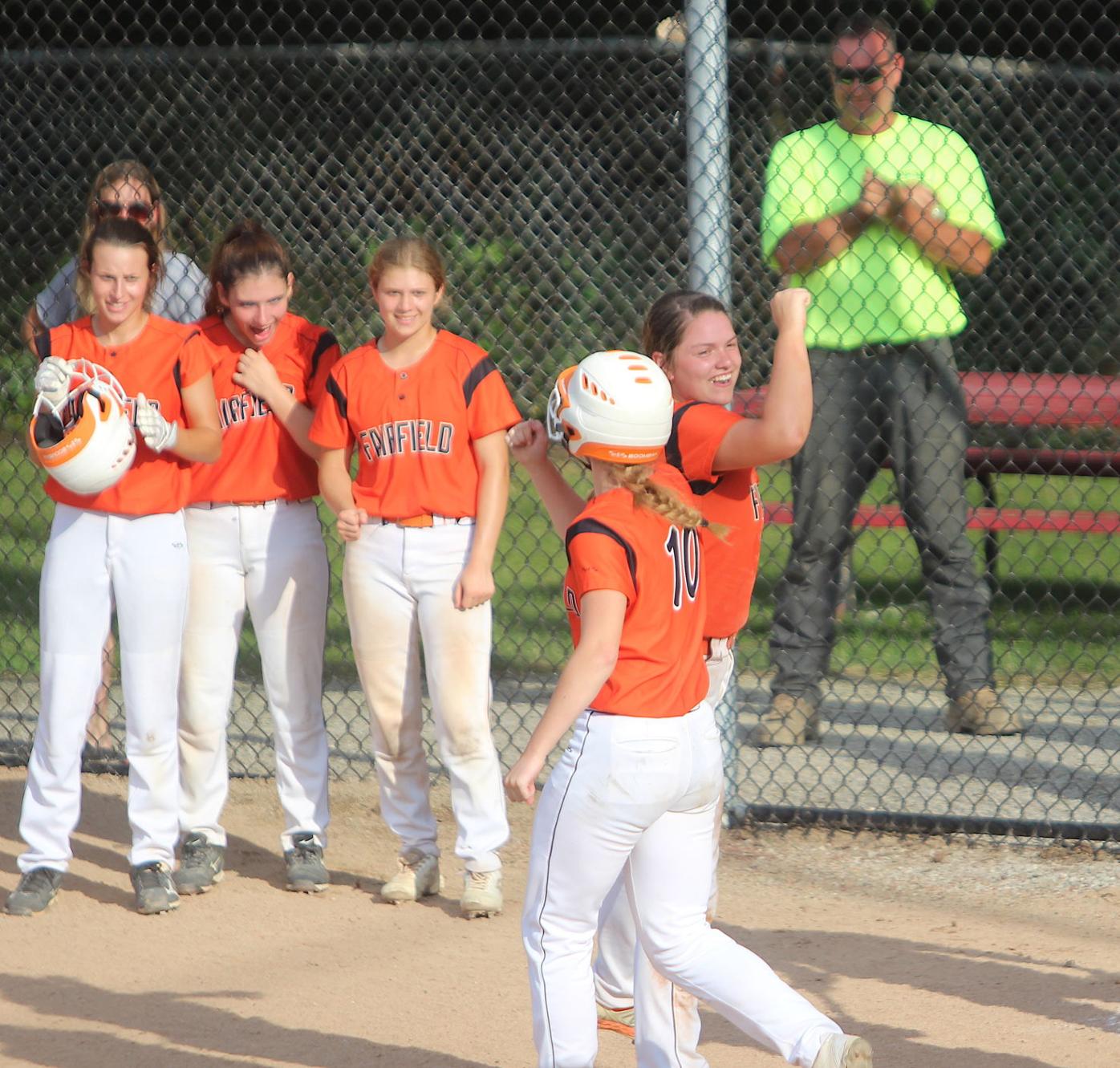 Members of the Fairfield softball team celebrate after Delaney Breen’s two-run home run against Ottumwa on Friday at the 46th Ottumwa Classic. 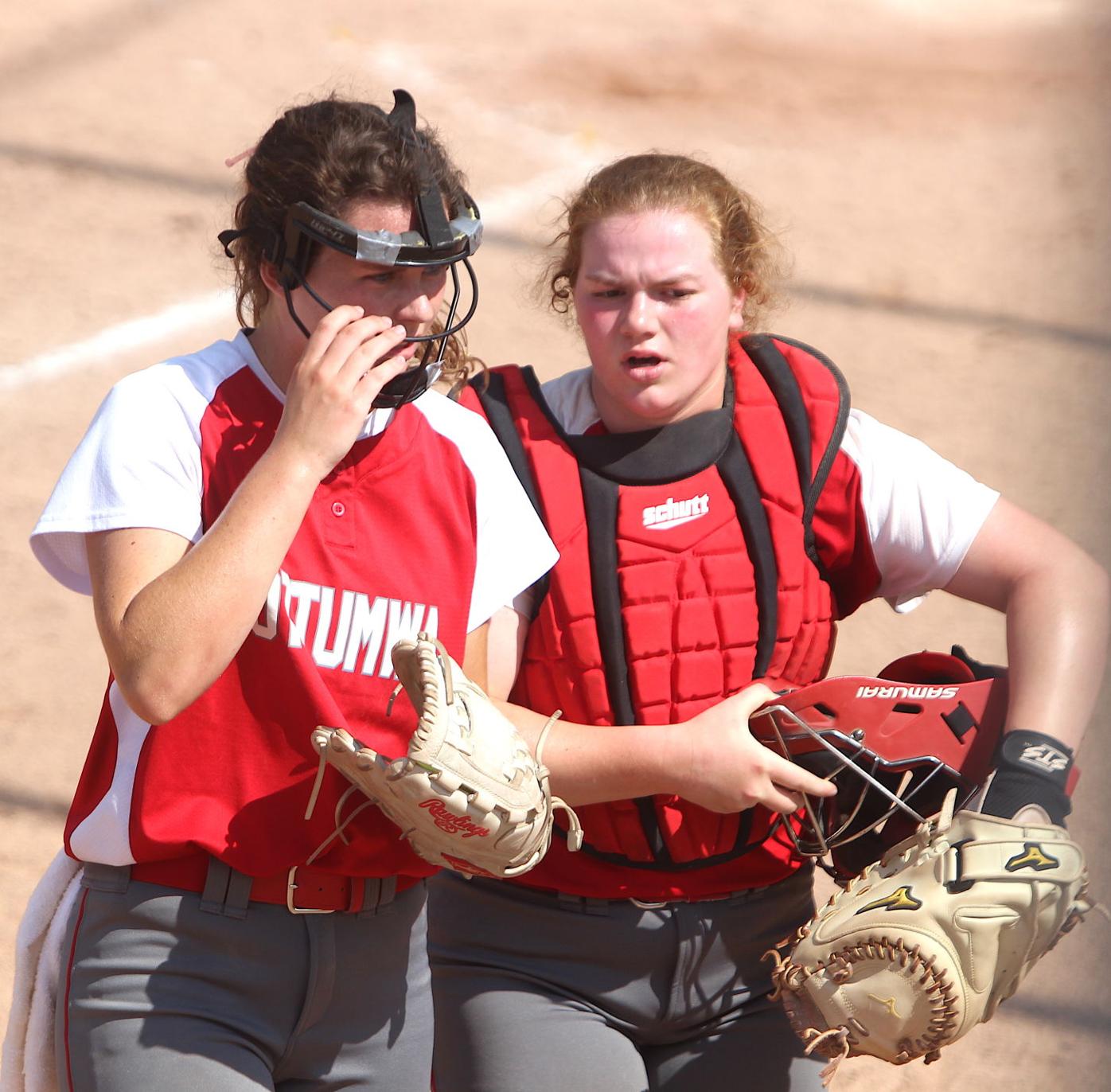 Ottumwa teammates Kacy Nickerson (left) and Amber Shotts (right) go over strategy during action against Davenport Assumption on Friday during the 46th Ottumwa Classic at Frank Huston Field in Ottumwa.

Members of the Fairfield softball team celebrate after Delaney Breen’s two-run home run against Ottumwa on Friday at the 46th Ottumwa Classic.

Ottumwa teammates Kacy Nickerson (left) and Amber Shotts (right) go over strategy during action against Davenport Assumption on Friday during the 46th Ottumwa Classic at Frank Huston Field in Ottumwa.

OTTUMWA — Four high school softball teams ranked in the top 10 walked into Frank Huston Field for the 46th edition of the Ottumwa Classic.

Only one walked out without a loss.

Ninth-ranked (4A) Fairfield struck early against both third-ranked (3A) Albia and 10th-ranked (5A) Ottumwa, scoring three runs in the first inning of both games. After avenging their only loss of the season, beating Albia 7-1 in the second game of the tournament, the Trojans finished the day earning a 5-1 win over the Bulldogs at Frank Huston Field.

“I’m glad we won our two games. The rest of the games (on Friday), I don’t care about,” Fairfield head softball coach Bob Bradfield joked. “We had to turn right around after playing a doubleheader at Washington the previous night. You never know in this heat when you play two days in a row how the kids are going to come back and perform.”

Ottumwa finished 0-2 on the day, falling in the third game of the four-game schedule to Assumption 4-3. The Bulldogs (12-7, 6-0 Metro) had a chance to tie Assumption in the final inning after a one-out double by Jordan Pauls.

Kacy Nickerson, who had two hits at the plate and retired the first 11 Assumption hitters in the pitching circle, moved Pauls to third with a groundout. Zoey Jones tried to beat out a ground ball to second that would have scored Pauls, but was thrown out by half a step by Assumption second baseman Olivia Wardlow.

“We got a lot of hitters on base. We just couldn’t figure out how to get those runners home,” Ottumwa head softball coach Mandi Moore said. “There’s always positives and negatives to take away from a day like (Friday). We hit the ball well at times, but we just didn’t quite have the energy we needed. That’s something we need to work on going through the rest of the season.”

Josie Lemonds paced the Bulldogs in the 46th Ottumwa Classic, collecting five hits including an RBI single in the third inning against Assumption. Pauls, playing in her first Classic, finished 3-5 on the day and scored Ottumwa’s lone run in the fifth inning against Fairfield on a sacrifice fly by Jones.

Fairfield senior pitcher Allison Rebling avenged her only loss in the pitching circle this year, holding Albia to just one run over six innings for the second time this season. Unlike June 16, when Jena Lawrence shutout the Trojans in a 1-0 Albia win, Fairfield (15-1) put up plenty of runs for Rebling drawing three walks from Mackenna Jones in the first inning.

Shay Drish scored as Jones struggled with her command early, coming home on a wild pitch as Fairfield scored for the first time in eight innings against the Lady Dees. Jenna Norris, who hit three home runs the previous night in a doubleheader sweep of Washington, drove in Coty Engle with a sacrifice fly to left before Danielle Breen kicked off a big day at the plate with a two-out RBI single to give Fairfield a 3-0 lead.

Rebling overcame just one mistake against Albia, allowing a solo home run in the third inning to Abbie Martin. The Fairfield senior pitcher allowed just five more hits to a powerful Lady Dee lineup with two walks while striking out seven batters. Rebling struck out Lauren Bayer before forcing Jones to ground out after Albia put the tying run on base in the fourth inning.

“We knew what Albia had coming in. It was just a matter of working my spots and trying to work the corners of the plate while mixing my pitches up,” Rebling said. “It was a really good game the first time we played Albia. We kind of wanted some revenge.

“We knew we could get hits off Jena if we faced her. Even when Jena came in for the last inning, we were still able to make contact. Our hitting has really come around since the start of the season. Everyone in the line-up come in and hit the ball really well.”

Both Danielle and Delaney Breen had run-scoring hits in the fifth, helping Fairfield put away the Lady Dees with a four-run rally. Danielle Breen would add a two-run home run in the sixth inning against Ottumwa before Rebling came on with two on in the bottom of the sixth, retiring the final six Bulldog hitters to earn the save in the Ottumwa Classic finale.

“The girls made a lot of plays. We had three double plays against Ottumwa and had some big hits throughout both games,” Bradfield said. “The bottom of our order came through on Thursday at Washington. That makes a big difference when the bottom half of the order can get some hits. It really sets things up for the top half of the order. That’s been an improvement on our team from the first week of the season.”

While Fairfield extended its current winning streak to 14 straight, Ottumwa went 0-2 in their home tournament scoring just four runs on 19 hits over 13 innings. The Bulldogs bounced back in a big way on Monday, sweeping Des Moines North 17-0 and 19-0 in a one-sided CIML Metro doubleheader with the winless Polar Bears.

The Knights (12-3) avoiding a fourth straight loss, scoring four times in the top of the sixth to edge OHS in the third of four games played at the 46th Ottumwa Classic. Kacy Nickerson retired the first 11 Assumption batters of the game and didn’t allow a hit until a two-out double by Maddie Loken in the fifth.

Katie Anderson’s one-out single in the sixth was followed by consecutive walks issued by Nickerson, bringing home a run to cut Ottumwa’s lead to 3-1 while keeping the bases loaded. After unsuccessfully trying to record a force out at home on a ground ball hit to second by Maddie Loken, Nickerson retired Sydney Roe on a pop out to short before pinch-hitter Lauren Loken delivered the decisive blow with a two-out, two-run single.

“It was a good lesson to learn going forward with our season,” Maddie Loken said. “We’re going to have that target on our back each game we play, so we’ve got to be ready to take everyone’s best shot.”

OTTUMWA [mdash]Joyce Ann Grace, 64, of Ottumwa, died at 8:50 a.m. August 4, 2020 at Hospice House in Ottumwa. Her body has been cremated. No services are planned. Reece Funeral Home is in charge of arrangements.