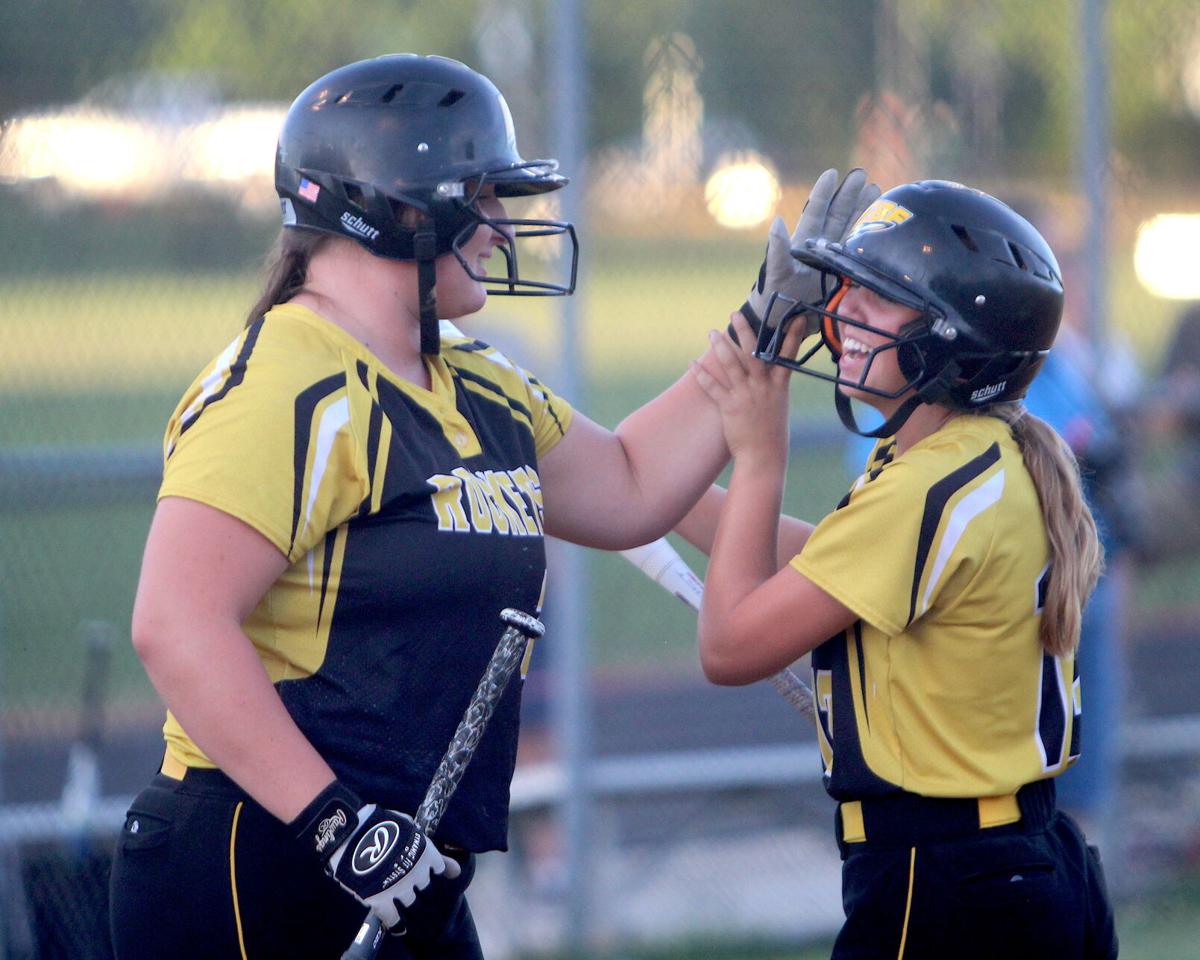 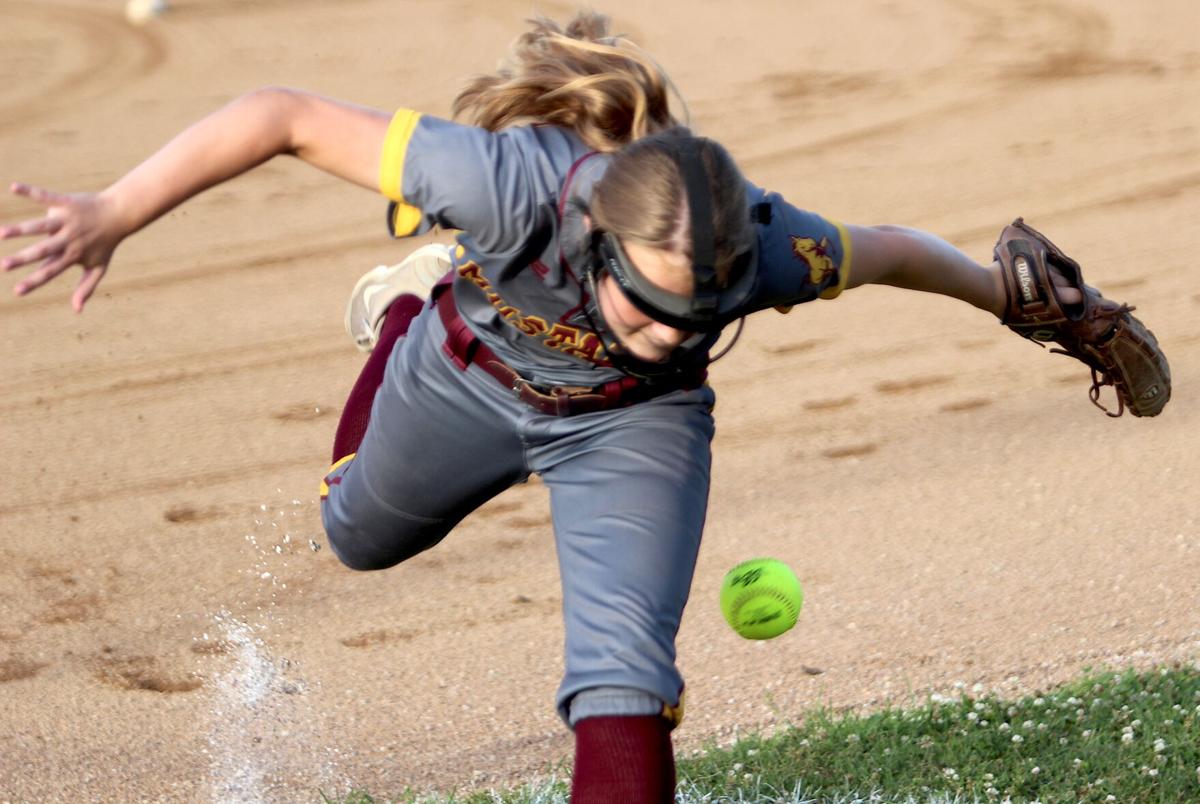 Davis County first baseman Madison Dunlavy cannot catch a shallow pop fly off the bat of Eddyville-Blakesburg-Fremont’s Faith Roberts, resulting in a two-out RBI single in the top of the first for EBF in a 5-1 win over the Mustangs in the Class 3A, Region 4 high school softball quarterfinals on Thursday night in Bloomfield.

Davis County first baseman Madison Dunlavy cannot catch a shallow pop fly off the bat of Eddyville-Blakesburg-Fremont’s Faith Roberts, resulting in a two-out RBI single in the top of the first for EBF in a 5-1 win over the Mustangs in the Class 3A, Region 4 high school softball quarterfinals on Thursday night in Bloomfield.

BLOOMFIELD — Madysen Wade can sympathize with teammates like Megan Lobberecht.

Five years ago, Wade put on black and gold uniform for the Eddyville-Blakesburg-Fremont softball team for the first time. Wade played in all 36 games that season, scoring 19 runs and stealing 10 bases while also striking out seven times in 15 at-bats and committing four errors in 21 fielding chances.

Ups and downs, just like Lobberecht has experienced this season as a newcomer to the Rockets. On Thursday, both the experienced senior and young eighth-grader came through with two-run hits that propelled EBF in a 5-1 regional quarterfinal win at Davis County.

Wade delivered the tiebreaking blow in the second inning with a two-out slap triple into left that brought home Brooke Shafer and fellow senior Eleanor Breon. Lobberecht then delivered the clinching blow, driving a two-strike pitch from Sydney Henderson over the temporary fence in center for a two-run homer in the sixth.

It was just one more thing that bonded Wade and Lobberecht, players at each end of the EBF roster in terms of experience.

“I was an eighth-grader when I started playing varsity. I’ve been there and I know that the mistakes that young players make,” Wade said. “My advice to Megan and all our eighth-graders has been to continue to have confidence in yourself. The girls work hard and they do great things.”

Wade knows what she’s talking about. Her eighth-grade season ended in heartbreak in 2016 when EBF lost a 10-inning regional final at Van Meter, 2-1, with Wade being thrown out in extra innings trying to score the run that might have lifted the Rockets to the state tournament.

The next year, as a freshman, Wade was part of the EBF softball team that came as close as any in program history to winning a state championship. The Rockets went 16 innings in the 2A state tournament finals with Iowa City Regina, losing a 4-1 lead in the 16th as the Regals rallied for a 5-4 win.

New teammates have joined the chase to get back to state and contend for that elusive championship. Thursday’s win was the 126th victory that Wade has been a part of as a member of the Rockets’ varsity softball team, extending her career to a 172nd game with the Nevada Cubs presenting a brand new challenge on Friday night in the Class 3A, Region 4 semifinals.

“I don’t think we’ve ever played Nevada,” Wade said. “It’s another game. We’re taking it one game at a time. We’ll be ready to play.”

EBF (13-8) returned to Davis County for what proved to be the final game on the makeshift softball diamond just across the track from the Mustangs’ football field after suffering a stunning 9-5 loss to the Mustangs back on June 29. The Rockets committed five errors, allowing Davis County to build a 4-1 lead after three innings before answering a four-run rally in the top of the fourth by EBF with four runs in the bottom of the inning.

Thursday’s postseason rematch went much differently. EBF played from ahead all night, committing just one error on a low throw by starting eighth-grade pitcher Brooklyn Bettis who answered back by striking out Jalee Lough before Sydney Henderson was robbed of a potential RBI hit on a diving catch in left by junior Brooke Shafer, protecting a 3-1 EBF lead.

“We knew we didn’t play our best when we came down here last time,” EBF head softball coach Tony Fenton said. “We’ve worked on our fielding quite a bit since then. We just needed to come down here and play as well as we’re capable of playing.”

Wade scored on a two-out RBI hit by Faith Roberts that just dropped in fair past Mustang first baseman Madison Dunlavy in shallow left, giving EBF a 1-0 first-inning lead. Davis County would answer back with a two-out rally of their own as Briley Lough singled, moved to second when Jalee Lough was hit by a pitch and scored when Henderson was able to drop a slap hit into shallow right for a game-tying RBI single, showing the resiliency that has allowed Davis County to post the program’s first winning season since 2005 despite an 0-4 start to the year.

“We’ve done some good things this year. We’ve really been playing well the last 12 or 13 games,” Davis County head softball coach Zach Dunlavy said. “Nobody that I’ve talked to around the program now or in the past can remember the last time the softball hosted a postseason game, so there was definitely a lot of excitement going in for us.”

Wade turned all that excitement over to the EBF side of the field, slapping a triple that eluded the Mustangs (10-8) down the left field line to put the Rockets ahead for good. After Bettis stranded Mustang base runners at second in three straight innings, Lobberecht stepped up to give her classmate and fellow pitcher some breathing room fouling off several pitches before finally driving a pitch out of the park for her second career home run, giving EBF a four-run lead.

“Being a pitcher, I can kind of tell what pitch I’d want to throw in that type of a situation,” Lobberecht said. “I was kind of seeing where (Henderson) had been pitching it and where she might look to pitch the ball the rest of the game. I was looking for a ball that was low. That’s my ideal pitch to hit. I was thankful I got one that I could finally get a drive on.”