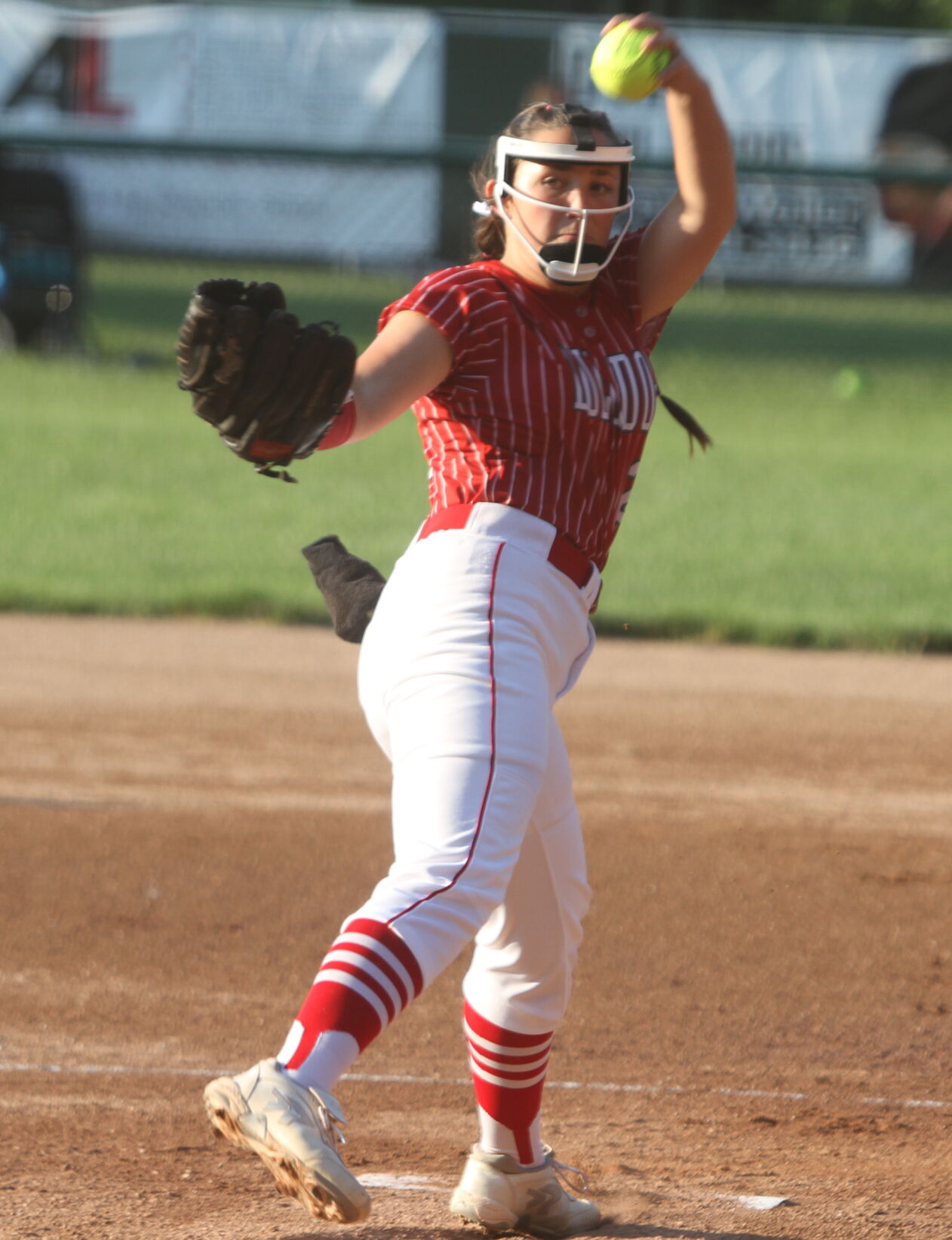 Ottumwa sophomore Ashlynn Sheets winds up to throw a pitch against Iowa City West during the Class 5A regional tournament at Frank Huston Field in Ottumwa on July 8. 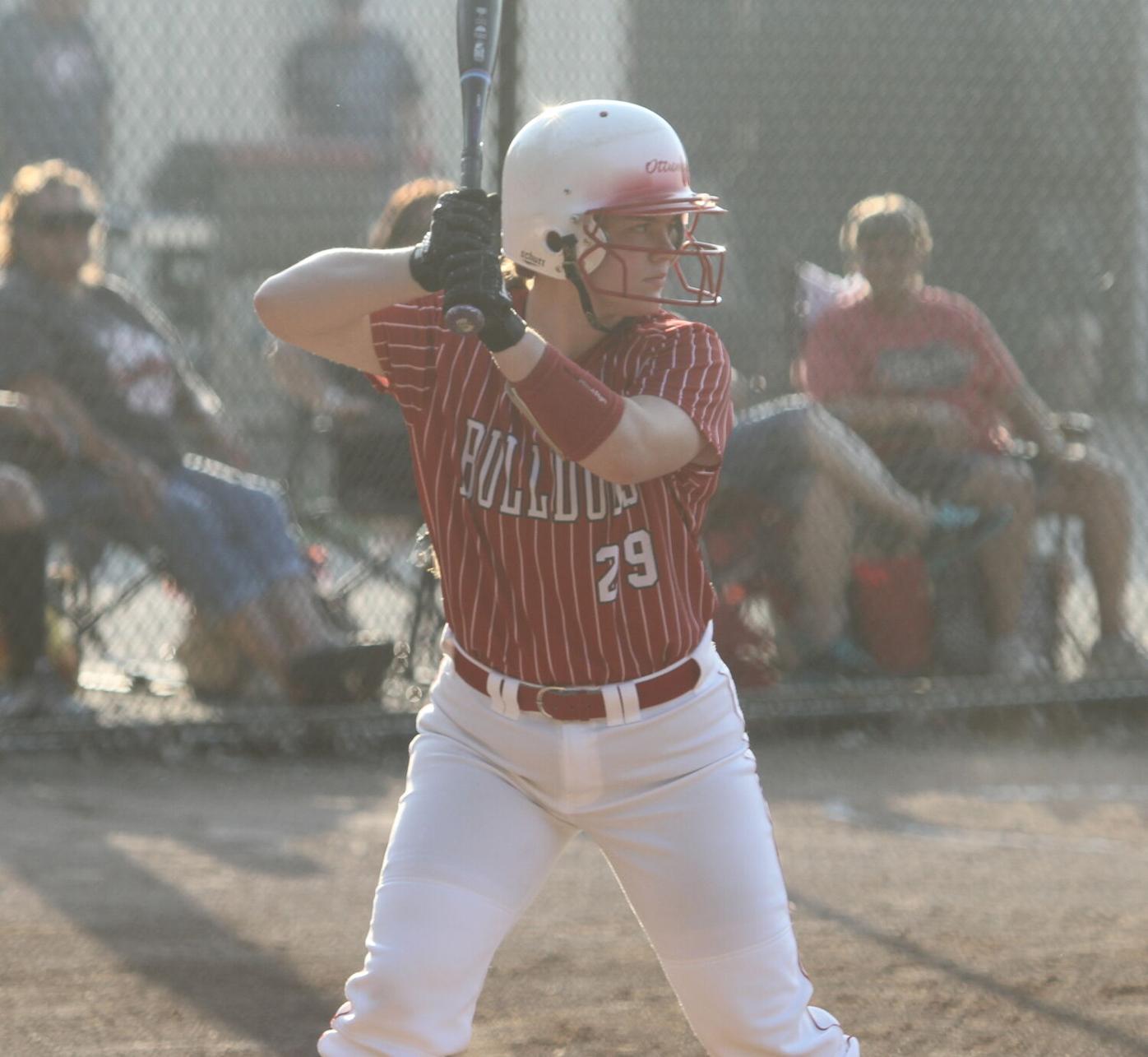 OTTUMWA — Ashlynn Sheets could feel the nerves in the first inning in the Bulldogs' 5A Region 8 quarterfinal against Iowa City West on Thursday.

The Bulldogs' ace entered the circle with a 1.73 ERA and 129 Ks in her first season on varsity, but trouble came about early for Sheets. The Trojans smacked four hits off Sheets in the first inning, a rare dent in Sheet's relatively shiny armor to start games off this season. Luckily for the Bulldogs, Sheets settled in and gave up one run in the first, putting Ottumwa in an early 1-0 hole.

"It was kind of nerve-racking the first inning, but I just realized I had to buckle down a little bit and trust my defense behind me and that our bats would get going," Sheets said.

But the Bulldogs' bats came to life in the first inning as well, with Zoey Jones and Ella Allar leading off with two-straight singles. Ottumwa sophomore Jordan Pauls would drive in Jones on a RBI single, tying the game up 1-1.

And then everything changed.

Amber Shotts entered the box for the Bulldogs with two runners on and a chance to take a lead from the jump. Shotts did more than take the lead, she gave the Bulldogs the spark they needed to carry them to victory. The junior sent a towering three-run home-run to center field, bringing the home crowd to its feet and her teammates to meet her at home plate. It was 4-1 Bulldogs after the first inning.

Shotts would add a fourth RBI to her night later on in the game, but could feel her home-run gave the Bulldogs exactly what they needed to push them toward victory.

"I had great hits against [Des Moines] Roosevelt [on Monday] but just kind of went straight to them," Shotts said. So as soon as I hit that it was like a relief and I was like, 'Out of the slump. I can do this. We can put this together.'"

Ottumwa head coach Mandi Moore knew from the moment the ball left the yard, the Bulldogs would be able to ride that energy the rest of the night.

Moore said Sheets' first-inning was a product of the added stress of the post-season, with win-or-go-home games making execution crucial. Moore could see Ottumwa needed to calm down and get on the board.

And after Shotts delivered like she did, Moore said the timing couldn't have been better.

"Amber's hit couldn't have had better timing. That's what we needed to give us an even bigger kickstart of energy that kind of led us through that entire game," Moore said.

After Shotts' blast, Sheets took it from there and settled in the rest of the night. After her shaky first inning, the sophomore would go on to toss six shut-out innings with four strikeouts. But where Sheets showed her poise was when the Trojans had multiple innings against with runners in scoring position.

Sheets said she allowed herself to settle in and hit her spots like she knew she could for the rest of the game. And while the Bulldogs haven't fully scouted Muscatine quite yet, Sheets said they should be able to hang with Muscatine if they keep up they're steadiness at the plate and in the circle.

"I see us competing very well with [Muscatine]. It'll probably be a close game and we just got to continue what we're doing," Sheets said.

The Trojans couldn't push one through on Sheets when they needed it most. West left the bases loaded in the third inning, left runners on second and third in the fourth, and left a runner on third in the sixth. The Trojans would strand 12 baserunners in the 5-1 loss to Ottumwa.

"This was a good intro to what Muscatine might look like because I'm sure they'll have runners on. They're a top-ranked team obviously," Moore said. "Feeling that pressure was a good test for Saturday for [Sheets]."

Moore said the Trojans gave Ottumwa plenty to work on heading into Saturday against the No.1 team in 5A.

After catching for Sheets all season and after Thursday's win, Shotts gave her confident assessment of what she expects out of Sheets come Saturday.

"It's through the roof. I have full confidence in [Sheets]," Shotts said. "She hit her spots great. She read the umpires' box just right. She was hitting spot on. He even was agreeing with me, he's like, 'I'll call that all night.'"

Winner will play No.1 (5A) Muscatine at Muscatine Kent-Stein Park on Saturday at 7 p.m.