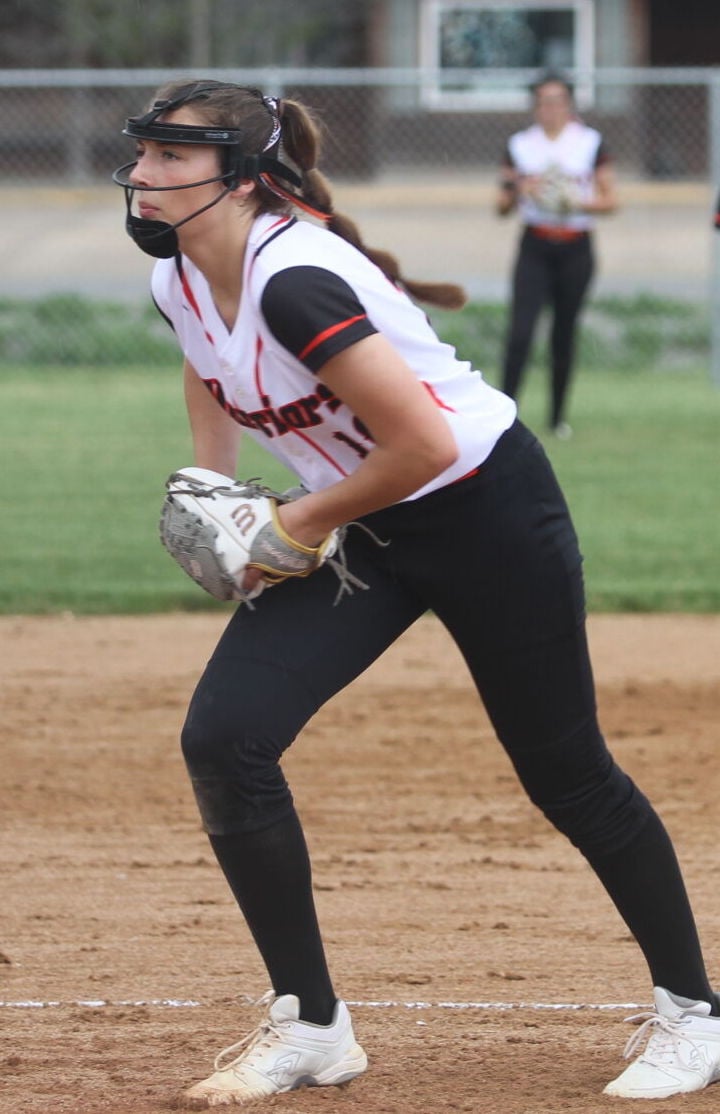 Van Buren pitcher Chelsey Huff winds up to throw a pitch against the Pekin Panthers on May 25. Huff struck out 12 batters in a 7-1 win. 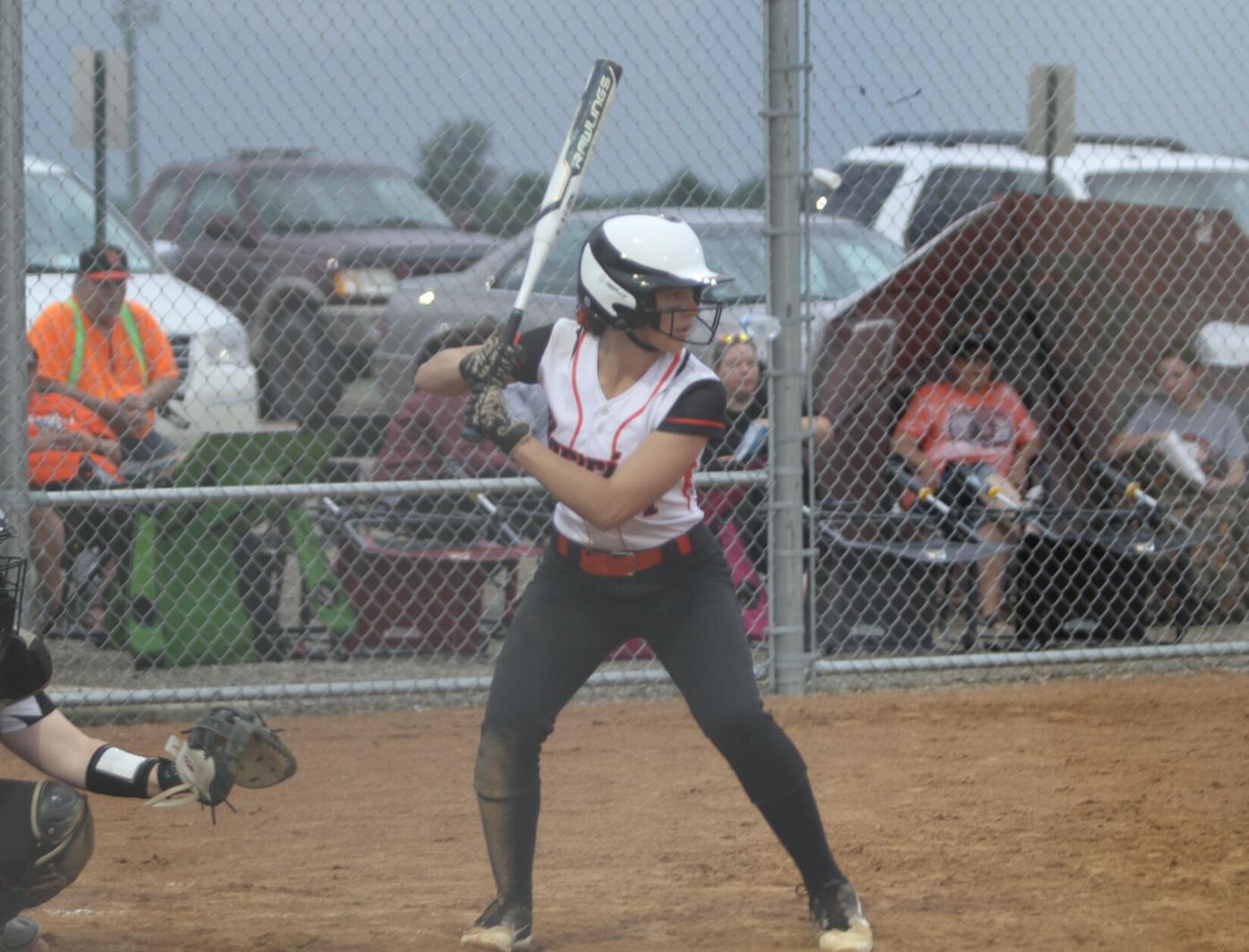 Isabel Manning stands in the batter's box in Van Buren's 7-1 win over the Pekin Panthers on May 25. 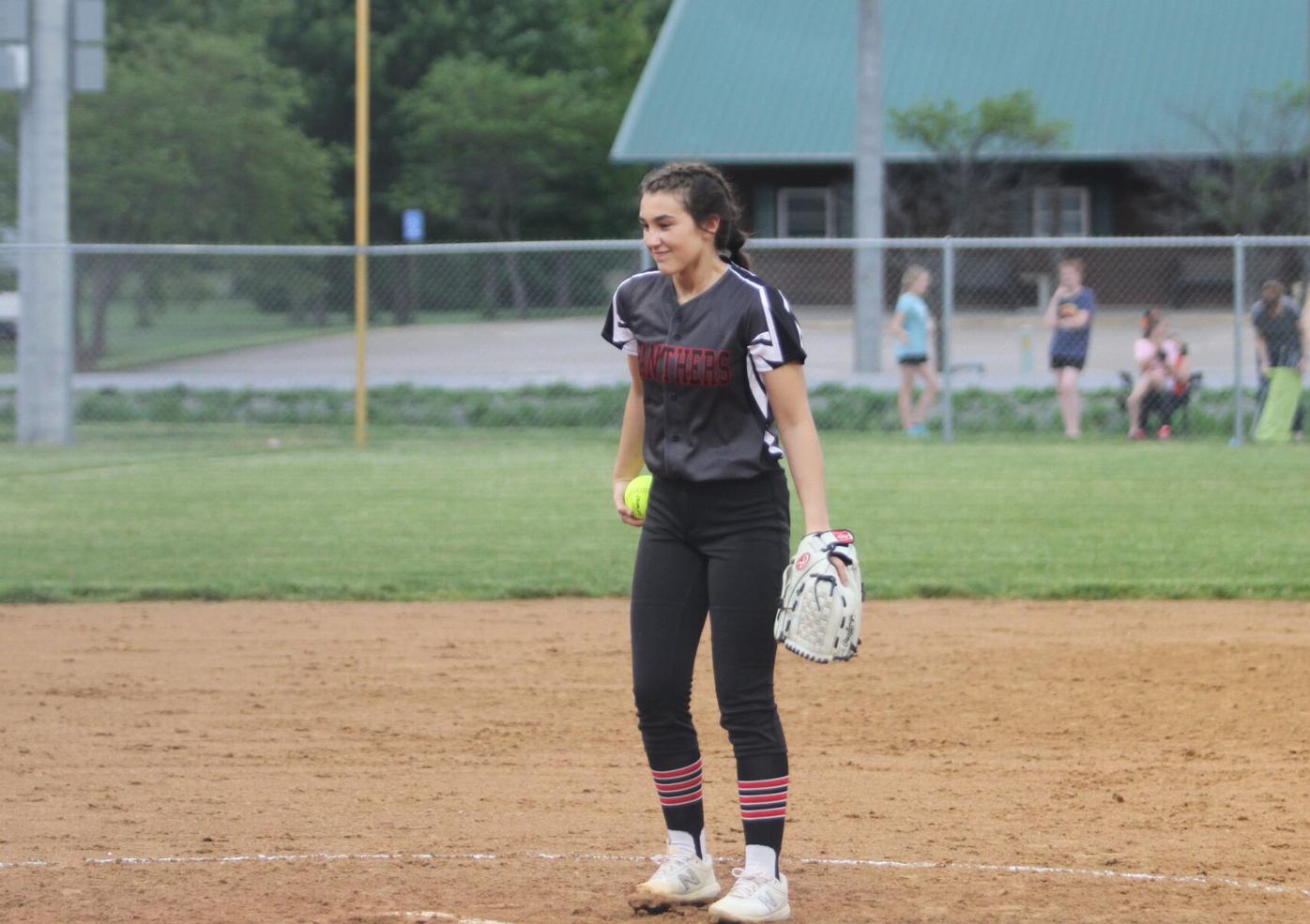 Pekin sophomore Brooke Miller gets ready to throw a pitch against the Van Buren Warriors on May 25.

KEOSAUQUA — After thunder delays, pesky rainfall, and an eventual lightning delay and downpour, Van Buren Warriors softball ran back to its bus with a convincing 7-1 victory over the Pekin Panthers Tuesday evening.

The Panthers and Warriors were originally scheduled to play in a double-header, but Mother Nature had other plans at Manning Field.

Van Buren wasted no time getting the scoring started, with the top of its order starting what would end up being a big night for itself.

Warriors third baseman Isabel Manning began her night with a single up the middle of the infield, past the diving glove of Pekin shortstop Claire Roth. Brooklynn Cormier would advance Manning on a fielder's choice, only for Van Buren pitcher Chelsey Huff to smack a double, bringing home Manning.

Manning would eventually advance to third base until Warriors first baseman Annabell Cormier brought her home on an RBI ground out. With just one half inning down for the Warriors, it was already a 2-0 lead.

"Our lineup is doing great, all of us are hitting and I think when one person hits it strings down the line and I think we're off to a really good start so far," Manning said after a nine-hit night as team for the Warriors.

Van Buren head coach Randy Smith said the top of the order will be the consistent producers at the plate for the Warriors this season, but was encouraged after his team's six-run victory that the offense could come from just about anyone they bring up to the plate on a given night.

Smith's optimism was reflected in the boxscore after the win, with five of the team's nine hits coming from two sophomores and two eighth graders to open the season.

"We hit up and down the lineup and it'll be a different kid every night for us which is good," Smith said.

On the other side of the diamond, Pekin had five underclassmen starting in its lineup, some in their first game on the varsity roster, including starting pitcher Brooke Miller.

Miller managed to strikeout four batters on the night, but gave up 12 hits and allowed three walks.

Pekin head coach Shelby Atwood said the tough outing came from the lack of experience at the varsity level for Miller, but given time and a game that doesn't find itself being rained out like the Panthers' first two games of the season have gone, she sees the sophomore finding her stride as the season continues.

"This is Brooke's first year with us so it was tough obviously tonight, but she'll be fine and find a groove later on," Atwood said.

Pekin senior Erika Coleman scored the only run of the game for the Panthers after her double in the top of the fourth inning was cashed in by fellow senior Taylor Parmenter's single.

Much like the pitching, the offensive struggles came from a lack of experience in Atwood's assessment, but the Warrior's ace in Huff didn't exactly provide many opportunities for the Panthers to pounce on.

"We started all of our rallies with two outs against us so that left us at a disadvantage," Atwood said.

Huff, the Warriors' starting pitcher, struck out 12 batters, one day after fanning 12 in Van Buren's win over the Columbus Wildcats on Monday.

The hot start for Huff didn't come as surprise to Smith considering how her first start went against the Wildcats. In fact, he's come to expect it over the last four years.

"She's thrown for a million years, I mean she's a senior and been our ace for four years now," Smith said. "She uses her drop ball, her fastball and her changeup, so it'll be tough for any hitter against her."

Van Buren (2-0) will travel to play West Burlington-Notre Dame on Thursday in the Southeast Iowa Superconference south division opener for the Warriors at 7 p.m. Pekin (0-1) will hit the road as well on Thursday, taking on the Wapello Arrows in the SEISC north opener for the Panthers starting at 7 p.m.