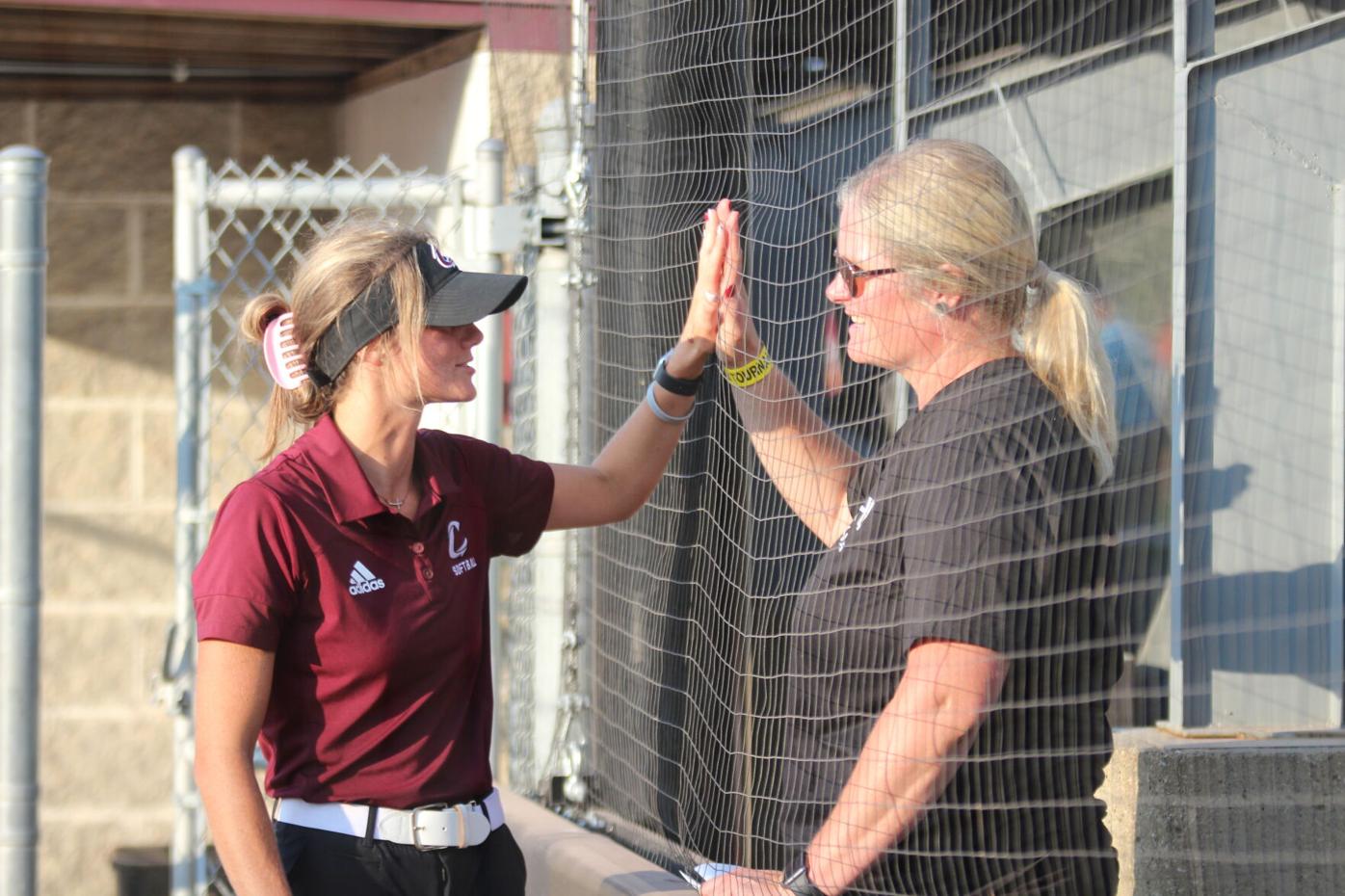 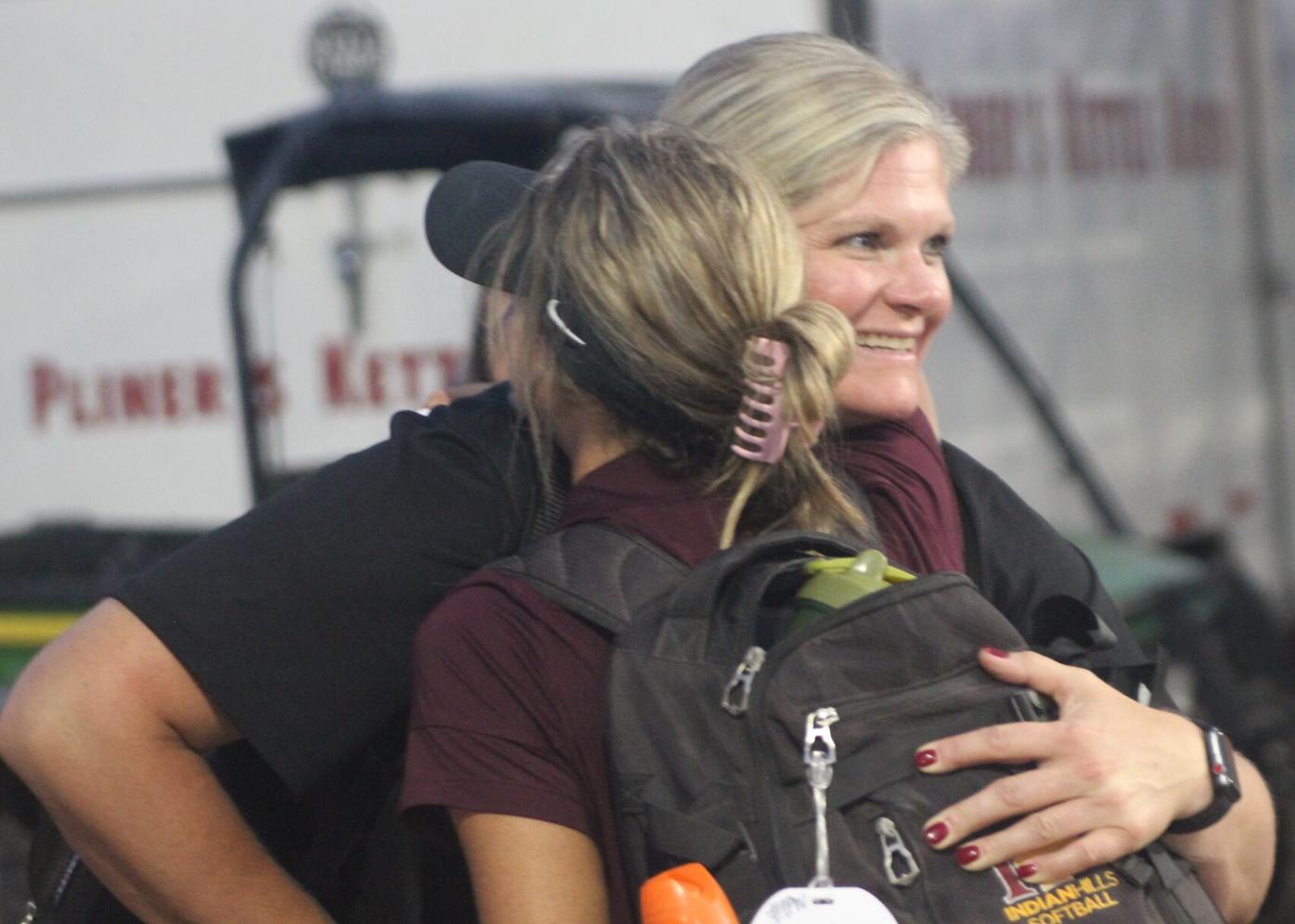 Current Indian Hills head softball coach Lindsay Diehl gives her former player both at Clarke and IHCC, Vanessa Bakley, a hug outside Kruger Seeds Field inside the Harlan and Hazel Rogers Sports Complex on Monday night in Fort Dodge during the Class 3A portion of the Iowa High School State Softball Tournament. Bakley has followed in Diehl's footsteps, completing her first season as head coach at Clarke where she also played for Diehl. Clarke finished a 17-12 season splitting two games at state, bouncing back from an 11-1 loss to Davenport Assumption on Monday to win 4-2 in the consolation round over Atlantic.

Current Indian Hills head softball coach Lindsay Diehl gives her former player both at Clarke and IHCC, Vanessa Bakley, a hug outside Kruger Seeds Field inside the Harlan and Hazel Rogers Sports Complex on Monday night in Fort Dodge during the Class 3A portion of the Iowa High School State Softball Tournament. Bakley has followed in Diehl's footsteps, completing her first season as head coach at Clarke where she also played for Diehl. Clarke finished a 17-12 season splitting two games at state, bouncing back from an 11-1 loss to Davenport Assumption on Monday to win 4-2 in the consolation round over Atlantic.

FORT DODGE – It had to be a little unusual for Lindsay Diehl to be watching Vanessa Bakley from the stands Monday night during the Iowa High School State Softball Tournament.

For so many years, the view was from the third base coaching box and from the dugout where Diehl would watch Bakley go to work both as a player for Diehl at both Clarke High School and Indian Hills Community College. On Monday, it was Bakley that stepped into the third-base coaching box for the first time inside the Harlan Rogers Sports Complex coaching the school both she and her former head coach graduated from.

In the end, upset-minded Clarke could not prevent Davenport Assumption from moving forward in what would ultimately be the journey to a fourth Class 3A state softball title in five years. The top-ranked Knights scored three times in the first inning and never looked back on Monday, winning 11-1 in six innings over the Indians earning the first of three wins this week in Fort Dodge.

Bakley was the last person to walk off Kruger Seeds Field on the first night of the 2021 Iowa High School State Softball Tournament. Just like so many times as a player, Bakley was warmly greeted with a hug by Diehl for the great effort shown on the diamond no matter what the scoreboard said by the end of the night.

"It was definitely a different perspective not being on the field when the Clarke Indians are playing," Diehl said. "If anybody's going to be leading them and running the reigns, I want it to be Vanessa. I kept watching her out there and I kept thinking that she paid attention during her time playing for me and she's made it her own.

"I was proud that she and the girls made it here. She's going to make a great coaching career for herself."

Bakley was back on the field at a state softball tournament for the first time since her sophomore season playing for Diehl at Clarke in 2015. Just one year earlier, as a freshman, Bakley earned all-tournament honors while helping the Indians win the 3A state softball title with a 7-6 win over Bondurant-Farrar in the 2014 state finals.

"Coach Diehl is always helping us out. She even drove our equipment trailer up here," Bakley said. "I can't thank her enough for everything she's done for me and taught me."

As Bakley continued to talk about her former coach, it was hard to hold back her emotions.

"Everything I'm doing now is everything that Coach Diehl taught me," Bakley said, trembling while holding back tears. "I couldn't be more thankful for our relationship."

Bakley is proving to be the spitting image of her former coach, showcasing many of the same traits that has helped Diehl find success both at Clarke and Indian Hills, where the Warriors have won 93 of 130 games in the past three seasons including two regional regular-season and postseason titles as well as a district title and an eighth-place finish in the 2019 NJCAA Division I National Tournament. Keeping a positive mindset is a common link between Diehl and Bakley, who showed the same amount of encouragement to the Clarke players on Monday night before the game and through all six innings, even as Assumption built on their early 3-0 lead.

"Everything I know about this is from Coach Diehl. I'm not repeating what she's saying. I've internalized it and I trust it. We rely on it. It's not just the same things that have come from Coach Diehl, but it's the things I learned from her," Bakley said. "Our mental game has grown so much, from focusing on the next pitch. Those are the things that Coach Diehl taught me. It's what I try to relay to the players now."

Bakley was reminded on Monday just how tough it can be at times to communicate with her players at the state tournament. Huge crowds on both diamonds created plenty of noise, forcing Bakley to shout her coaching instructions from the third-base coaching box to Clarke's first-base dugout.

"No one can hear you up here," Bakley joked.

Of course, Diehl knew from experience that Bakley's voice would certainly carry regardless of the crowd noise.

"When she played for me, Vanessa was by far the loudest player in the dugout," Diehl said. "That's the thing I remember the most about coaching her. Everyone would always ask me about my shortstop. She drew attention to herself because she played the game with passion and fire. That's how she coaches. She wears out that third-base box. She's coaching every pitch. Because of that, her kids have grown a ton. From where they started off to where they've finished, it's pretty phenomenal to measure that growth."

Clarke would finish Bakley's first season at the helm with a final record of 17-12. The Indians went out on a winning note Tuesday, topping Anamosa 4-2 on the Veterans Diamond in a Class 3A consolation game to finish in a tie for fifth at state.

"We talk a lot about owning our roles. My role now is to get these girls ready to go and tell them all the things they need to know," Bakley said. "It's not much different for me because I've been doing that for awhile, but I do miss being out actually playing on the red dirt."

"I'm just trying to teach these girls how to Fort Dodge because we will be back."

"They break down every huddle saying 'Fort Dodge,' but many of these girls hadn't experienced Fort Dodge until this season," Diehl said. "To walk through those gates and be here, those girls now are going to have a different understanding of what they're working towards each year. This experience, from the returning players to the young kids watching from the stands, builds that culture that Vanessa wants to have. It's the type of dynasty that Davenport Assumption currently has. This experience is going to hold a lot of value in building that dynasty for Vanessa with her program.

"Only eight teams make it to state all year. We may not get to win a state championship this year, but we're not done," Bakley added.

Both Bakley and Diehl were very emotional at the conclusion of Monday's state tournament opener, signs of a long-term relationship that started well before and has continued well after Bakley's days suiting up for Diehl as a member of the Clarke and Indian Hills softball teams.

"It would be an understatement to say Vanessa and I talk on a daily basis. We talk every day. She'll call and ask for my advice on anything. I feel fortunate to be able to pass that knowledge on to her," Diehl said. "She's constantly trying to grow and learn. She's never been satisfied with being okay. She's going to take the experience and want more for it.

"I always talk about my players as my kids, but if there's one player I consider one of my kids the most, it's Vanessa. I was her long-term substitute teacher in sixth grade. I made her hold my hand walking down the hallway because she's couldn't keep her hands off stuff messing with people. I'm still trying to help guide her even to this day."

MONTGOMERY [mdash] On Monday, September, 13, 2021, Melvin Lee Roy Johnson passed away at the age of 81 following a long battle with cancer. Melvin was preceded in death by his wife of 37 years, Patsy Ann Johnson, who passed away February 29, 2004. He is survived by wife of 14 years, Joyce Th…