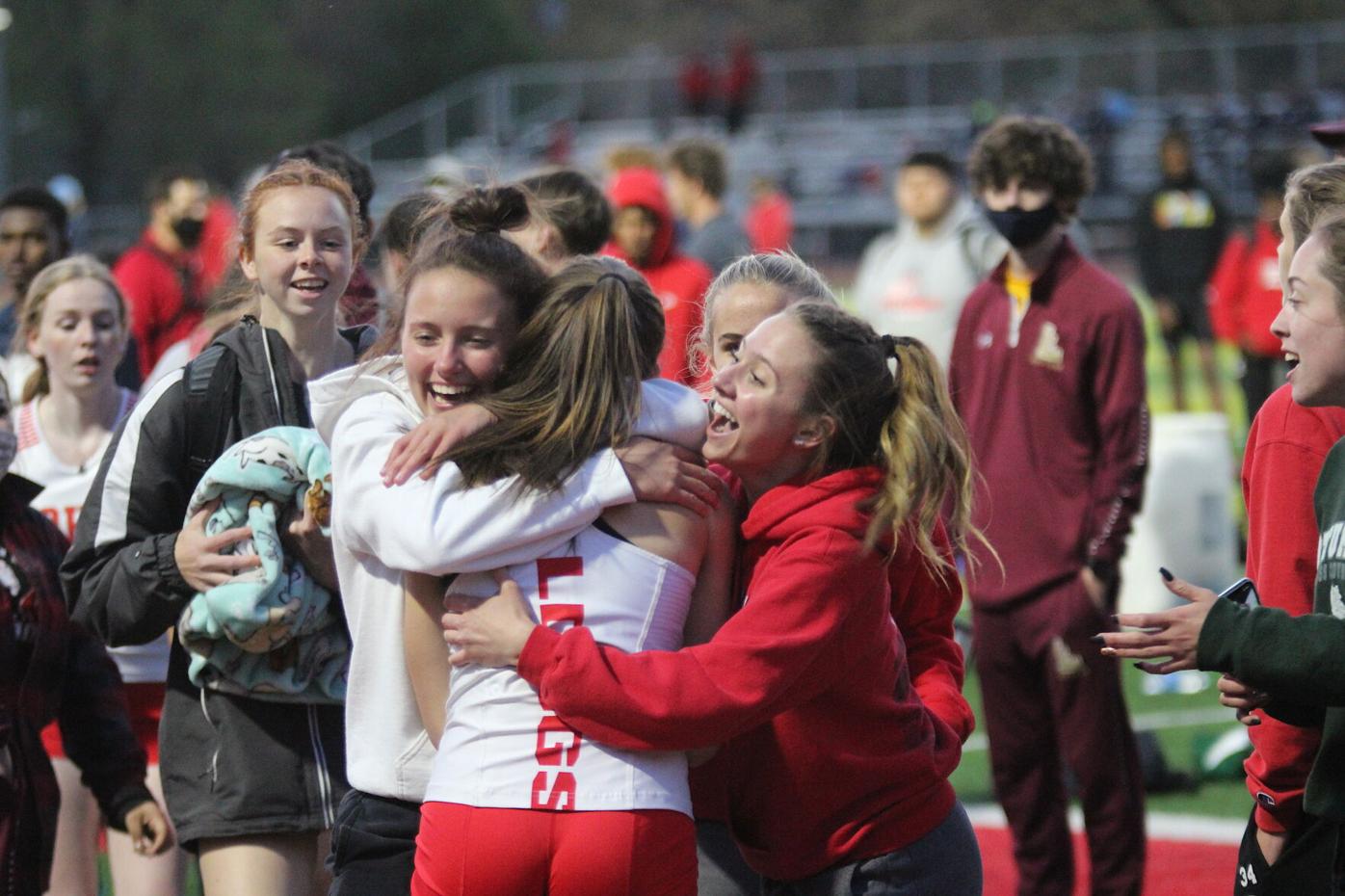 Members of the Ottumwa High School girls track and field team greet senior Meghan Coulter after anchoring a comeback win for the Bulldogs in the 4x400 relay race on Tuesday night at the CIML Metro Conference meet at Schafer Stadium in Ottumwa. Coulter won four conference titles in four races, anchoring the 4x400 and distance medley relays while opening Ottumwa's winning run in the 4x800 and running an OHS Hall-of-Fame time of 1:09.35 in the 400-meter hurdles. 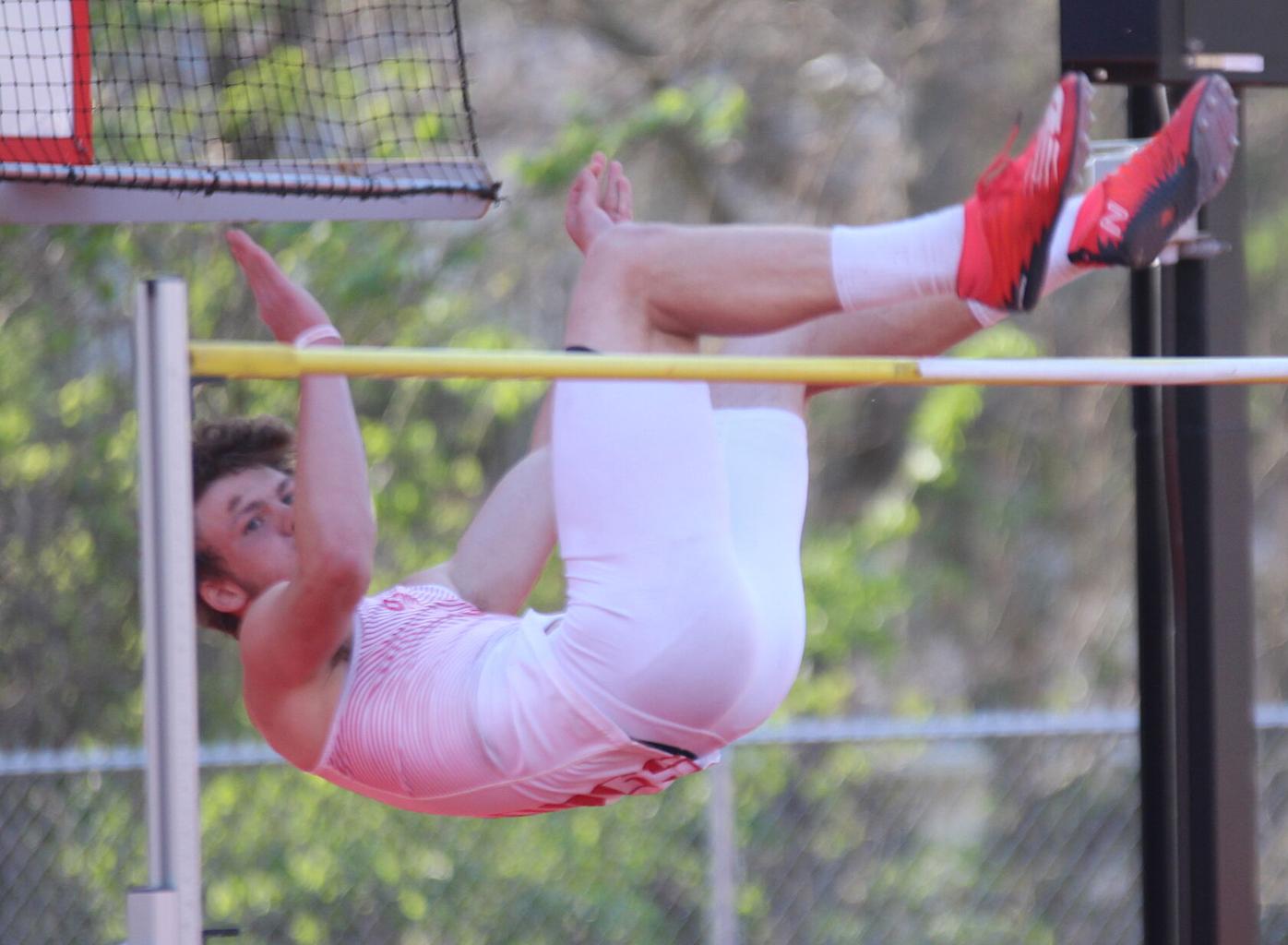 Austin Fountain clears the bar at an Ottumwa High School hall-of-fame height of 6-2 on his third attempt Tuesday, winning the CIML Metro Conference boys high jump title for the Bulldog boys track and field team at Schafer Stadium in Ottumwa.

Members of the Ottumwa High School girls track and field team greet senior Meghan Coulter after anchoring a comeback win for the Bulldogs in the 4x400 relay race on Tuesday night at the CIML Metro Conference meet at Schafer Stadium in Ottumwa. Coulter won four conference titles in four races, anchoring the 4x400 and distance medley relays while opening Ottumwa's winning run in the 4x800 and running an OHS Hall-of-Fame time of 1:09.35 in the 400-meter hurdles.

Austin Fountain clears the bar at an Ottumwa High School hall-of-fame height of 6-2 on his third attempt Tuesday, winning the CIML Metro Conference boys high jump title for the Bulldog boys track and field team at Schafer Stadium in Ottumwa.

OTTUMWA — About the only thing missing on Tuesday night was the CIML Metro conference championship trophies.

Those went home with Des Moines Roosevelt, preventing the Ottumwa boys and girls track and field teams from one more huge celebration at Schafer Stadium.

Throughout the CIML Metro Conference meet, the Bulldog athletes were making plenty of noise in a variety of events. Meghan Coulter finished her final conference meet tracking down runners three times in four wins after opening the night with a successful return to the relay that has brought her the most success in her four years at OHS, all part of a perfect 4-4 night on the track for the former state champion leading the Ottumwa girls to a runner-up finish to the Roughriders.

"We are a very young team and we had a lot of girls step up for us," Coulter said. "It wasn't just me. There were a lot of underclassmen that stepped up and dropped a lot of time. Win or lose, this meet was incredible to see how hard all of these girls have worked and it's finally showing."

Roosevelt spoiled Ottumwa's bid for school history as the Bulldog boys were seeking to win three consecutive conference titles for the first time. Successful runs in both the 800 and 1,600 meters allowed the Roughriders to rally for a 14-point win over OHS, winning 174-160 over the Bulldogs in a back-and-forth battle for the boys track and field conference crown.

"I knew it was going to be very close, especially after we were disqualified in the opening (sprint medley relay) event," Ottumwa head boys track and field coach John Lawrence said. "If we could have won it or finished second in that race, it might have helped put us in position to win the conference title again.

"I was a little surprised to hear we did not come out on top. I knew it would be close, but it's not from a lack of effort."

Certainly not from Austin Fountain, who picked up two individual Metro titles in memorable fashion with Bulldog teammates pushing him to glory in each event. First came the high jump title that Fountain won by entering the Bob Warren OHS track hall-of-fame with a successful jump of 6-2 achieved on Fountain's third and final attempt, edging out teammate Jesse Vanderheiden's personal-best high jump of six-feet even.

"I've been looking forward to the high jump all week. Not only am I proud of myself, but I'm proud of what Jesse has accomplished. He's upped his personal best by four inches this season," Fountain said. "This team is a family for sure. If I didn't have all the encouragement and all the love from my teammates, it might have been a different story.

"When I started out during my freshman year, I didn't think I'd get the hall-of-fame. Coming into the year, I was feeling pretty good about the high jump. Clearing six feet in the second meet was big this season. I've just kept trying to improve from there."

Fountain has also been a quick study in the 400-meter hurdles, leading to the first head-to-head win over teammate Isaac Eaton. After being edged by Eaton in three straight head-to-head runs, Fountain finally crossed the finish line first posting a time of 55.18 seconds to Eaton's runner-up time of 55.29.

"I came out a lot faster and I've built up the strength now to keep up that speed," Fountain said. "He's just barely been beating me. He has a really good push at the end of his races. The way Isaac comes off that last hurdle and the way he pushes it to win is unbelievable."

Eaton immediately gave Fountain a congratulatory hug before falling to the Schafer Stadium turf to catch his breath and sink his teeth into an orange. Fountain certainly didn't go away empty-handed, winning the 110 hurdles in 15.74 seconds while anchoring the shuttle hurdle team to a conference title in 1:03.44.

"Austin's my brother in arms. I support him in everything," Eaton said of Fountain. "He'll be the one that takes over this event (400 hurdles) next year. I'm proud to pass the torch to him, but this season isn't over. We've got the state qualifying meet (next Thursday) and hopefully the state meet. I'm not done winning this race yet."

Both Eaton and Fountain were pushed by Vanderheiden, who finished second in the 110 hurdles in 16.13 while also earning a conference title as the lead-off runner in the shuttle hurdle relay. Both Ottumwa teams had plenty of 1-2 finishes during the conference meet with Jesus Jaime (151-1) being pushed to a win by Rion Slack (125-2) in the boys discus and Lina Newland (17-10) being pushed to victory by Mady Houk (16-10) in the girls long jump.

"It's a massive part of this program's success," Vanderheiden said. "If we didn't have teammates pushing each other every day and those connections that we have, no one would be getting better. It's one of the biggest things in track. If you don't have that support from your teammates, it makes the whole team feel different. People just do worse when their teammates are not rooting for them."

Coulter was showered with support from her OHS teammates after running down Roosevelt senior Liz Hahn to close out a winning 4x400 relay run for the Bulldog girls. Coulter also ran past Hahn's younger sister, Abi, in the closing leg of the distance medley relay and reached OHS Hall-of-Fame status in the 400-meter hurdles, storming past Roosevelt sophomore standout Arriana Johnson to crossing the finish line with a personal-best time of 1:09.35.

"I had no clue. I smiled at my mom when the race was over just because I knew I had won, but when they announced that time, my heart just about beat out of my chest," Coulter said. "I've been working really hard to beat 1:10. That's my goal and that's the time to make the hall-of-fame. To beat it in the conference meet is amazing."

For Coulter, the night started out coming somewhat full circle coming back to run in the race she made her conference meet debut in as a freshman four years earlier. Opening the 4x800 relay, the race she won her state championship in as a sophomore in 2019, Coulter put Ottumwa out in front before cheering on teammates Kara Lockwood, Yaleli Carapia and Isabelle Mellin.

Mellin, the younger sister of Coutler's former state championship-winning teammate Carollin Mellin, helped Coulter go out with three 4x800 wins in three conference meets tracking down Liz Hahn on the final lap to give Ottumwa the win by less than two seconds in 11:19.76.

"Watching Isabelle coming down the straightaway was one of the best parts of the night," Coulter said. "I was screaming. Everyone was screaming. I saw that girl (Hahn) slowing down and I knew if Isabelle dug deep, she could get her.

It's really good helping these younger athletes experience this moment. When you experience something like this as an underclassman, it motivates you to push even harder after those seniors are gone."