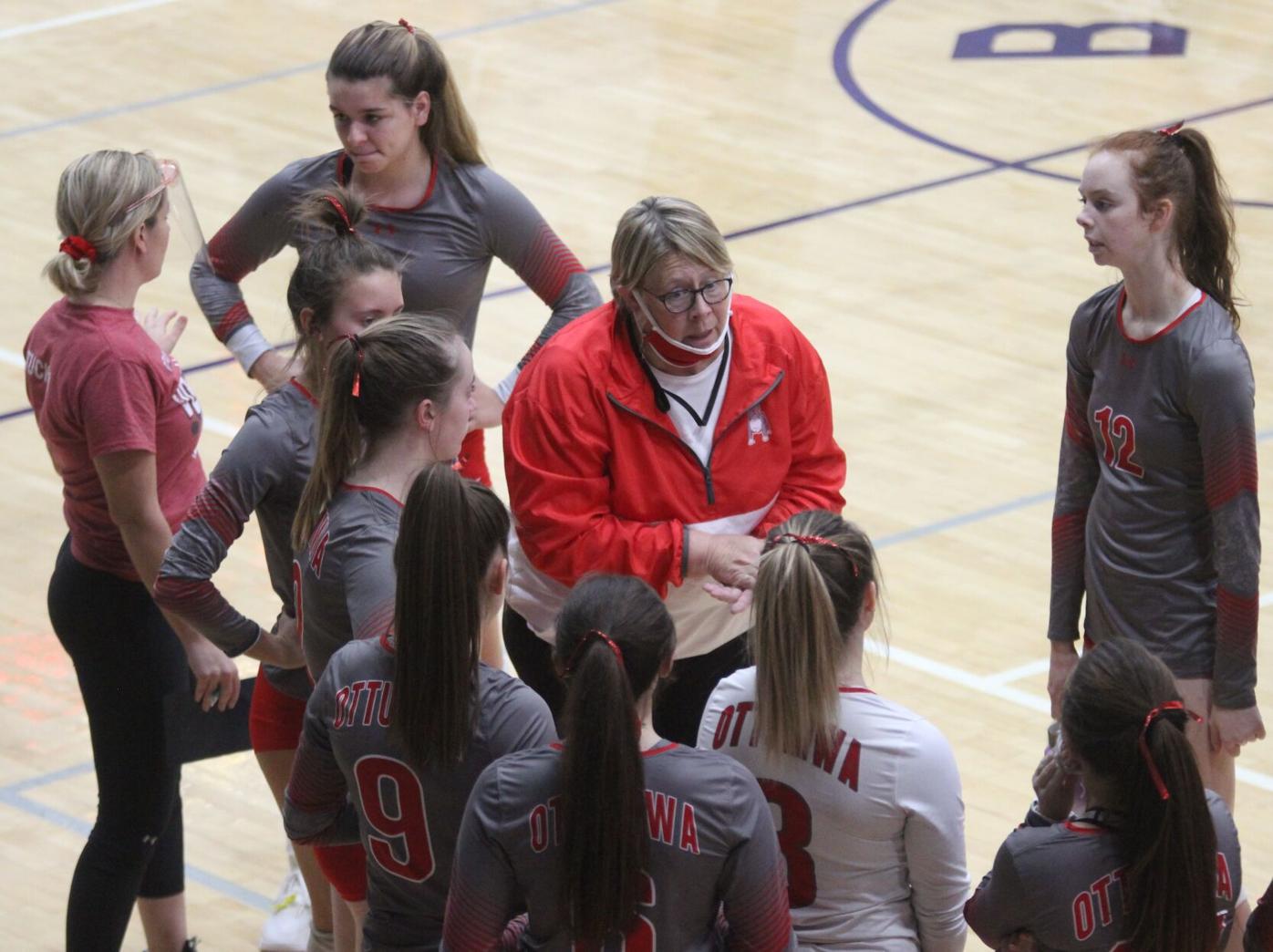 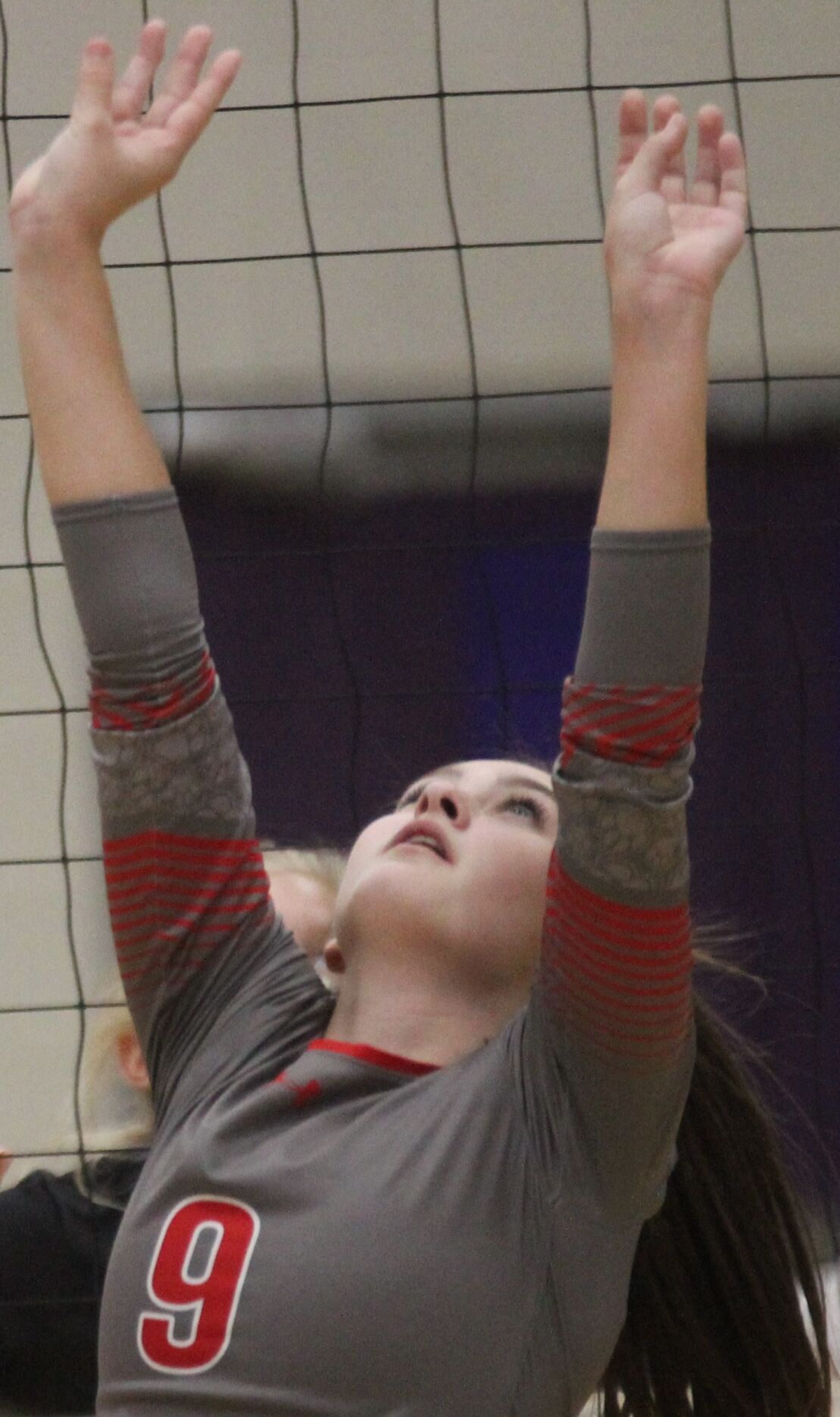 Ottumwa senior setter Emma Weilbrenner (9) looks up at the volleyball during action on Thursday night against the Burlington Grayhounds at Carl Johanssen Gymnasium in Burlington.

Ottumwa senior setter Emma Weilbrenner (9) looks up at the volleyball during action on Thursday night against the Burlington Grayhounds at Carl Johanssen Gymnasium in Burlington.

BURLINGTON – It was considering a signature win for the Ottumwa High School volleyball team earlier this season when the Bulldogs beat Southeast Polk in four games at Evans Middle School Gymnasium.

The Bulldogs have seven days to find the team that achieve that same success before their special season comes to a sudden end.

Ruth Thomas reminded her players of that fact on Thursday inside Carl Johanssen Gymnasium, where the Bulldogs dropped a tough four-set battle with the Burlington Grayhounds in a night of volleyball put together by both schools to make up for lost matches for both teams due to the ongoing COVID-19 pandemic. Burlington scored 12 of the final 16 points in the pivotal third set and prevented Ottumwa's top senior hitter from striking on pivotal points late in the fourth game to clinch a 26-24, 22-25, 25-20, 25-22 win.

"We just couldn't take our control and keep it," Thomas said. "We worked so hard to get that side out or that one point, maybe even a second or third point, but it was just like we couldn't seem to do it again to take control of a set. There were things like the ball falling in between two people that should not be happening, especially when the ball wasn't even very hard hit. It's just mental errors. I don't know if it's a lapse for us before we go into the final push (of the season). I just don't know if I can quite identify what it is."

Chloe Schneckloth, one of Ottumwa's nine seniors looking to finish out a third consecutive winning season by leading the Bulldog volleyball program on the deepest postseason run in over a decade, feels the turnaround will have to start from within. Schneckloth tried to help rally Ottumwa in the final set, teaming up with Emma Weilbrenner on a block that tied the fourth set at 22-22.

Anne Guest's bid for a go-ahead kill, however, drifted long as the pass to the senior all-state attacker was not quite on the mark. Ottumwa scrambled to cleanly receive the next serve trailing 23-22, leading Guest to attempt a long kill from near the back row that was easily blocked at the net giving the Grayhounds two match points with an ace serve officially clinching Burlington's 17th win and Ottumwa's 11th loss of the season.

"It was more about us just not being connected as a team," Schneckloth said. "The things that usually gets us high and gets us going, pumps us up just did not work. They read us, they knew what we were going to do and they knew how we were going to play our game in our big moments."

Ottumwa's biggest moment of the match came early in the second set after an overturn on a critical point late in the first set turned a long hit by Burlington at 24-24 into a partial block by the Bulldogs, leading to a match point for the Grayhounds and a first-set win clinched when Ashley Jones swung a ball into the net. Jones came back with consecutive kills during a 6-0 run to open the second set as Ottumwa led wire-to-wire, tying up the match on a clinching kill by Guest at 24-22.

Guest would led Ottumwa at the net with 17 kills, continuing her climb towards 800 career kills with 730 heading this weekend's Johnston Invitational. Jones matches Ally Paris with eight kills, but did so while also committing eight hitting errors on 25 attempts.

"It was definitely disappointing. We could have played a lot better," Jones said. "I think it will help if we can all talk to each other and move forward from here. We played well. We just have to put it all together."

The third set proved to be a struggle as the two teams continued to trade point for point with 11 ties being shared over the first 26 points. Neither team refused to give an inch with Ottumwa twice grabbing two-point leads only to see Burlington immediately answer by regaining slim leads of their own.

Finally, trailing 13-11, the Grayhounds scored six unanswered points to take the lead for good. Jones was stopped on her bid for a potential game-tying kill by Kayla Angle and Carley McGinity before the Grayhound teammates joined Ayla Cannon in scoring on kills while Ottumwa had consecutive hitting errors, allowing Burlington to open a 21-16 lead.

"If you're tied in a game, you just keep thinking you need to go back and forth until you catch that run," Schneckloth said. "They just happened to catch that run and we just couldn't stop them."

Burlington not only put away the third set, but led most of the fourth set opening a 19-13 edge at one point. Ottumwa's late run, sparked by Schneckloth's defense, ultimately was not enough to prevent the Bulldogs from losing for the seventh time in the last 10 matches.

"I would hate for them to finish off with this type of memory that we were close, but it wasn't enough," Thomas said. "I want them to feel that sense of accomplishment right at the end of this season going into another sport or going into the rest of their lives. That confidence can build in other opportunities. You want those moments for them. It's difficult to define what it is that we need to do to get back there."