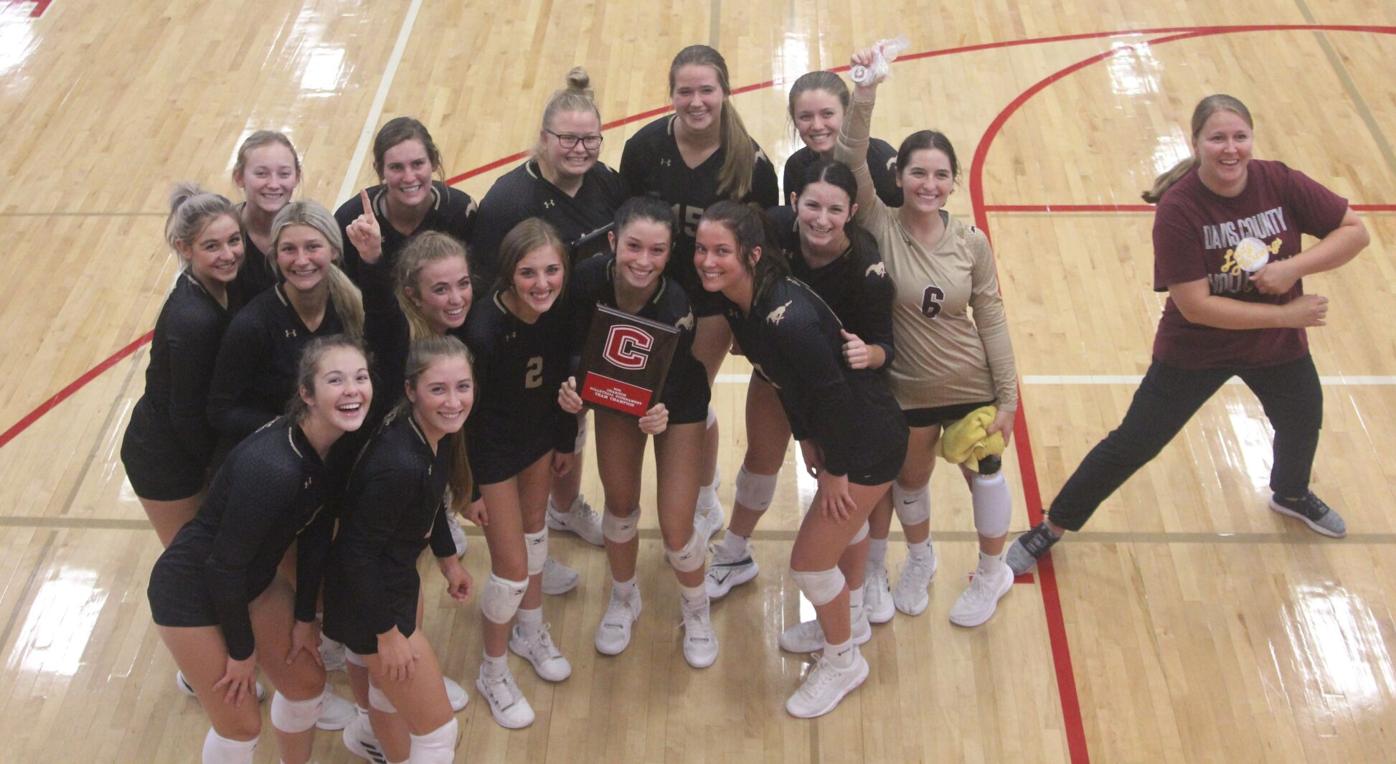 Members of the Davis County High School volleyball team celebrated on the floor at the Charger Dome on Saturday after clinching the Chariton Tournament title with a sweep in the championship match against South Central Conference rival Albia. 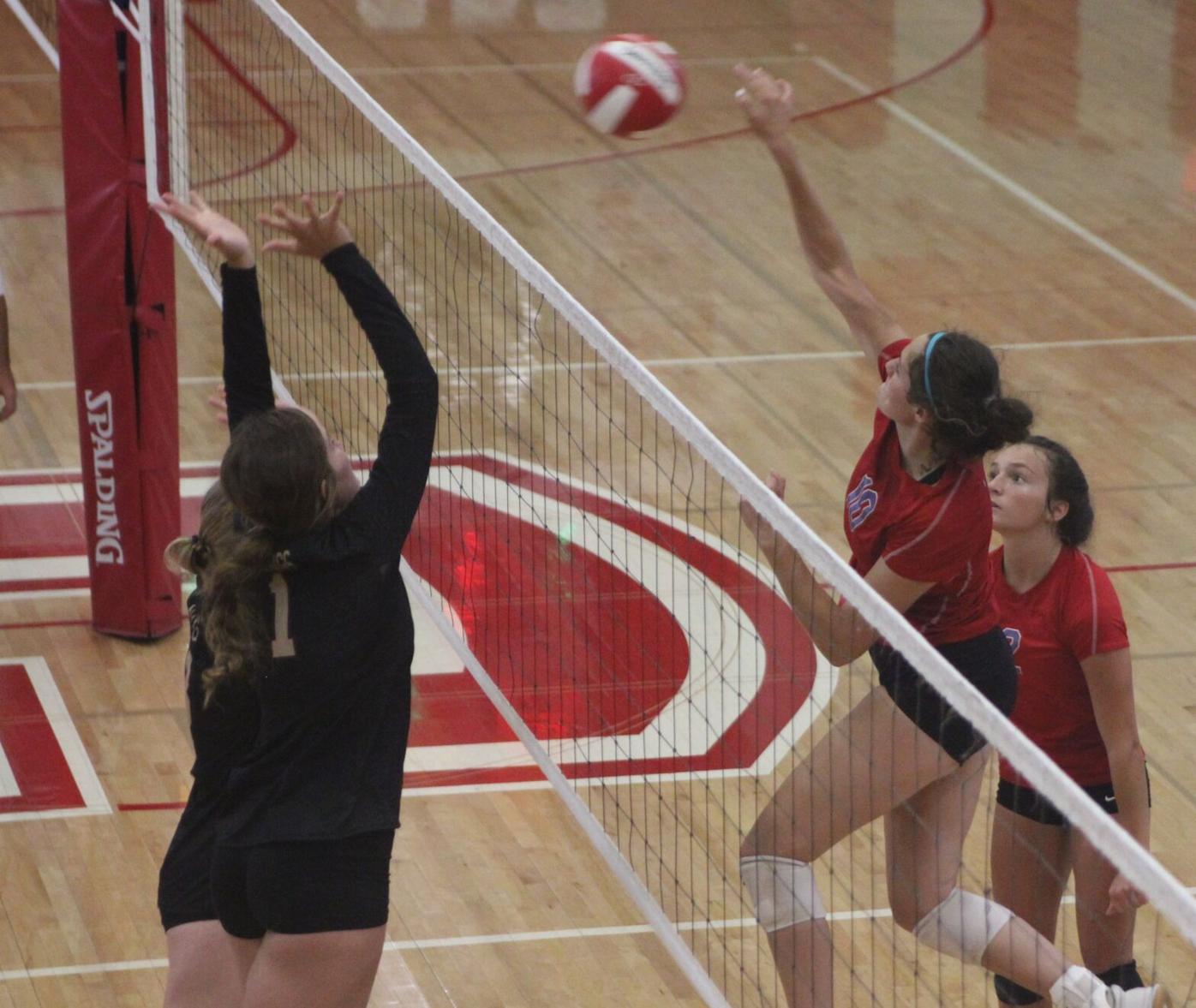 Addison Halstead goes up for a kill while being defended by Davis County as Albia teammate Emma Wenger watches on Saturday during the championship match of the Chariton Volleyball Tournament.

Members of the Davis County High School volleyball team celebrated on the floor at the Charger Dome on Saturday after clinching the Chariton Tournament title with a sweep in the championship match against South Central Conference rival Albia.

Addison Halstead goes up for a kill while being defended by Davis County as Albia teammate Emma Wenger watches on Saturday during the championship match of the Chariton Volleyball Tournament.

CHARITON – The saying in sports is that it's hard to beat a team three times.

It's certainly not a rule, however. The Davis County volleyball team has proven that in the last four days alone.

The Mustangs followed up a perfect run to the Chariton Tournament title on Saturday that included a pair of wins over South Central Conference rival Albia with a three-game sweep on Tuesday that was even more one-sided than either of Saturday's tournament matches. Davis County followed 21-15, 21-16 and 25-21, 25-18 wins over the Lady Dees at Chariton with a 25-10, 25-19, 25-18 Homecoming week victory, improving to 3-0 in conference play while extending their current winning streak to 12 straight matches.

"We were actually excited that we got to play Albia in the championship match (on Saturday)," Davis County senior Briley Lough said. "It's just good competition. The more we play them, the more familiar we get with them. We know what they do and what they don't do."

What the Mustangs have done well is win the battle at the net, using their experience to their advantage. On Saturday, Davis County committed just six hitting errors in 38 attacks in the opening pool-play match against Albia with four different players combining to win 17 points on kills while limiting the Lady Dees to 13 kills on 36-47 attacking, forcing a .043 hitting efficiency.

While Albia stepped up their attack in the championship rematch later on Saturday with Davis County, going 55-67 with 23 kills, the Mustangs were almost twice as efficient at the net going 52-60 with 23 kills. Stephyn Wilfawn stepped up her production at the net, connecting on 11 kills in the second match with the Lady Dees after being limited to four in the opening Saturday morning match.

The Mustangs certainly didn't slow down against Albia on Tuesday, jumping out to an early double-digit lead in the very first game of the third match between the teams in less than a week. It was more of the same from Saturday as Davis County got ahead in each game and prevented Albia from making a real threat at stealing at least one game from the red-hot Mustangs.

"I think it's because of the great crowd we had on hand and the great momentum we've built up coming into this match," Davis County junior Sophia Young said. "We knew we wanted to get this done and get this win. I thought it would be closer just comparing the play in a weekend tournament to a regular match on a weeknight, but as long as we play our game, there's nothing stopping us."

In between the three losses to Davis County, Albia was able to battle its way to three straight wins over the weekend at the Chariton Tournament. After matching the Mustangs by sweeping North Mahaska and Wayne in pool play, the Lady Dees avenged a three-set loss in the finale of the team's season-opening home tournament by rallying past No. 15 (1A) Southeast Warren 22-25, 25-23 and 15-13 in the tournament semifinals.

Emma Wenger led Albia with 11 digs and 19 assists for the Lady Dees in the win over the Warhawks. Tanae Thiravong collected a team-leading seven kills while matching Addison Halstead with a pair of blocks in the 10th win of the season for the Lady Dees. Halstead could only watch Albia's three-set loss to Southeast Warren back in late August after injuring her ankle in an earlier match on opening night against Montezuma.

"We talked about getting the chance to beat Southeast Warren after losing that match earlier this season. It felt so good to actually contribute to the win instead of having to watch the match from the sidelines," Halstead said. "Morgan Teno went in for me in that match and did great. It was kind of frustrating to watch instead of play, but I'm clumsy, so that stuff happens."

Albia (10-4, 2-1 SCC) and Davis County (15-4, 3-0 SCC) may see each other again this weekend. Both teams will be part of the field competing for the title at the Ottumwa Invitational, which gets underway with pool play matches at 8 a.m.

"We know we don't want to overlook anyone," Davis County head volleyball coach Brooke Mason said. "We've come out with the right mindset. We have some good leaders that are going to make sure everyone is where they should be on the court. We'll take something away from every match and we'll head into Saturday with a good mindset to take care of business."

If that means a fourth meeting in eight days with the Lady Dees, the Mustangs are ready to embrace that opportunity.

The feeling is mutual, according to Halstead.

"I like playing them (Davis County). They're good competition and they're all nice," Halstead said. "We actually talk to each from across the net. Sophia, Chloe (Fetcho) and Kallie (Greiner) were, I guess, showing us some of their footwork before the match. If I didn't know them, I'd be frightened of that.

"Fortunately, I do know them. They were just being weird."