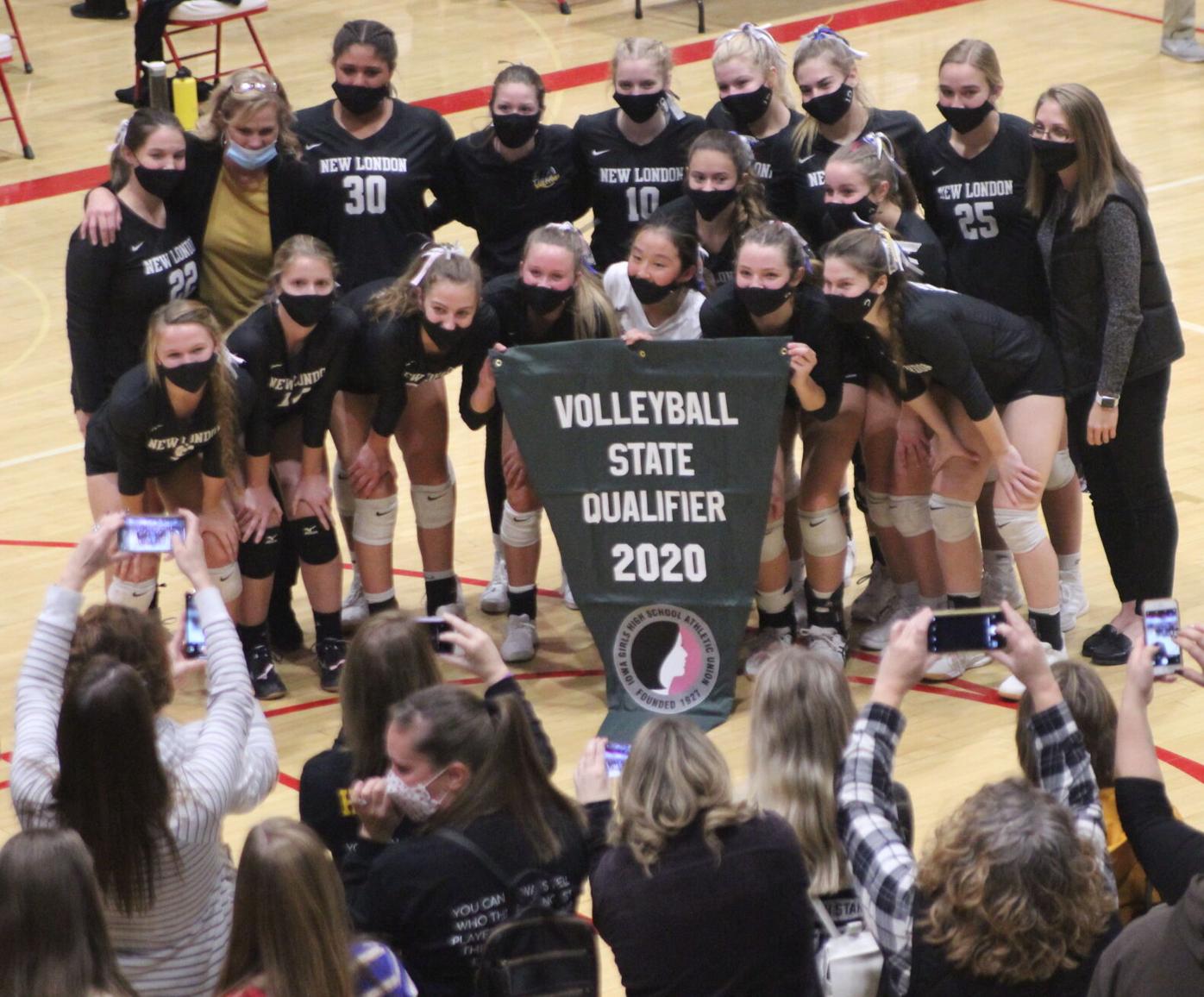 The New London High School volleyball team celebrates as fans of the Tigers take pictures after the Tigers earned the Class 1A, Region 5 championship on Wednesday night at Evans Middle School Gymnasium in Ottumwa. 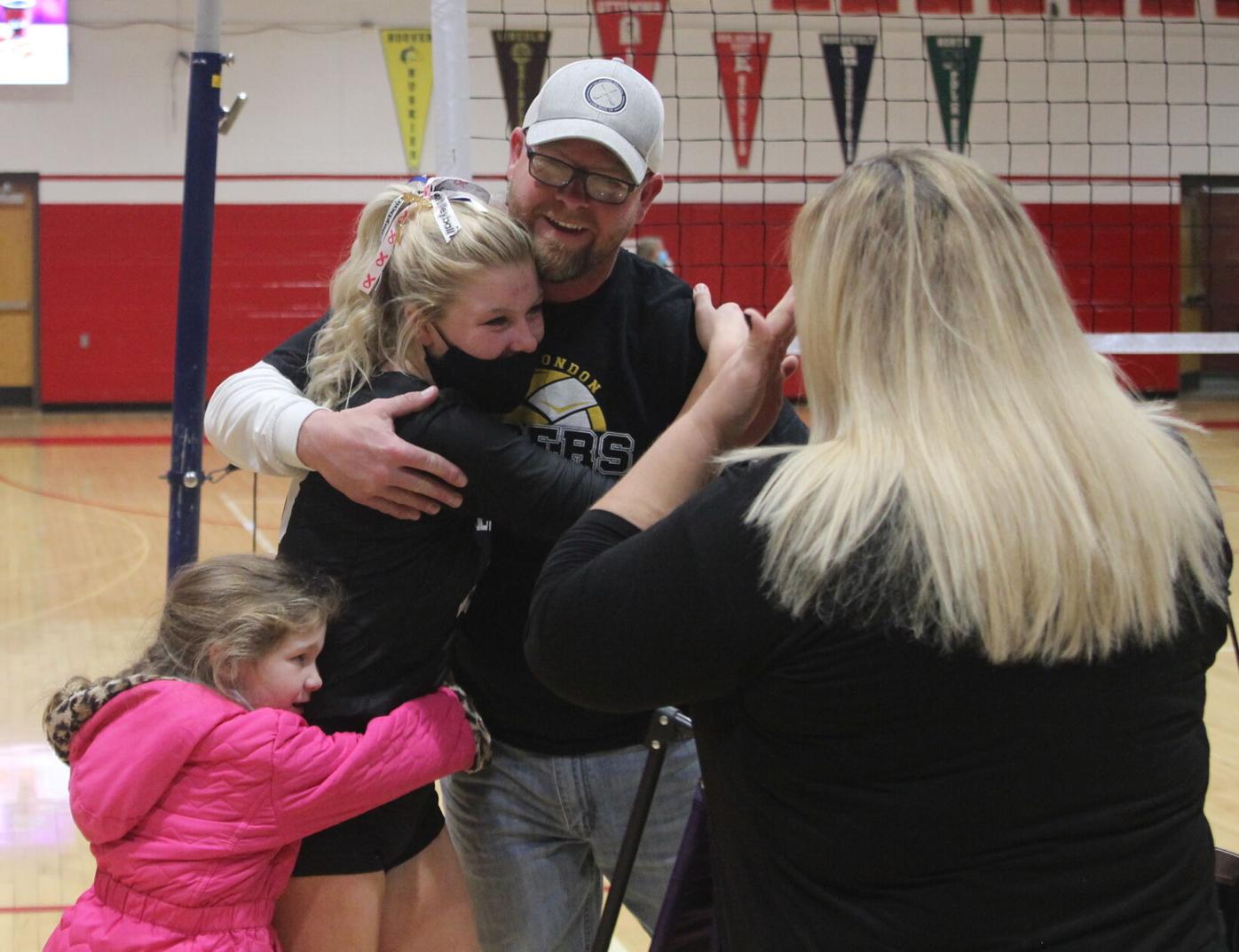 New London freshman Sophie Malott shares a hug with family members on Wednesday night after clinching a 25-18, 25-22, 26-24 win over Southeast Warren in the Class 1A, Region 5 high school volleyball championship match with a kill at Evans Middle School Gymnasium in Ottumwa. 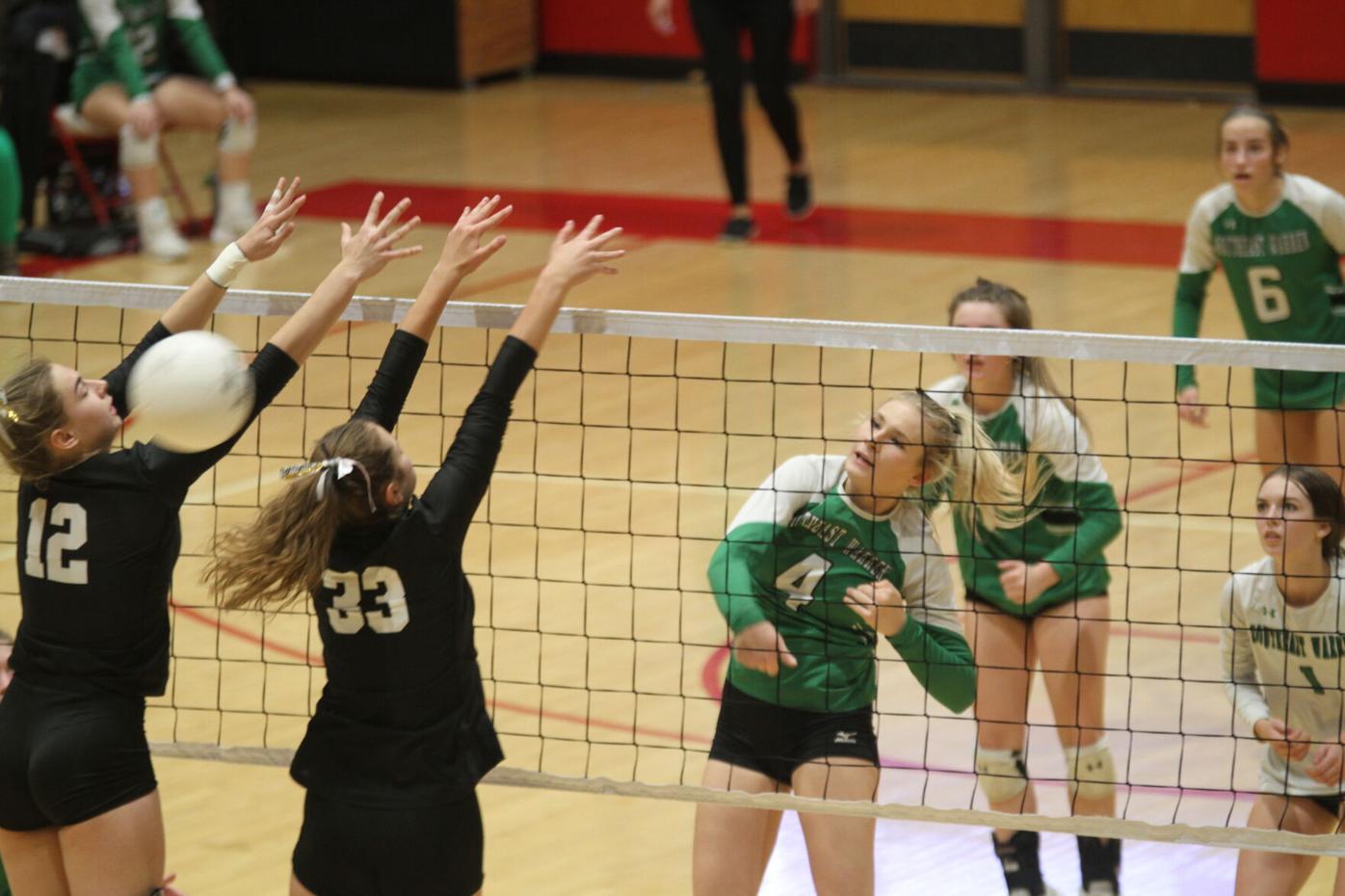 The New London High School volleyball team celebrates as fans of the Tigers take pictures after the Tigers earned the Class 1A, Region 5 championship on Wednesday night at Evans Middle School Gymnasium in Ottumwa.

New London freshman Sophie Malott shares a hug with family members on Wednesday night after clinching a 25-18, 25-22, 26-24 win over Southeast Warren in the Class 1A, Region 5 high school volleyball championship match with a kill at Evans Middle School Gymnasium in Ottumwa.

OTTUMWA — Hours before it began, Emma Nye had a prediction how Wednesday night's Class 1A, Region 5 volleyball championship match would end.

"Towards the end of school, we were talking about the match and Emma was calling it," New London freshman Sophie Malott said. "She told me that I was going to score the final point."

Four hours later, the 11th-ranked Tiger volleyball team found themselves inside Evans Middle School Gymnasium just one point away from clinching the program's first trip to state since 2014. Sure enough, the ball found its way to Malott.

The freshman made her teammate's prediction come true, dropping home the final point on Southeast Warren's side of the net to clinch a 25-19, 25-22, 26-24 win over the sixth-ranked Warhawks. Coming off back-to-back regional wins in Ottumwa, New London (22-7) will head to Cedar Rapids next Tuesday night to face Gehlan Catholic of LeMars at Brighthouse Energy Arena in the Class 1A state volleyball tournament quarterfinals at approximately 8 p.m.

"She just got her spot not that long ago," Nye said of Malott said. "She doesn't have as many kills as our other outside hitters, plus she's a freshman. To me, that all added up to her definitely getting the match point."

Had Malott scored one more kill in the match, she would have joined Tiger teammates Sofie Reighard, Natalie Burden, Keaura Williams and Marah Hartick in sharing the team lead with seven kills in the match. That balanced attack helped the Tigers finish with 37 kills, nine more than the previously-unbeaten Warhawks who could not hold 19-13 leads in either of the final two games.

"To be able to make that type of comeback takes a lot of focus and a lot of determination," New London head volleyball coach Maureen Heath said. "It takes grit. I think the competition we faced throughout the season helped get us ready for this match.

"We're thankful for the opportunity. Our team worked hard for it. We had some great plays, we had a great game plan and our girls executed it. They played with a lot of heart. I'm just so proud of them."

Southeast Warren entered Evans Gym on a roll. The Warhawks had not only won all 25 matches this year, but had only dropped two of 65 games played during the season.

"The record isn't something we focus on. We just focus on each ball and work on getting better every day," Southeast Warren head volleyball coach Jodi Clendenen said. "The wins just happened to come along with that work this year. It was really exciting and fun, but having a perfect season was never our focus."

The battle-tested Tigers showed the skill and will that allowed them to claim a share of the Southeast Iowa Superconference's south division title overcoming challenges from fellow 1A state qualifier Burlington-Notre Dame, 1A regional finalist WACO and perennial state championship contender Holy Trinity. The Tigers scored eight of the first 11 points in the match and never looked back, gradually building a 23-13 lead before finally putting away the Warhawks (25-1) on a block and a kill by junior Paris Wilka.

"Those teams we faced throughout the season, both in and out of conference, made us stronger," Heath said. "We'll take those seven losses. We'll play that competition to get us ready for this."

After suffering just their third lost game of the season, Southeast Warren seemed poised to even the regional final at 1-1. Makayla Ruble secured five of six kills during the game for the Warhawks, helping to establish an early 9-4 lead.

That cushion was still in place for Southeast Warren after a swing by Wilka went into the net, giving the Warhawks their first 19-13 lead of the match. The Tigers responded by erasing the deficit with six straight points with Hartrick getting into the mix, scoring a pair of kills as New London caught and eventually passed Southeast Warren on a block and kill by Williams.

Williams added a pivotal kill at 23-22, giving New London a sudden game point. Aliyah Christensen then dropped in the ensuing serve to put the Tigers up 2-0 in the match.

"It just felt like any other match for us," Malott said. "It didn't feel like a bigger match. It didn't feel like the match to go to state. We've played in some big matches this year. When we played West Burlington earlier this year, that was a big one. It was more back-and-forth. It felt a lot like how this match played out."

Southeast Warren's last chance to keep a perfect season alive faded after again building a 19-13 lead in the third game. The Warhawks held off New London deeper into the game, taking a 23-21 lead on a kill by Ruble, before Malott would come on to set up the clinching kill with a pair of winners that put New London up 24-23.

Josie Hartman kept Southeast Warren alive for one more point, scoring her match-leading ninth kill to erase New London's first match point. After Alivia Ruble's hit at 24-24 drifted long, the Tigers put the match away finding their freshman on the left side of the net for the point that punched a ticket to Cedar Rapids for the SEISC south co-champs.