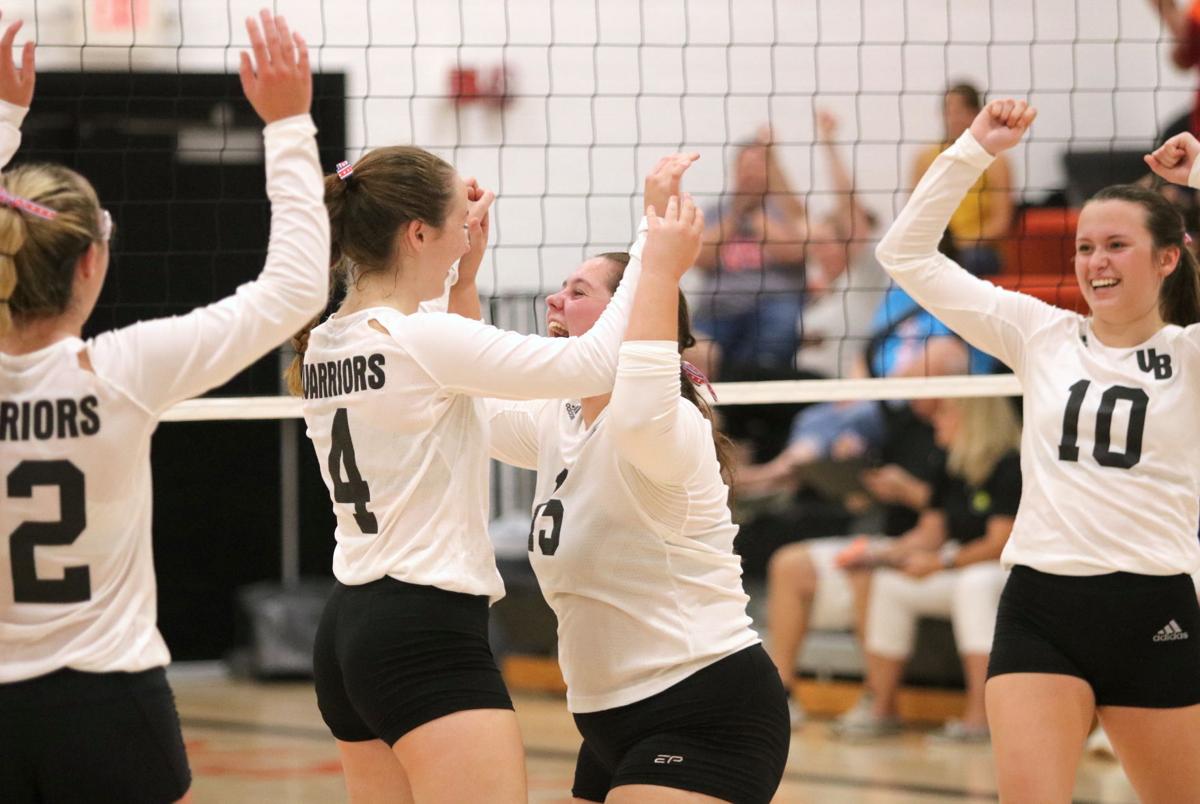 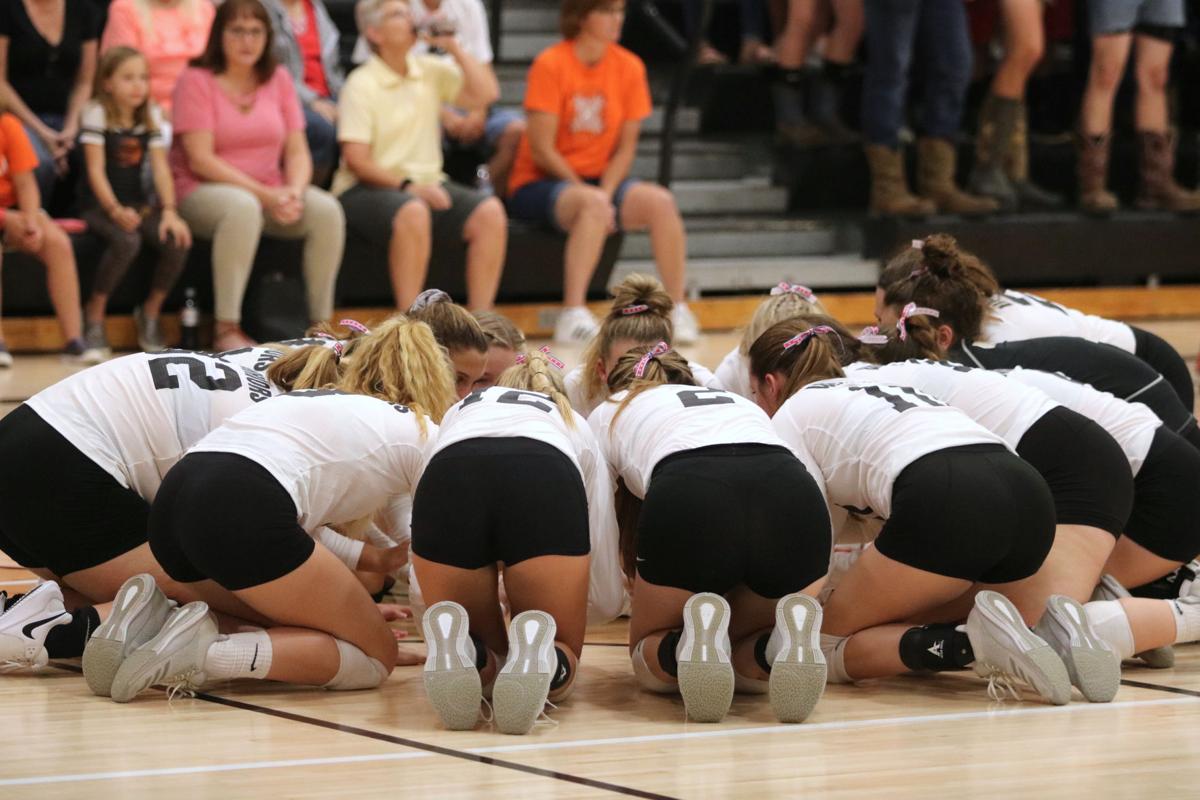 Van Buren High School volleyball players kneel in a circle prior to the start of Tuesday's match against Holy Trinity in Keosauqua. 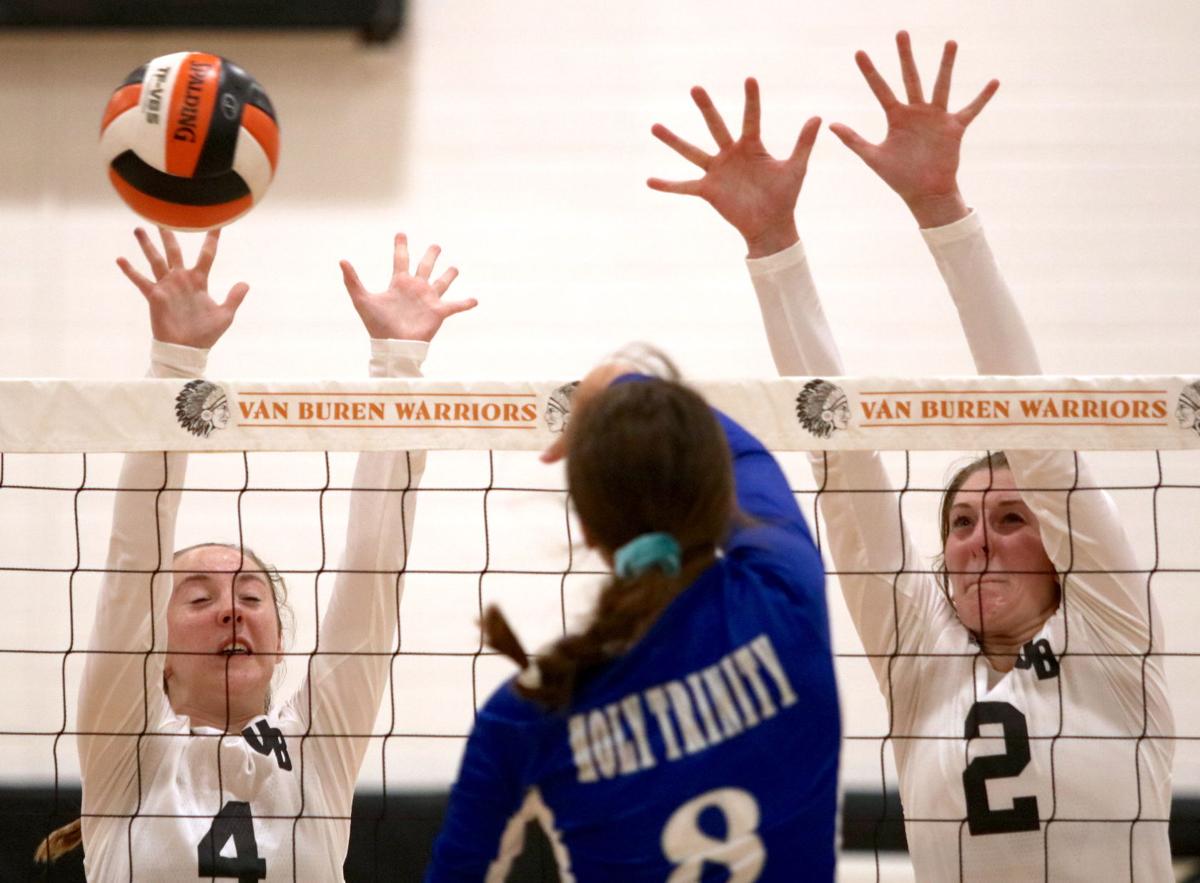 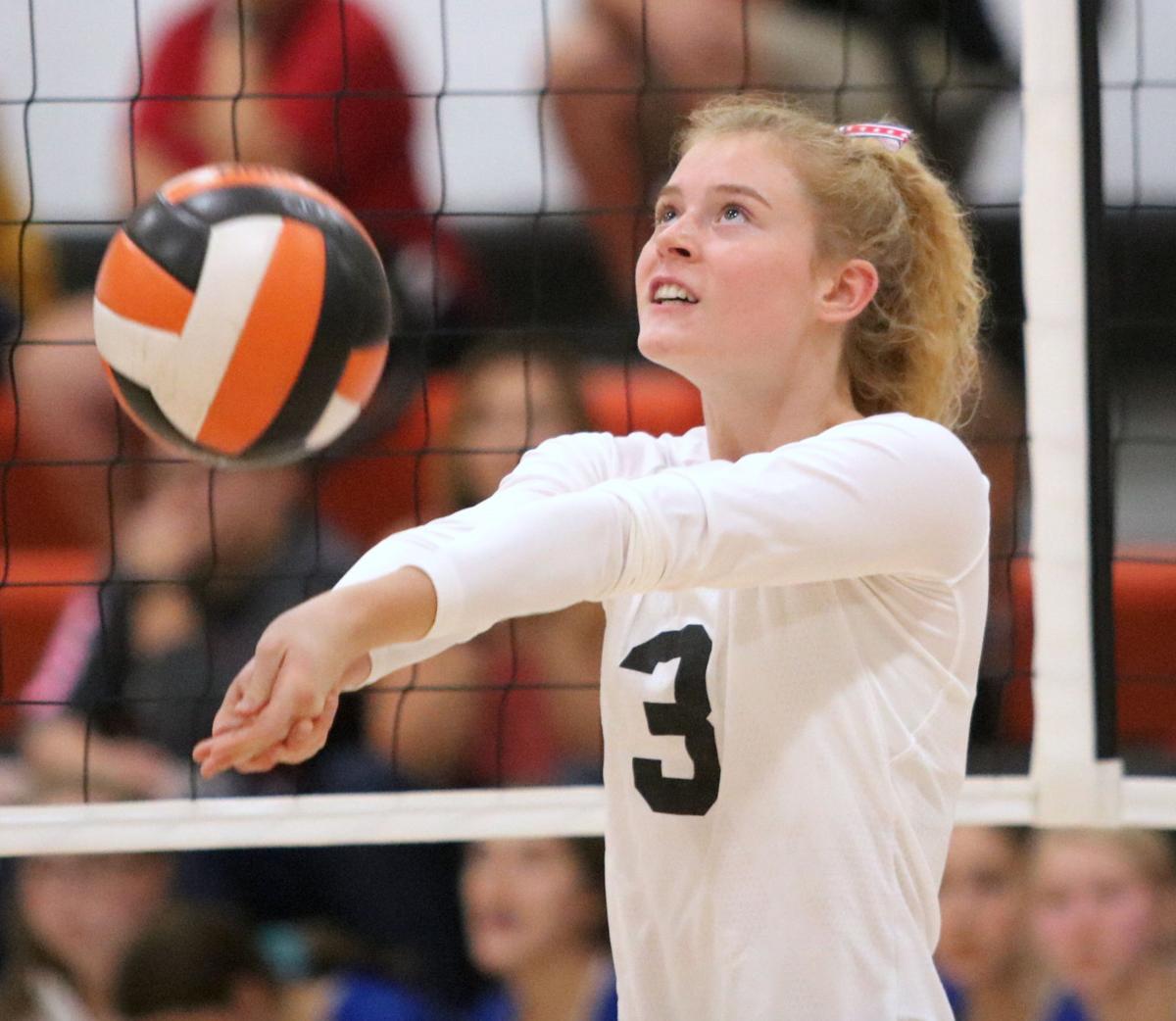 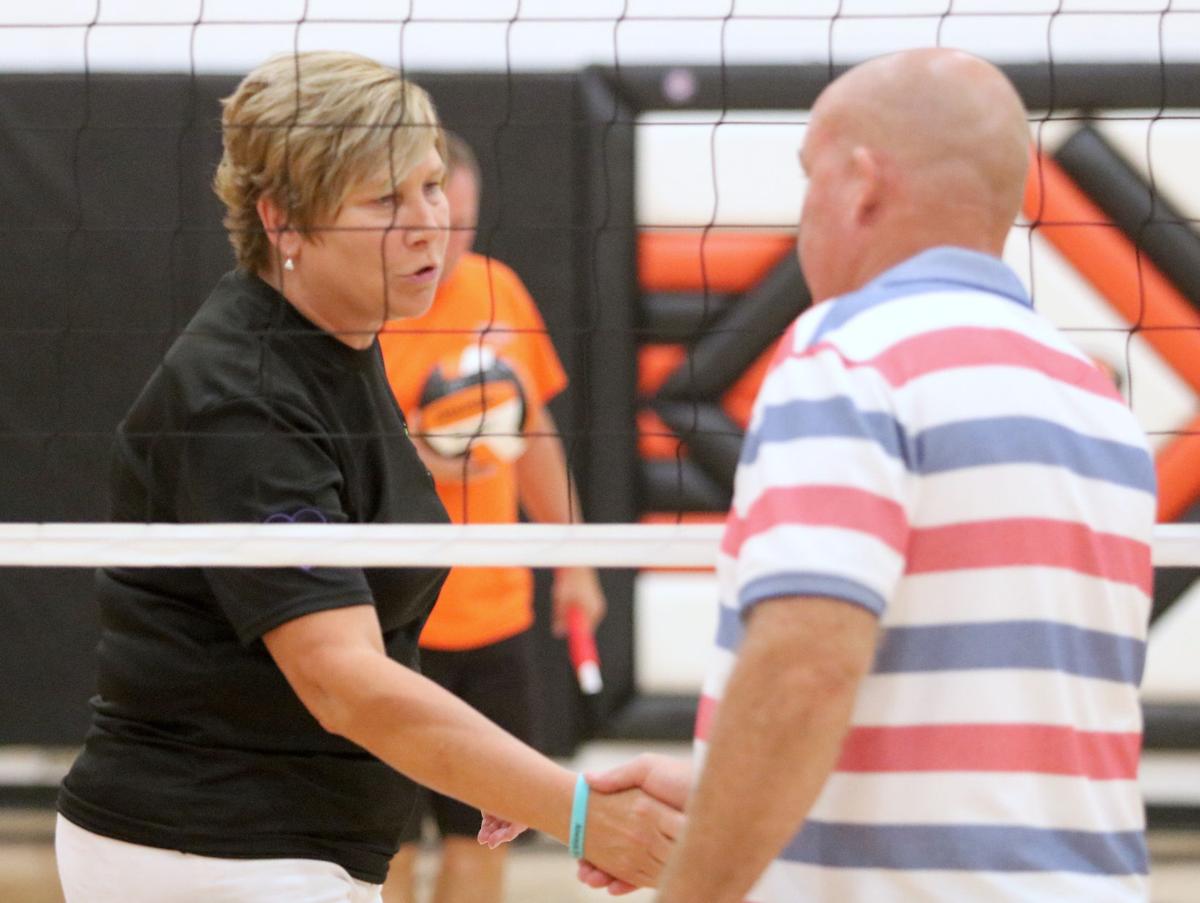 Van Buren High School volleyball players kneel in a circle prior to the start of Tuesday's match against Holy Trinity in Keosauqua.

KEOSAUQUA — The drought had been so long that it predated Matt Zeitler’s career as Van Buren High School volleyball coach.

After all these years, the Warriors can take the program’s biggest hurdle off the bucket list.

Fourth-ranked (Class 2A) Van Buren overcame big deficits in the first two games, then responded with domination in the third game of a 25-23, 25-22, 25-10 SEI Superconference South Division sweep of ninth-ranked (Class 1A) Holy Trinity Thursday for arguably the program’s biggest win.

The Warriors (12-2, 4-0 division) didn’t hold back on the meaning of the win. They’ve arrived as a program, but there are more goals to accomplish.

“I think it really shows we can play with anyone,” senior outside hitter Selena Sayre said. “It takes a lot just to get to where are are right now. I think with so many players who are close on and off the floor, that chemistry helps us.”

The Warriors had not taken a game from the Crusaders, a Class 1A state power for more than a decade, since 2008. Zeitler was 0-12 in matches against Holy Trinity, and he’d draw lines on a white board in the locker room to demonstrate how far the program had progressed.

That line is a little longer now.

“The longer these girls go in games the better they get,” he said. “I felt pretty good having a two-set lead. The girls just don’t quit, and they play harder when they get down. They’re just slow starters.”

Indeed, Holy Trinity pulled away midway through the first game by playing strong defense and hit well-placed shots to uncovered parts of the court. The Crusaders dug out powerful hits, and eventually took a 18-12 lead.

Van Buren clawed back, tying the game at 23 on a kill by Taryn Scheuermann, then Scheuermann had a kill to win the game. Long serving runs by Sayre and Chloe Davidson helped the Warriors start their comeback.

“Sometimes the good hits you take don’t make it down, and then it’s the ones you don’t hit well that do,” Scheuermann said. “Volleyball is such a mental sport, but we always play better as sets go longer. We just kept playing.”

Fresh off a big opening win, the Warriors fell into a 6-0 deficit to start the second game. They trailed 17-10 as well before finding Scheuermann in the middle. The senior had a kill to tie the game at 19, another to tie at 20, and then Sayre finished strong, pounding the winner as Van Buren scored six of the last eight points.

Van Buren didn’t leave anything to chance in the third game. The Warriors took a 5-1 lead and needed just 20 points to take their first double-digit lead in winning going away.

“Our serving was really strong tonight,” Sayre said. “No matter who we have back there, whether it’s Logan (Schmitt), Grace (Davidson) or Chloe, they call can get it done.

“I think it helped that we started with the serve in the third game, rather than on the receive like in the second game,” she said.

“Beating a time like Holy Trinity means a ton to us,” Scheuermann said. “We have to come out better as team though. We had to start playing like we know how, and keep our heads up as well.”

Zeitler was more pleased with his players than anything. The Warriors have won almost every close game they’ve played this year, and this match was no different.

“We’ve had our ups and downs in the past,” he said. “But these kids have worked at it. It’s hard to win games when you’re down seven points, but these kids won’t quit.”

OTTUMWA [mdash] Jack Ervin Carder, 88 of Ottumwa, formerly of Batavia, died May 31, 2020. He was cremated and there will be no service at this time. On-line condolences may be made to the family at behnerfh.com.