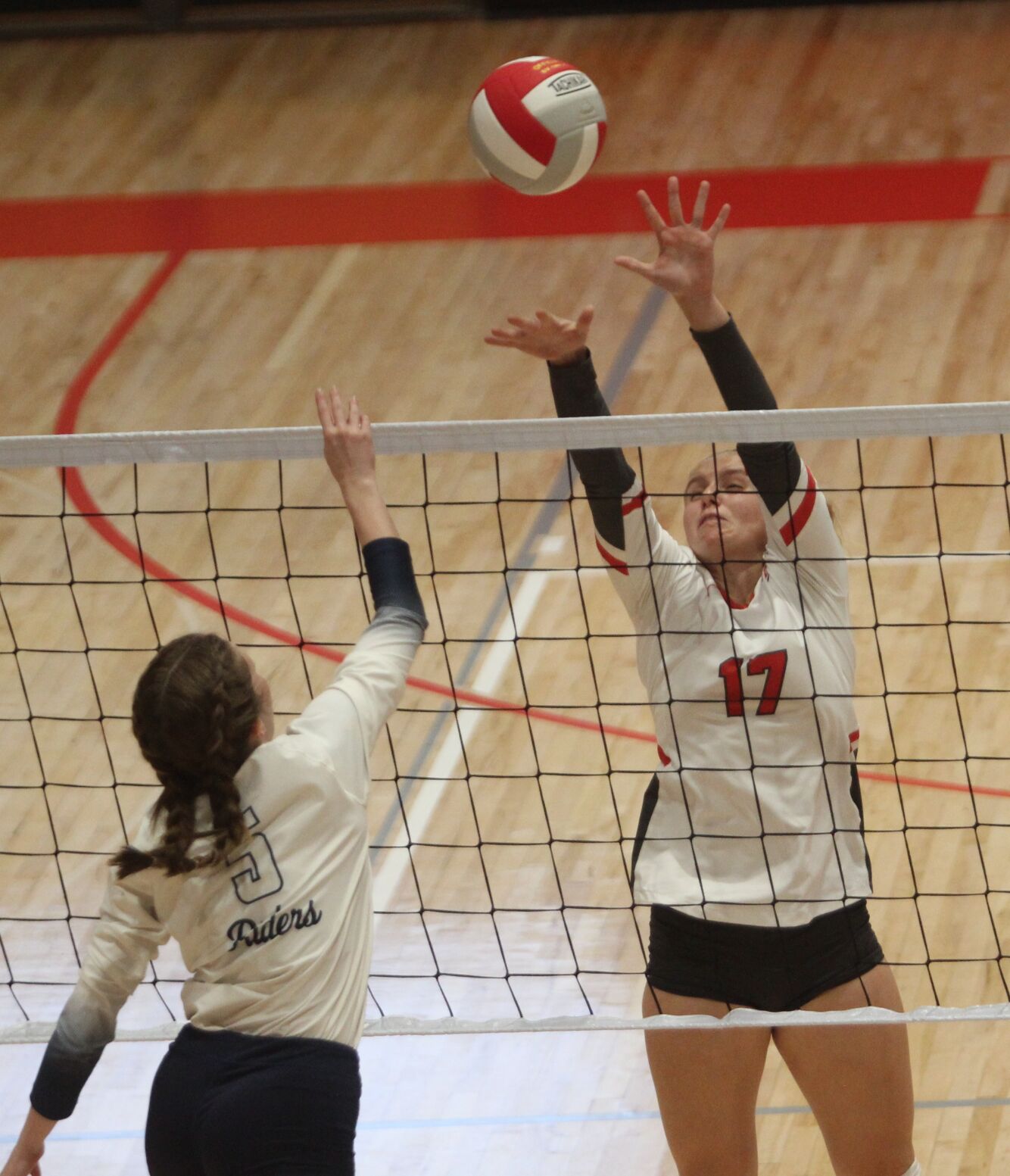 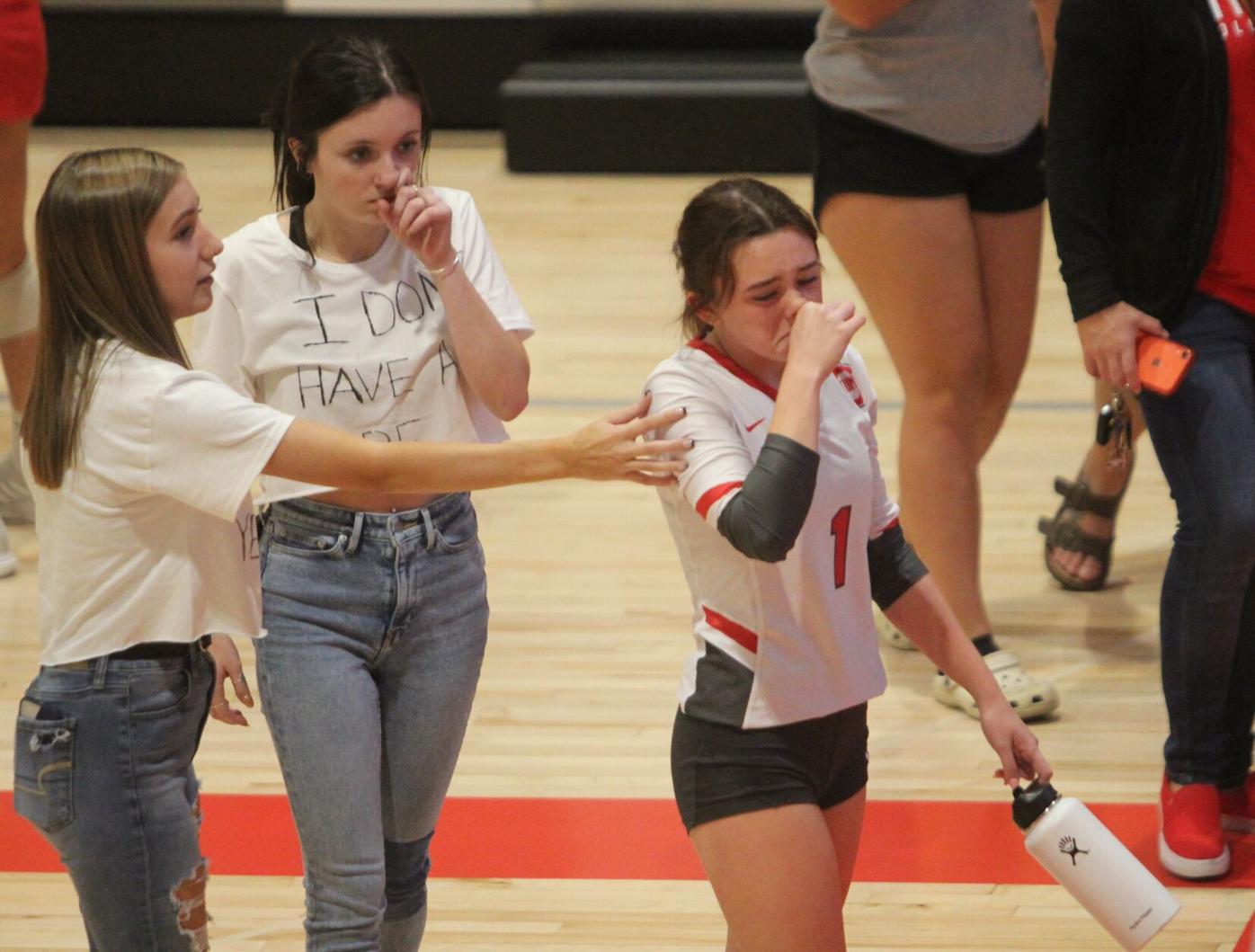 OTTUMWA – The dream was starting to become a reality for the Ottumwa High School volleyball squad.

Needing a win on Tuesday night to earn a share of the CIML Metro conference title, the Bulldogs had a one-game lead against Des Moines Roosevelt. Four straight points in the second set put Ottumwa up 11-9, leading to a timeout by the Roughriders with momentum clearly on the side of the young Bulldogs.

"It felt like everyone was working together well," OHS senior libero Kiley Heller said. "We were communicating well. No matter what the score is, I take it one point at a time. I didn't think about the possibility that we might be on the verge of winning a conference title."

That would be as close as Ottumwa would get, however, to realizing the conference championship dream on Tuesday. Roosevelt responded to a firery speech during a timeout by head coach Mark Steinbach, scoring 16 of the final 21 points in the second set to even the match before taking the final two games over the Bulldogs, clinching a perfect run to the outright CIML Metro title with a 16-25, 25-18, 25-20, 25-13 win at Evans Middle School Gymnasium.

"From that point on, we started making errors," Ottumwa head volleyball coach Patricia Mulholland said. "We started missing serves. We had free balls that we hit out of bounds. The girls know they can do this. They just needed to find a way to win a match like that."

Julia Stewart would come on down the stretch for the Roughriders, scoring on a match-high 17 kills while adding seven blocks at the net. Stewart looked shaky initially after the second-set timeout in which Steinbach verbally lit into this players, committing a net violation on the first point out of the timeout before swinging into the net, giving the Bulldogs a 13-9 lead.

"When we work together, once we find our flow, it's a good pace that we've got going," Stewart said. "It helped a lot. We knew we could win this. We knew we were going to make practice even harder on ourselves if we chose to be lazy. We chose to work hard and to win."

Roosevelt ultimately began to take control at the net as a team, recording eight of the 10 blocks in the third set and 11 of the 15 kills recorded between the teams in the fourth set. Ottumwa aided Roosevelt with 12 combined errors in the final two sets, helping the Roughriders maintain a lead throughout the entire third set before taking the lead for good in the fourth and final set after tiebreaking ace serve by Grace Hagge put the Roughriders up 5-4.

"The biggest thing for us is that we need to stay up even when we do get down," Heller said. "We need to keep our confidence up at a high level. We kind of stopped communicating as well. We were not as confident. We kind of played it safe with the ball. Instead of putting it smart places where they weren't, we kind of just handed them the points."

Brooklyn Beske led Ottumwa with 15 kills in the match. Rylea Hinebaugh not only led the Bulldogs in setting, but added a team-high four aces while Ella Allar paced the Bulldogs defensively at the net with seven blocks.

Roosevelt (11-19, 5-0 CIML Metro) and Ottumwa (9-21, 3-2 CIML Metro) may see each other again this weekend as both teams compete in the CIML Metro conference tournament in Des Moines on Saturday. The Bulldogs will also have one more match at home next Tuesday, opening Class 5A regional tournament play against Waukee at Evans Gymnasium.

"I'm so excited to have one more home match this year," Heller said. "Having our student body here is a big advantage. I feel like we're more energized here at home having everyone in town here to watch us. It helps us a lot."