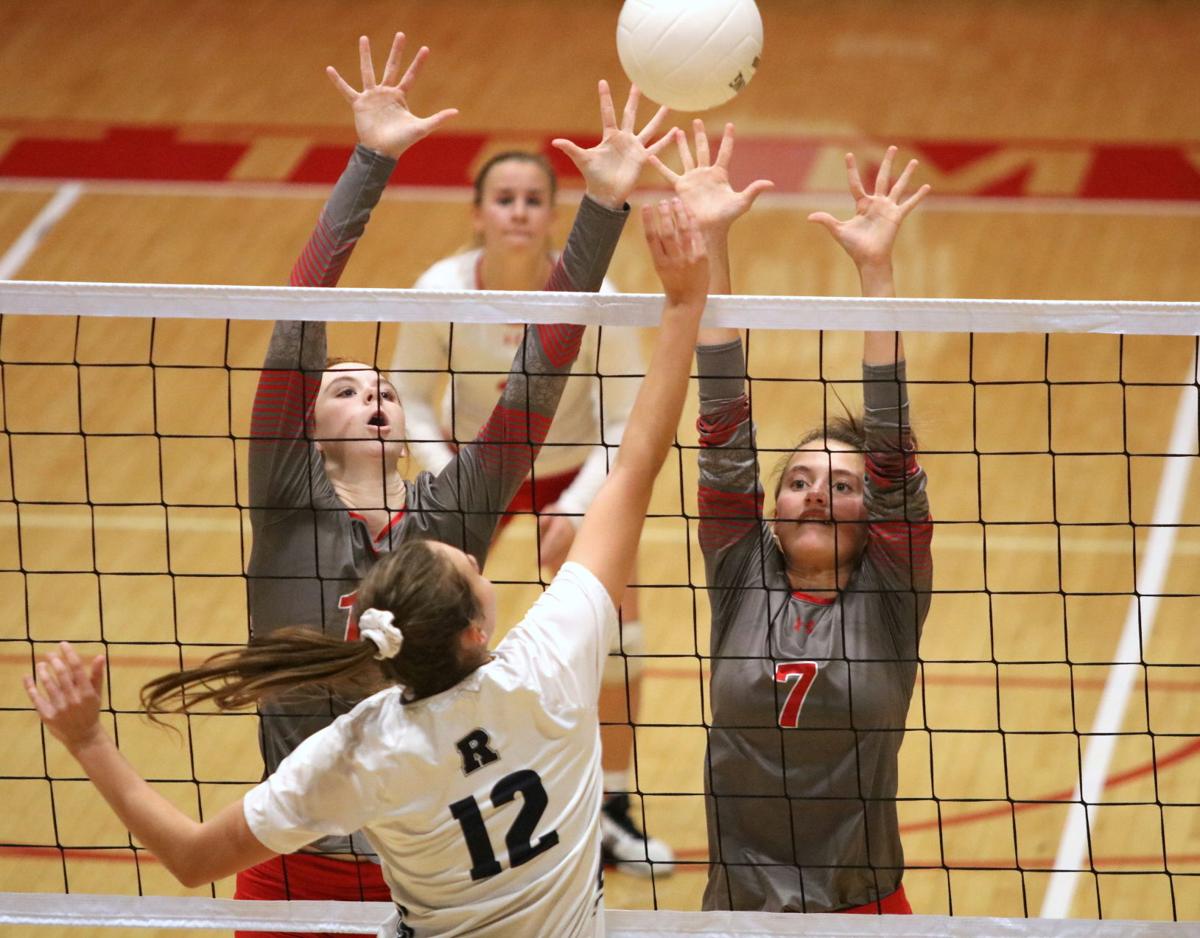 Ottumwa High School volleyball players Anne Guest (left) and Chloe Schneckloth get their hands up for a block on a hit from Des Moines Roosevelt’s Tabby Keith during Tuesday’s CIML Metro match at Evans Middle School in Ottumwa. 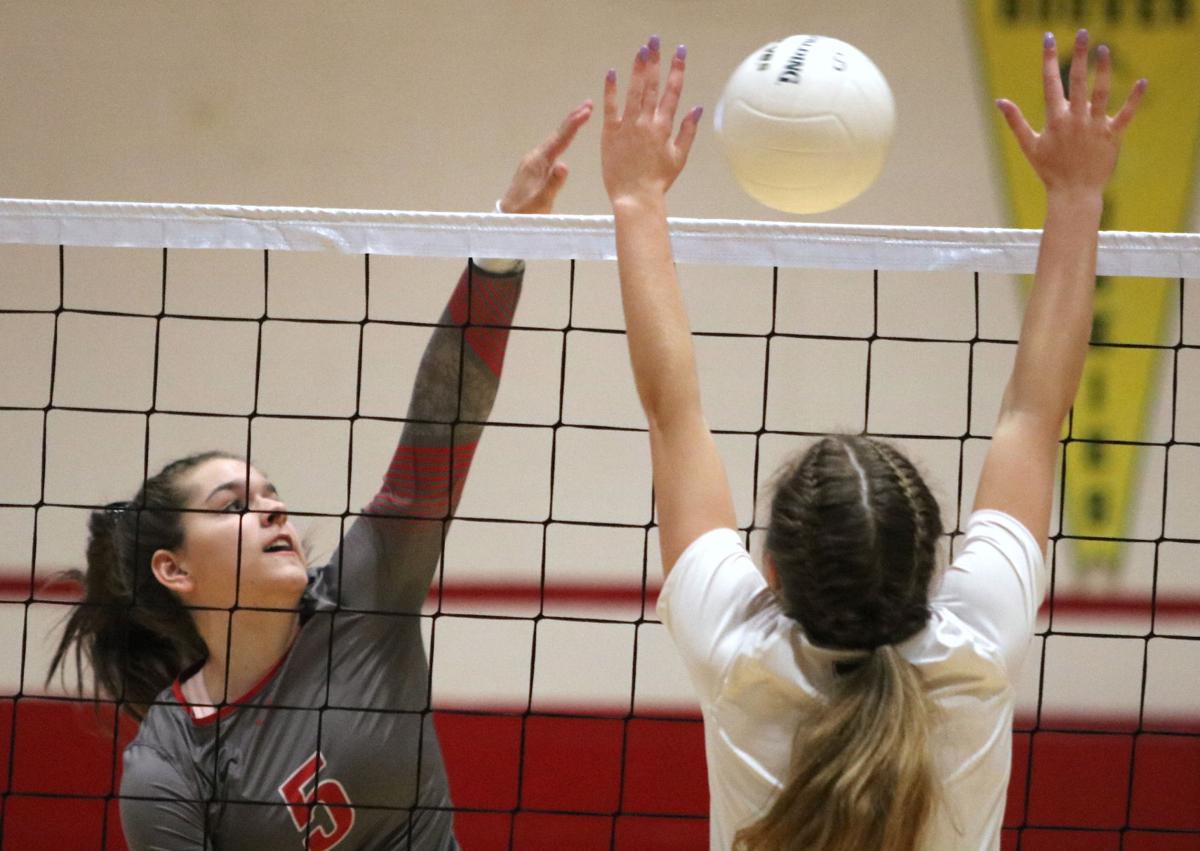 Ottumwa High School volleyball players Anne Guest (left) and Chloe Schneckloth get their hands up for a block on a hit from Des Moines Roosevelt’s Tabby Keith during Tuesday’s CIML Metro match at Evans Middle School in Ottumwa.

The arms and legs were flying all over the place instinctually and almost acrobatically on defense. The crowd, one of the largest of the year, was electric.

Then, it didn't. And the momentum shift was abrupt.

The Bulldogs battled back from a six-point deficit to lead late the opening game, but couldn't finish it off and Roosevelt responded for a 25-23, 25-10, 25-21 CIML Metro sweep on the Bulldogs' Senior Night, and once again claim the regular-season league championship.

"We were just reacting instead of thinking. We were so sure that first game was going the end the way we thought," Ottumwa coach Ruth Thomas said. "But it was a like a splash of cold water. It took everything we had just to get back in it."

The cold water was just the quencher for the Roughriders, who finished out the win, then jumped out to leads of 8-0 and 15-1 in the second game was Ottumwa had no answer for Roosevelt's serving or hitting. Roosevelt needed only long serving runs by Adrien Hanson and Tabby Keith to take a commanding lead.

"We couldn't receive the serve, we couldn't set and we couldn't hit," Thomas said. "Roosevelt put up a strong block in that game though. It's just frustrating for our seniors. I'm really proud of how we played. We played at a competitive level."

Roosevelt (17-13, 5-0 Metro) gradually pulled away in the third game, as a pair of kills by Rachel Galluzzo helped it take a 16-11 lead. The Bulldogs fought back within 20-19, but a clutch service ace and more well-placed hits carried the Roughriders to the win.

The Roughriders appeared in control of the first game up 18-12 before all the excitement. Ottumwa (18-15, 3-2) inched back within 21-20 on a kill by Ally Paris, then eventually led 23-21 on a kill by Chloe Schneckloth, forcing a Roosevelt timeout.

However, Roosevelt regrouped, took a 24-23 lead on an ace serve by Hanson, then won it on a kill by Galluzzo.

"It was one of those things where no one wanted to be the one to make a mistake, and we started thinking a little bit too much," Thomas said. "We didn't let our natural abilities finish the game."

Thomas expected a bit of a letdown in the second game, but not as precipitous as it was. Roosevelt spotted its serves well, hit balls that deflected off blocks and found holes in the back row in a commanding win.

"I was very impressed with their setter being able to take the ball off the back corner and really manage the ball," Thomas said. "That took us by surprise. We just weren't able to read it."

"Most of them have played together since fifth grade, so they've had eight years of volleyball together," she said. "The groundwork for their success was laid then, and I'm pleased with where the program continues to go in the lower levels."

Ottumwa competes against Des Moines Lincoln and Des Moines East in the first round of pool play matches in the Metro tournament Thursday at Lincoln.

OTTUMWA [mdash]Ricky D. Guthrie, 60, of Ottumwa, died May 21, 2020 at home. He was born February 17, 1960 in Ottumwa to Ronald D. and Janet A. Skinner Guthrie. He married Pamela L. Widger and they later divorced. An Ottumwa resident most of his life, Ricky served in the U.S. Army. He loved r…