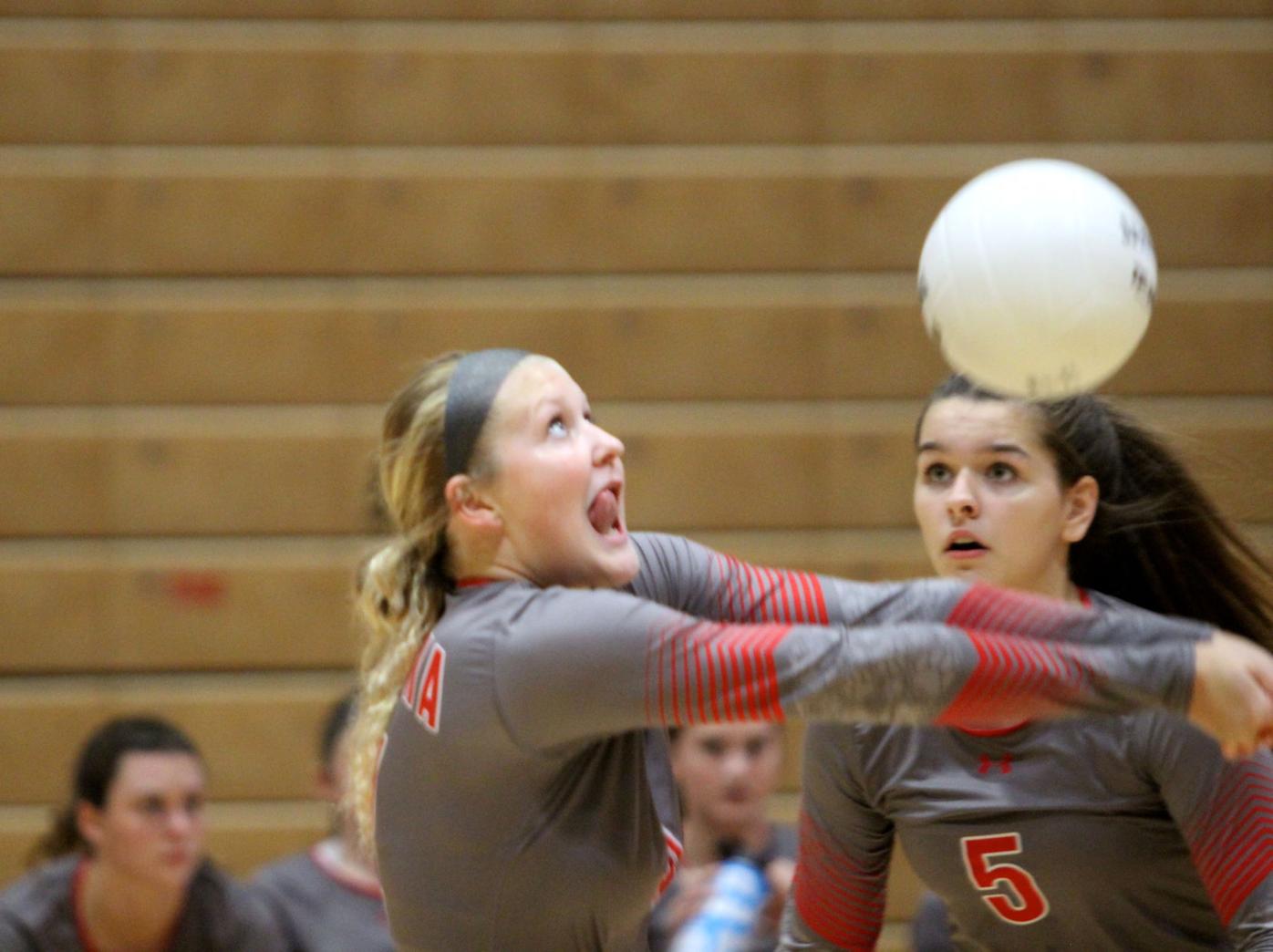 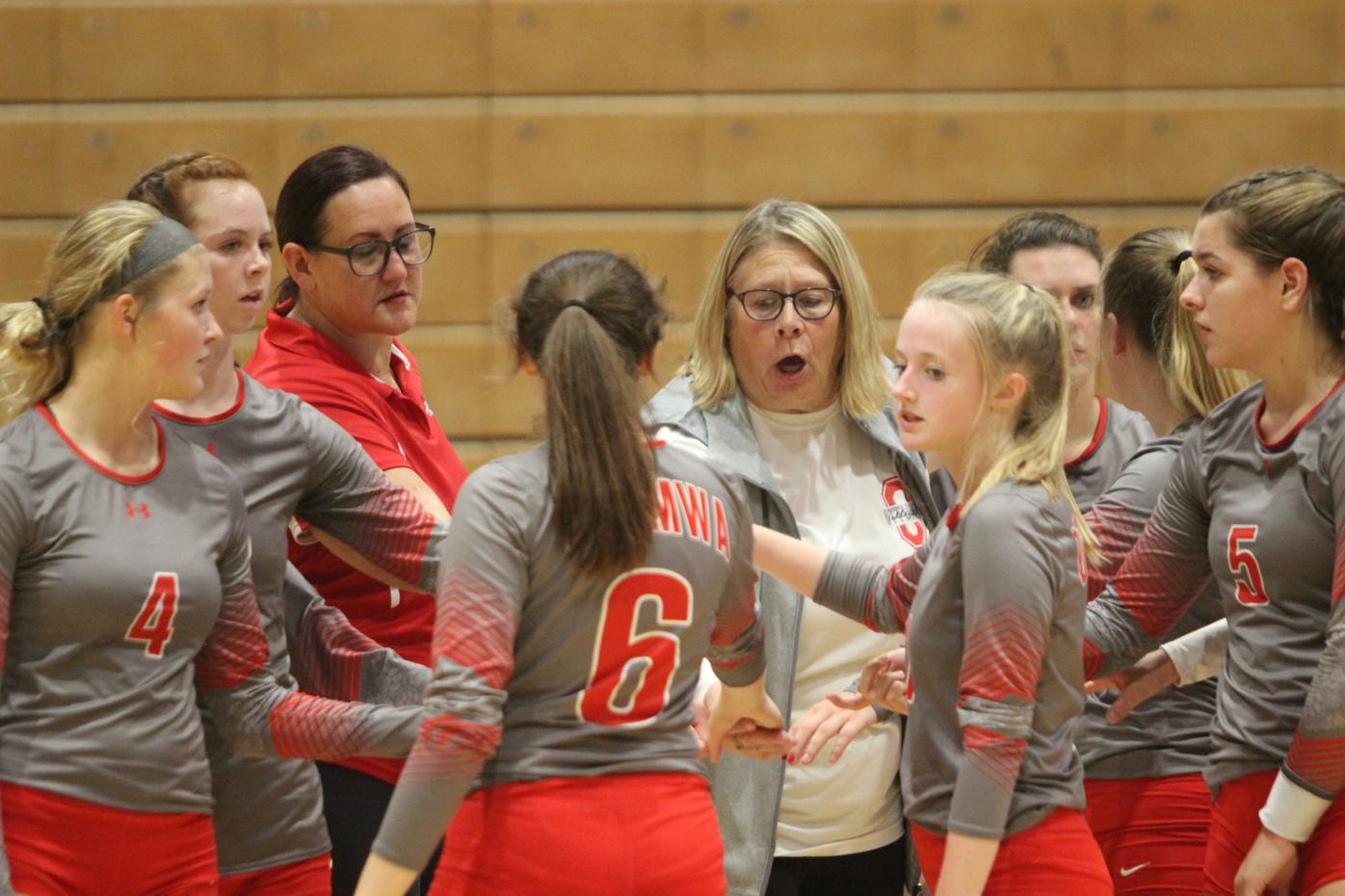 Ottumwa head volleyball coach Ruth Thomas encourages her team during a timeout on Thursday night as the Bulldogs took on Marshalltown at Evans Middle School Gymnasium.

Ottumwa head volleyball coach Ruth Thomas encourages her team during a timeout on Thursday night as the Bulldogs took on Marshalltown at Evans Middle School Gymnasium.

OTTUMWA – Even in defeat, Ottumwa head volleyball coach Ruth Thomas found something she could use to build her team’s confidence moving forward this season.

It was found on the scoreboard at Evans Middle School Gymnasium, where the score read 25-19 in favor of the Marshalltown Bobcats. It was the final score of the final game in a sweep for Marshalltown, winning 25-12, 25-16 and 25-19 on Thursday night.

Considering the scoreboard once read 9-0 in favor of Marshalltown, Thomas saw the final score as a step in the right direction for a squad that battled through injuries to try and keep the fight alive in a CIML crossover clash.

“I told the girls to remember where they started at the game and look up at where they ended things,” Thomas said. “We fought back and put the pressure on them. We really kind of got a handle on the game and forced them to use up their timeouts. We made Marshalltown readjust to what we had already readjusted to.

“The girls did a really nice job of changing up their game to match up with (Marshalltown). There are a lot of times during the season we continue with what we’re most comfortable with, but tonight, I feel like we tried to experiment with what would work best against the team we were playing.”

Ottumwa (12-8) has had to adjust on the fly over the past couple weeks, becoming the latest Bulldog team to battle injuries during the fall sports season. Already without junior Chloe Schneckloth, who suffered a deep ankle sprain in practice, the Bulldogs lost another key player during this past weekend’s Ottumwa Invitational when senior libero Mercedes Coram went down with a concussion during the first match of the day against Davis County.

Sophomore Kiley Heller was back in the libero uniform for Ottumwa on Thursday after finishing out the remainder of the home tournament on Saturday and playing in all three sets of Ottumwa’s CIML Metro conference road sweep Tuesday at Des Moines North. Still, the difference in experience between five matches started by Heller and a returning senior like Coram was evident on Thursday as the Bulldogs finished with over 30 errors in the match including 22 missed hits at the net.

“It’s not just about experience. It’s about leadership. Mercedes has been with me for three years on the varsity squad,” Thomas said. “It was wonderful having Mercedes on the bench tonight. She’s really struggled being able to very much of anything that’s normal. This was her first full day in school. Even that’s been a challenge for her this week.

“When they (Coram and Schneckloth) come back, they’ll come back fully healthy. Chloe is working her way back slowly. We want both of them back for the long haul, not a temporary return for one match. We want them back at 100 percent.”

Heller did match Loren Egbert and Ashley Jones with 10 successful serves and had a team-leading seven digs at the libero position. After allowing 14 errors in the opening set, helping aid Marshalltown’s 13-point win, Ottumwa jumped out to a quick 5-0 lead in hopes of tying the match at a game apiece.

Marshalltown (5-7) rallied back behind sophomore Autumn Finch, who went head-to-head with OHS junior Anne Guest at the net as the main hitting threats for both teams. Both players finished with 12 kills, but it was Finch that rallied the Bobcats midway through the second set with a trio of kills that helped Marshalltown take an 11-9 lead and hold on despite three chances for Ottumwa to even the score after losing the lead.

The Bobcats appeared on their way to an easy win in the third set before the Bulldogs began to chip away at the 9-0 deficit. Guest had a pair of kills during a three-point run that brought Ottumwa back within 9-3, added a pair of blocks during two more 3-0 OHS runs and scored her final point prior to a wide tip by the Bobcats as Ottumwa got as close as 20-16.

Ultimately, Ottumwa could not completely overcome the deficit. Guest served long at 22-18 before a kill by Ally Paris again pulled OHS back within four. Hayden Oetker’s kill and an ace by Lyris Kapaueu closed out the night, leaving Ottumwa in search of a bounce back win in a CIML Metro road test next Tuesday at Des Moines Lincoln.

“The nice thing about going through these injuries is the younger players getting experience,” Guest said. “We’ll have them ready not just in case someone gets injured again, but ready to step in to those larger roles full time next year.”

Scott Jackson can be reached at sjackson@ottumwacourier.com.

OTTUMWA [mdash]Jerry Junior Majors, 90, of Ottumwa, passed away March 2, 2021. Surviving is his son, Jerry Lee (Patty) Majors of Ottumwa; grandson, Shelby Edward Majors; and great-grandson, Kadence Lee Majors. His body has been cremated and no services are planned. Memorials may be made to t…