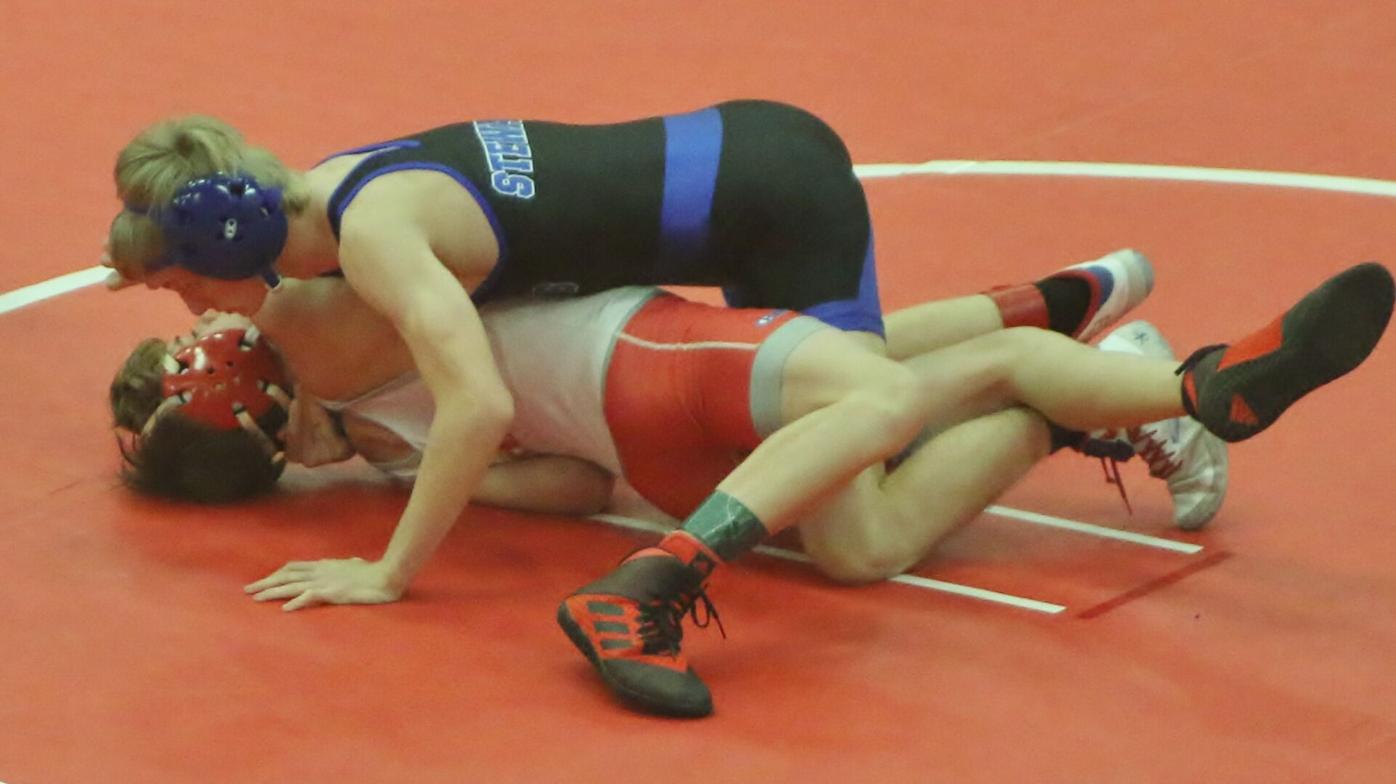 Wyatt Stewart secures a pin for Albia at 106 pounds against Chariton sophomore Blake Sharp on Thursday night during a South Central Conference quadrangular meet at Chariton. 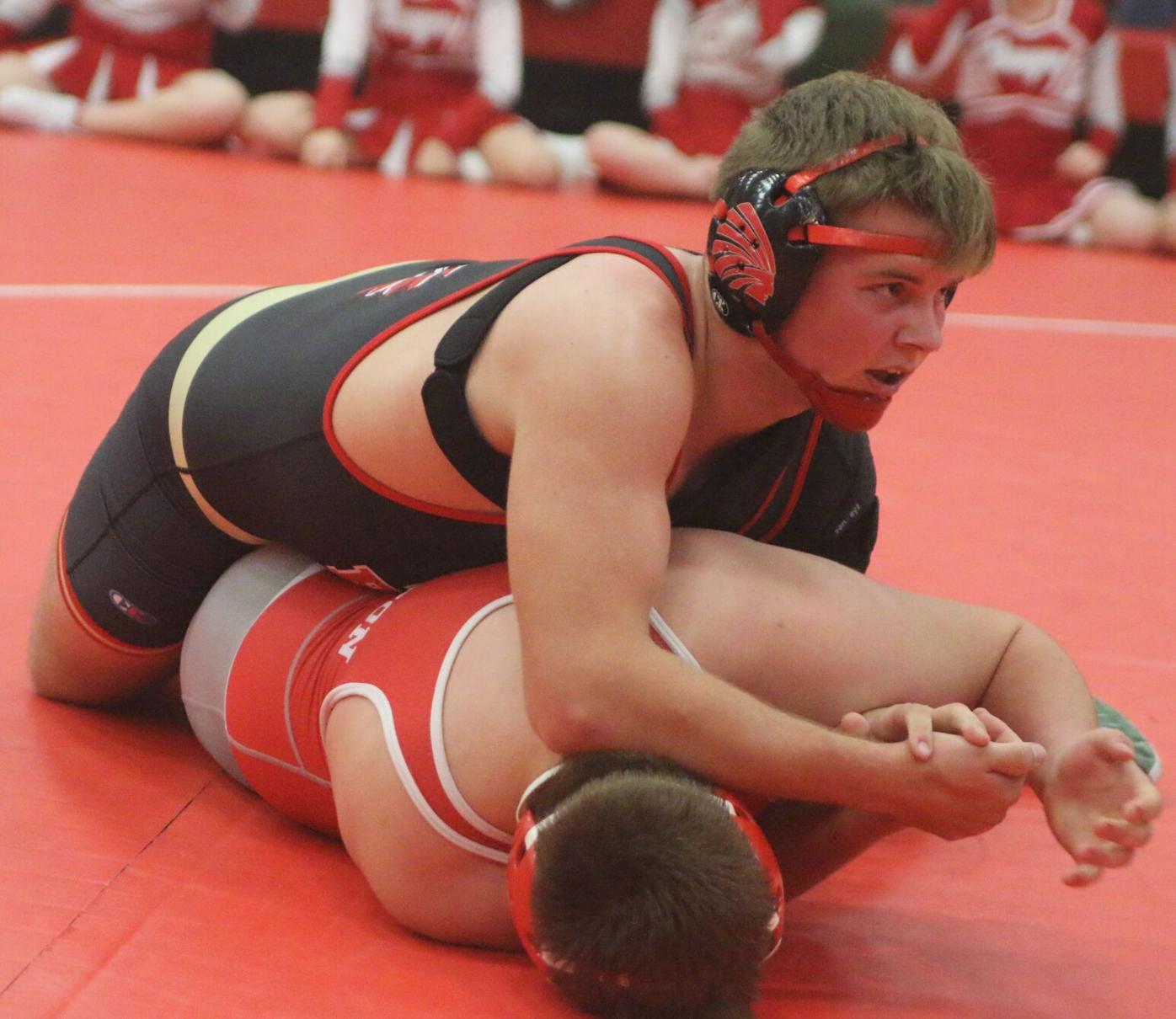 Wyatt Stewart secures a pin for Albia at 106 pounds against Chariton sophomore Blake Sharp on Thursday night during a South Central Conference quadrangular meet at Chariton.

"Eddyville-Blakesburg-Fremont and Knoxville might still have to say about that," the head coach of the Blue Demons said.

One week after winning a second straight SCC tournament title, scoring 250.5 points last Thursday at Knoxville, Albia scored three straight conference dual wins at the Charger Dome in Chariton. The Blue Demons rolled to a 54-21 win over Centerville, a 69-12 win over Chariton and finished the night dominating Davis County 78-4 in the final round of the quadrangular.

"As a tournament team, we had good luck last week. We had the kids prepared, ready to go and had everyone in the right weights," Wenger said. "You never know what you'll get when you turn the page into the dual seasons. We're off to a good start there. I'm big dual fan, so I'm glad we can compete as a dual team."

Albia wrestlers combined to win 20 of 24 matches held against their three conference opponents. Five Blue Demons grapplers secured wins in less than a minute against Centerville, setting the tone for another dominant night on the mat against SCC rivals.

"I feel like both (the tournament and dual SCC titles) are equally as important," Albia senior Carter Anderson said. "This year, especially, the duals are even more important. We have a goal set in mind to do better than we've ever done at state duals. The conference duals are, hopefully, going to set us up for success later in the season."

"There's a lot of stuff we can still improve on," Anderson said. "We're going to get tested this weekend at Bondurant-Farrar. It's going to be a huge step in how we progress this season. I feel like, through our lower weights, we are really competitive in practice. We have a couple people this year that may not have made the varsity line-up last year that are stepping up and are better that a lot of varsity wrestlers around the state."

Davis County (7-4, 2-1 SCC) was able to match the Blue Demons through the first two rounds of the quadrangular by earning a 41-32 win over Chariton and a 40-36 win over Centerville. Emmitt Newton (106), Kade Martin (113) and Taylor Huggins (152) picked up key pins for the Mustangs to put away the Chargers while Newton, Morgan Van Hemert (132), Deken Sorenson (138) picked up falls against the Big Reds, setting up Huggins for a 16-6 major decision over Jax Mosley at 145 pounds that ultimately proved to be the dual's decisive match.

"We were able to really match up well with Chariton and Centerville in the lower weights. That's where we are really strong," Davis County head wrestling coach Adam Newton said. "For the newcomers, this was big. They got some key wins on the board. Emmitt wrestled well. So did Taylor. This is Morgan's first time breaking the varsity line-up, so this night should do a lot for his confidence."

Centerville (3-2, 1-2 SCC) was able to escape the Charger Dome with a win, edging Chariton 40-30 in a dual that came right down to the final match between junior heavyweights. Cruize Flanders, simply needing to avoid giving up a pin to clinch the win, dominated Dallas Furman 9-0 officially clinching the dual for the Big Reds by reversing out from the bottom with a minute left in the match.

"You can't really go out there thinking to yourself that you just need to avoid a pin. You have to go out there and wrestle as aggressively as you would in any other situation," Flanders said. "I was a little concerned in that final period. I lost a match earlier this year to a kid that threw my legs. I wasn't going to let that happen again. I just went back to basics to control the match."

Sarah Lewis also secured a key win for the Big Reds against the Chargers, winning an all-female battle at 138 pounds pinning Jada Kelley in 94.5 seconds. The younger sister of four-time state champion Matthew Lewis is hoping to make her own run to a state title with sights set on the IWOCA Girls State Wrestling Tournament in Coralville next month.

"I feel like I'm wrestling pretty good. I just have to get my technique down," Sarah Lewis said. "I've gotten a lot of good advice from my brother to stay hungry, stay hard and continue to work for your success."