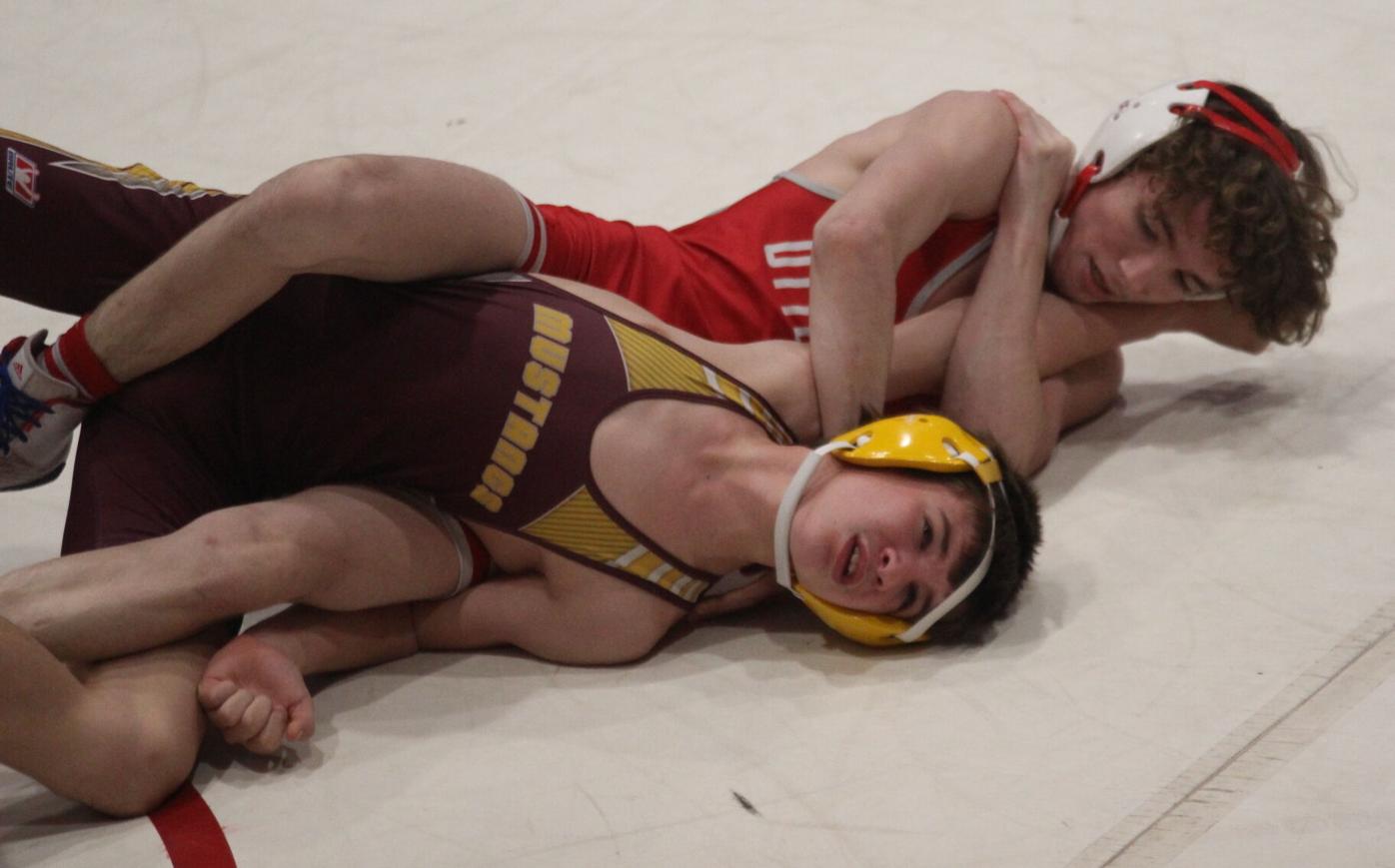 Ottumwa junior Corbin Grace locks in a first-period fall against Davis County freshman Brogan West on Saturday on the way to winning the 113-pound championship at the Ottumwa Invitational inside Evans Middle School Gymnasium. 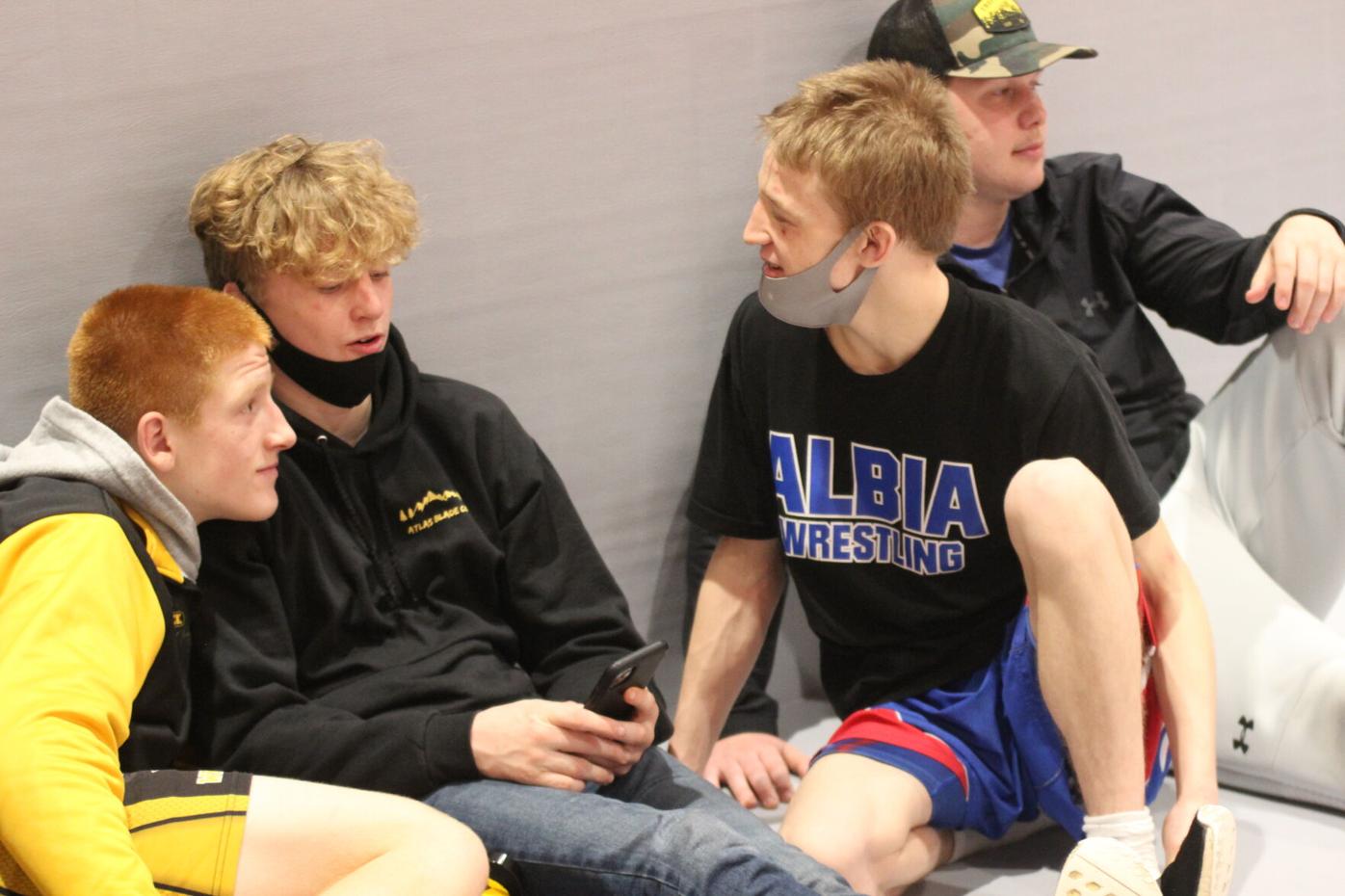 Ottumwa junior Corbin Grace locks in a first-period fall against Davis County freshman Brogan West on Saturday on the way to winning the 113-pound championship at the Ottumwa Invitational inside Evans Middle School Gymnasium.

Those 10 wrestlers nearly did enough to beat 10 other schools at the 2021 Ottumwa Invitational.

Carter Anderson, Justin Keller and Stephen Conley picked up championships for the Albia wrestling team. Seven of Albia's 10 wrestlers wrestled for titles, including a showdown of teammates at 106 pounds, as the Blue Demons racked up 181 total points to beat all nine Iowa schools in the tournament.

Kirksville, the lone representative from Missouri, would outlast Albia for the team title. The Tigers, with 12 wrestlers, edged the Blue Demons by 3.5 points with championship wins by Dominic Cahalan (138) and Tristan Gillispie (160).

"We chose to keep a few kids home. It's just a sign of the times," Albia head coach Dave Wenger said. "We've got bigger aspirations. We've got to keep kids healthy and we have to make decisions that will effect February. Keeping in mind the end of the road rather than the middle of the season, picking and choosing (who to wrestle) to make sure we're doing the right thing with each and every one of our kid and finishing second here is good."

Albia entered Saturday fresh off three dual wins at Knoxville on Thursday, putting a much-different looking line-up on the mat in the South Central Conference quadrangular. The Blue Demons topped Chariton (72-6) and Eddyville-Blakesburg-Fremont (58-21) while finishing the night earning a 48-27 win over the Panthers.

"Historically, any time these teams get together, you can pretty much expect a dogfight from start to finish," Wenger said. "This night was no different. We were really presented with quite a few individual match-up problems in each dual that forced us to bounce our line-up around a bit to put our kids into the best possible position to be successful."

The Ottumwa Bulldogs saw their bid for a team championship in their home tournament end midway through competition on Saturday. The Bulldogs rallied in the championship rounds to finish in third place with 130 points.

"I think it was round three that was rough for us," Ottumwa head coach Jeremy Frueh said. "Things just kind of snowballed. We lost a lot of matches in that round that we were winning. If we could have had a mulligan on that third round, we'd have done a lot better."

Ottumwa did have one wrestler reach the top of the podium by the end of the home tournament. Corbin Grace improved to 22-5 on his junior season by sweeping through five rounds of competition at 113 pounds, scoring a pair of pins before winning a 15-8 decision over Kirksville junior Chance McKim and a 5-2 decision over Albia sophomore Brodie Conner in the final round.

"We don't want anyone else to come here and take away our championship," Grace said. "This is our home. We want to guard our turf."

Sigourney-Keota placed sixth with 113.5 points. Jack Clarahan (26-2) scored 34 points, winning the 160-pound title, earning four pins for the Cobras before receiving a forfeit in the finals when Liberty senior Jarrod Alger could not compete in the title match.

"It was going to be a good match, I feel like. I watched him wrestle a few times and he looked pretty good," Clarahan said of Alger. "I felt really good wrestling. It stunk that he had to leave, but I guess it happens."

Davis County placed eighth in the tournament with 102.5 points. Dawson Townsend secured the 120-pound title, improving to 13-2 on the season picking up four pins in the first period including a fall in 40 seconds against Keokuk freshman Nolan Riddle to clinch the championship.

"I just went out there and wrestled like I could," Townsend said. "It means a lot to me to get back on track. Hopefully, I can carry the momentum into this week and next week and do a lot better."

Albia led most of the day in the chase for the team title at the Ottumwa Invite, opening a commanding lead with wrestlers contending for titles in six different weight classes. Carter Anderson won the 106-pound championship improving to 22-1 on his junior season, handing sophomore teammate Wyatt Stewart his first loss with a 10-2 major decision in the fifth and final round.

"I knew coming in that he (Stewart) would make the finals," Anderson said. "We both knew this would be part of what we call wrestle-offs. We don't wrestle-off during practice like most teams. Our wrestle-offs are mostly like live wrestling unless one of us step up to ask for a true wrestle-off. This was part one of three wrestle-offs.

"It was a little bittersweet. I know Wyatt is a little sad about this result, but he's getting better. Last year when we wrestled, I scored a tech fall in the first period. I can almost guarantee he's going to be somewhere on the podium at the state tournament some day."

Stephen Conley, who won three matches for the Blue Demons on Thursday, improved to 19-3 on the season with three more round-robin pins on Saturday at 152 pounds. After winning 10-4 over Fairfield senior Logan Adam, Conley kept Albia's team championship hopes alive with a 1-0 win over Kirksville senior Logan Blickhan in the finals.

"Tournaments are more for individual awards, but we're also here to win a team title," Conley said. "We talked about it all day about how close the points were. We all went our there with the goal of getting as many points as possible to try and bring that championship home."

Fairfield finished ninth with 88.5 points. Cohyn Roach (8-3) advanced all the way to the 138-pound title match, falling 6-0 to Cahalan in the finals.