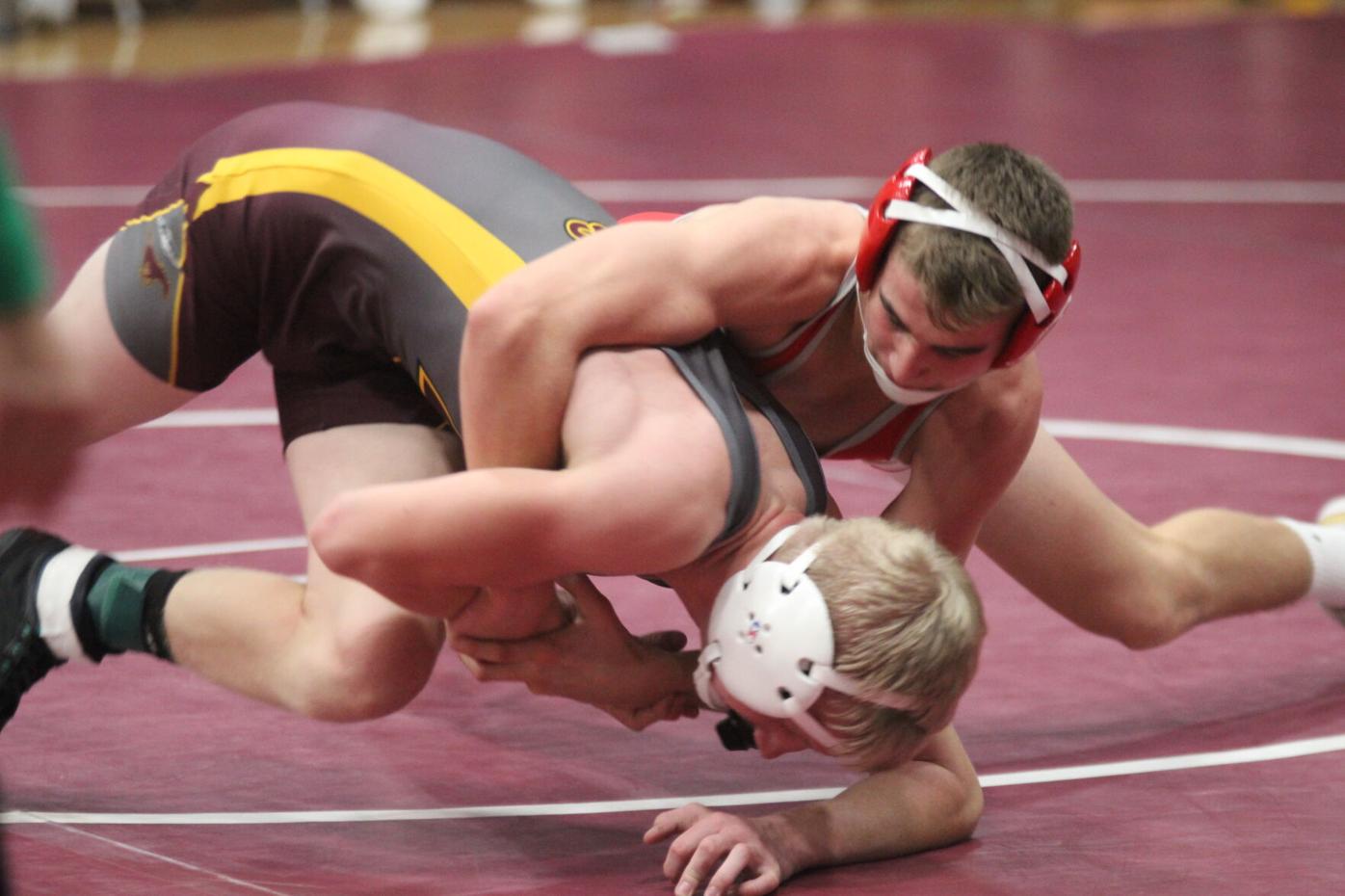 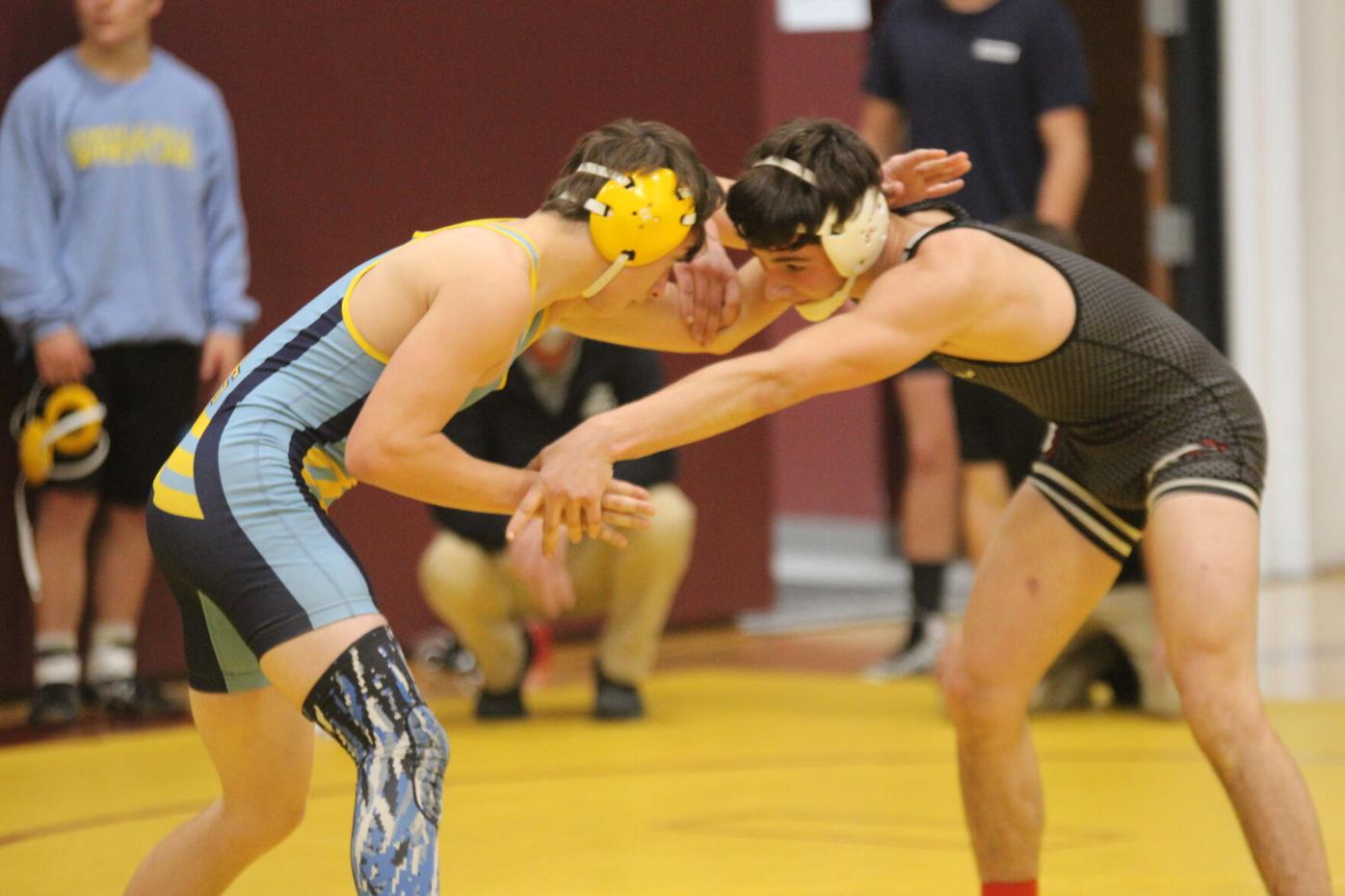 BLOOMFIELD — If the first night of the high school wrestling season is any indication, big things are in store for the Ottumwa Bulldogs on the mat in the 2020-21 campaign.

Four pins in the first five matches set a much different tone in the season opener for Jeremy Frueh's squad one year after losing two of three duals at home and 16 of 36 matches wrestled against Lynnville-Sully, Davis County and Pekin. The Bulldogs rolled to four straight dual victories, beating Lynnville-Sully 66-16, Davis County 52-24, Pella 45-33 and Pekin 60-24. Trevor Summers scored four pins to open his junior campaign, one of five OHS wrestlers to finish without a loss during the five-team competition at Davis County High School.

"Our conditioning was really good. We're in very good shape. You can tell we have a lot of kids that have worked really hard. That's a testament to their work ethic," Frueh said after opening his eighth season at the helm of the Bulldogs with four dual wins. "We had a lot of the same kids that were in the line-up last year. Those same kids wrestled a lot better."

Ottumwa went from 16-20 in matches wrestled in last year's season-opening dual to 28-16 in the four duals wrestled on Tuesday. The Bulldogs scored 20 pins throughout the night, nine more than last year's season opener, with improved performances from several returning wrestlers.

"Dawson Goodwin wrestled his butt off (scoring 19 points in Ottumwa's four duals winning three matches with a fall, a major decision and a 7-2 win over Pella's Logan Schoreder at 120 pounds). We had three freshmen (Braylon Griffiths, Jasmine Luedtke, Daltin Doud) that earned their first wins. They all competed really well winning three of their four matches.

"Everyone really competed. There was some really good stuff. There's still some work to be done, but we've got a group of kids that are buying in and ready to work really hard."

Ottumwa won the first five matches against Lynnville-Sully, scoring three pins in the first period to open a 28-0 lead over the Hawks. Zachariah Shoemaker picked up his first of three pins during the night, scoring a fall in 98 seconds at 152 pounds over Reese Dunsbergen before Summers pinned Ty Jones in 55 seconds at 170 pounds to clinch Ottumwa's first win of the season.

"We've put in a lot of work in the wrestling room. It's great to see that hard work pay off," Shoemaker said. "I think everyone put the pieces together. We've got a lot of confidence. I've started to believe in myself a lot more seeing what I'm capable of.

"Trevor is always confident. He never second-guesses himself. If you put that hard work in, you know the results will come."

Ottumwa spoiled Davis County's season debut, again jumping out to a large lead by winning the first three matches to open a 16-0 lead. The most dramatic of those early wins came from Griffiths, who erased a 5-3 deficit in the third period by not only taking down Mustang junior Dawson Townsend but securing the shoulders to the mat to clinch a sudden pin 45 seconds into the final period.

"That was a huge match for Braylon. He stayed within himself even when he was down," Frueh said of Griffiths. "He never had his head down mopping around out on the mat. He kept his head up and he kept competing every single second. Braylon's in good shape, powered through that late deficit and got a huge win for himself and for the team."

Davis County finished the night 1-2, bouncing back to beat Lynnville-Sully 36-30 with late pins by Gavin McCall (220) and Kade Martin (106) securing the first dual win of the season for the Mustangs. Pella topped Davis County, 58-24, in the final dual of the night with Townsend (126) and Huggins (132) scoring falls for the Mustangs against the Little Dutch.

"It was the typical first meet. You just don't know what's going to happen," Davis County head wrestling coach Jim Nelson said. "We're still changing weight classes and settling in. I'm pretty content with what we did. We've got kids that have been wrestling 10-12 years. We've also got kids that have only been wrestling 2-4 years. I think we did pretty good with the mix of experienced wrestlers and newbies."

Davis County had the distinction of being one of the schools around the state to host a night of high school wrestling in Iowa for the first time since the ongoing coronavirus pandemic hit less than a month after last year's state wrestling tournament. Aside from the limited amount of fans allowed to attend, limited to only select family members of wrestlers and coaches, the night looked mostly the same as any other night of competition.

"I'm not ignoring COVID-19, but life has to go on," Nelson said. "I'm glad we could host a tournament. I just don't know where the season will go, but I hope we keep surviving. I hope the state doesn't cancel our season. I don't want to see what happened to the athletes in the spring happen to our kids this year. If we have to keep postponing a match or a tournament here or there, I want to see us make it to a state tournament. I feel like we've got a couple of guys that have the chance to make it there."

Pekin picked up a close win over Lynnville-Sully, edging the Hawks 42-30. Blake Juhl clinched the first dual victory for the Panthers, pinning Jones 32 seconds into the second period at 170 pounds. Michael Jones finished 3-0 with three pins in the first period for the Panthers at 138 pounds while senior Mason Juhl earned two pins in the first period and a forfeit in his debut at 182 pounds after competing at 195 and 220 pounds in his first three seasons.

"He's really worked on trimming up his body for his senior year," Pekin head wrestling coach Al Chapman said of Juhl. "He's full of energy. He kept himself around 190 pounds during football season. He's worked his way down the right way. He's got a shot at our all-time wins record (144 by Ryan Vogel). He entered this season with 107 wins and got to 35 last year and didn't get out of districts. It's definitely within reach."

While Ottumwa heads to Gilbert this weekend, Juhl and the Panthers will host their own tournament on Saturday. Davis County will be one of several area teams that will be competing as area high school wrestling action rolls on in the midst of a pandemic.

"No fans will be allowed, but we'll have it on our Facebook page. Albia's come in there and taken the championship trophy. We feel like we have to horses to give them a run for it this year," Chapman said. "We're doing everything we can to keep our season going. We'll wrestle until they pull the mats out from under us."