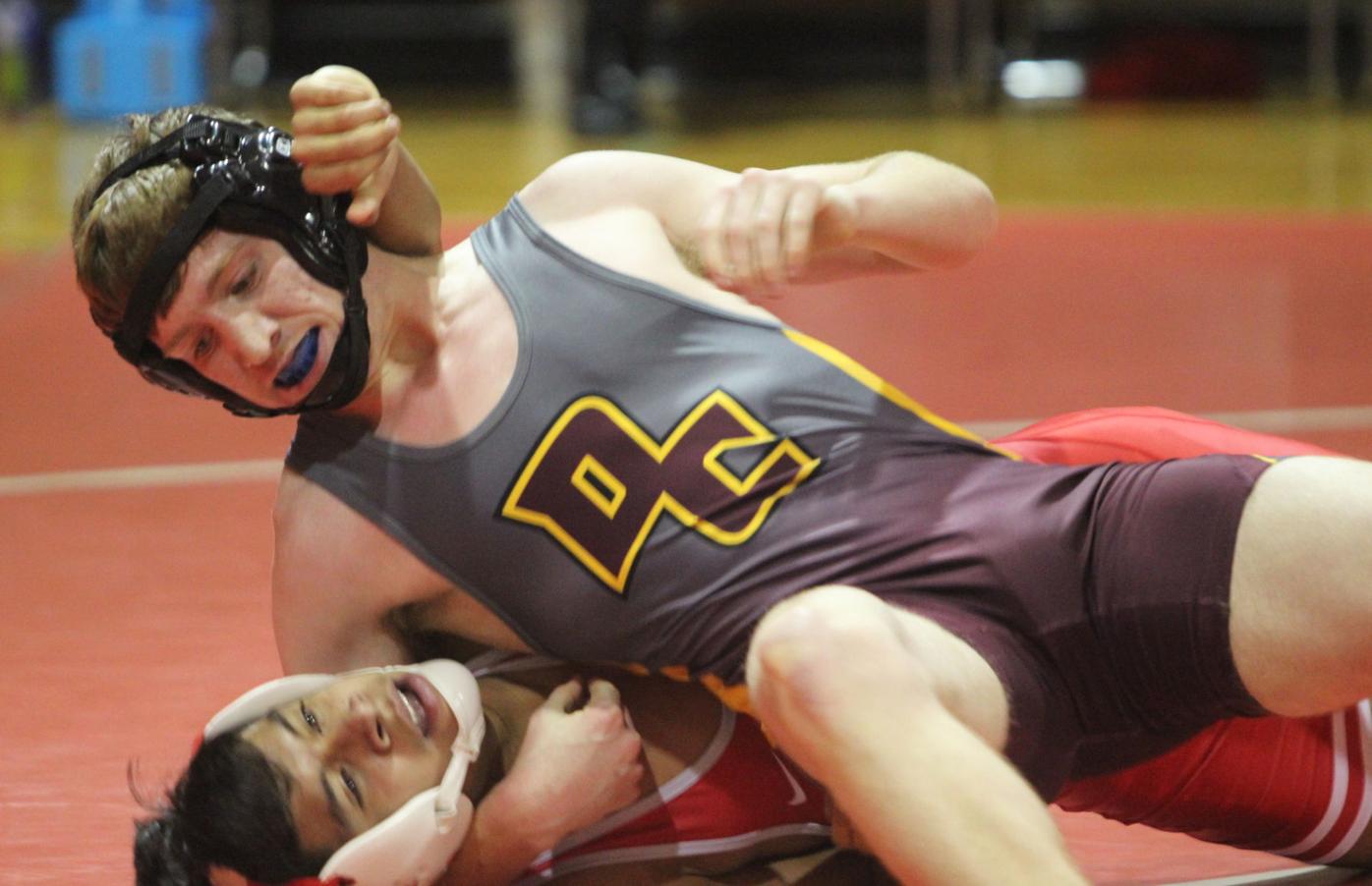 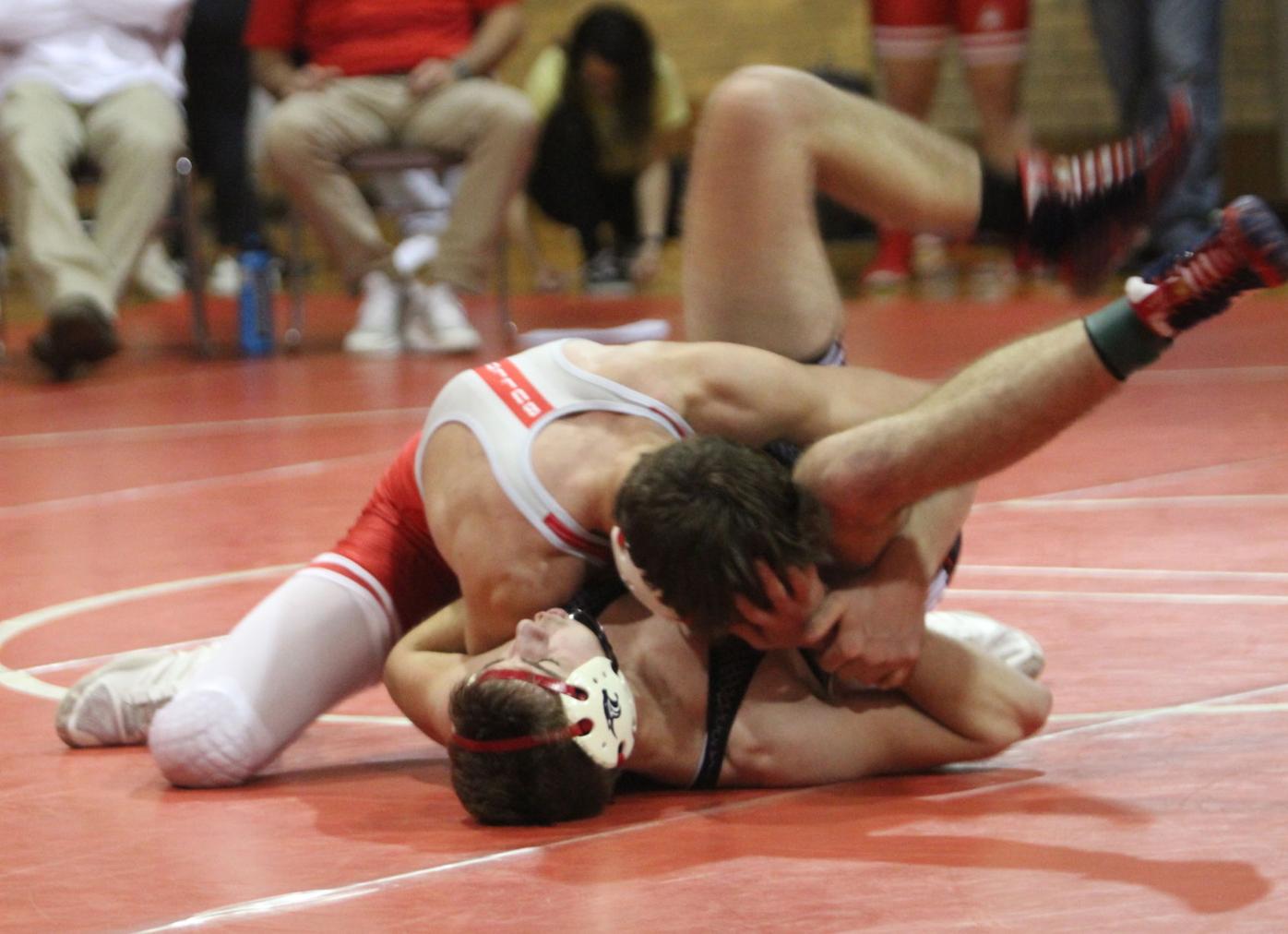 Ottumwa sophomore Trevor Summers scores a hard take down against Pekin’s Cole Earnest on Tuesday night during a 160-pound prep wrestling match at Ottumwa High School. The takedown would lead to an injury default, causing Earnest to suffer a stinger. 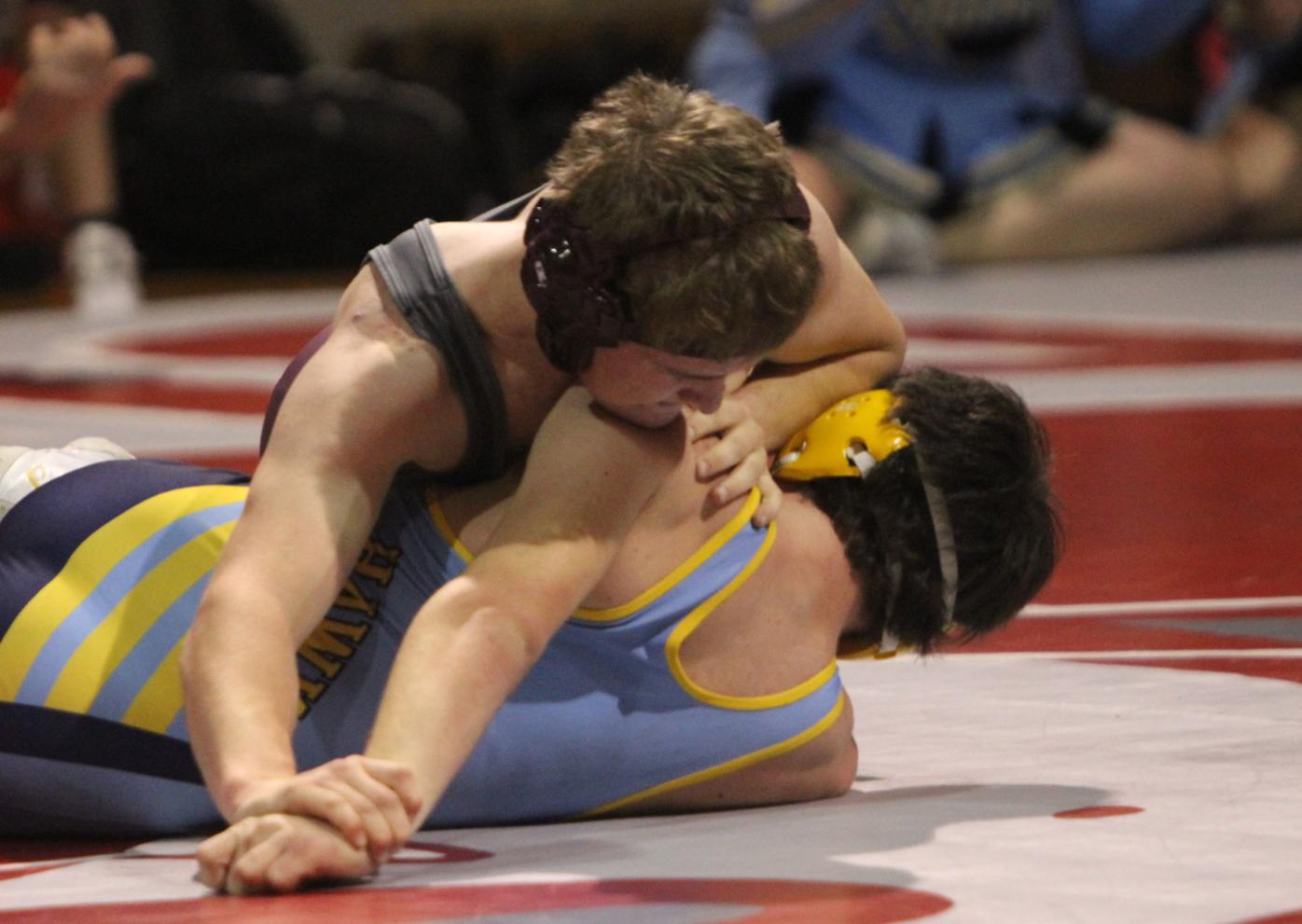 Davis County junior Austin Payne battles for control with a wristlock on Lynnville-Sully sophomore Brodey Johnson on the way to earning a 20-10 major decision on Tuesday in a 152-pound prep wrestling match at Ottumwa High School’s gymnasium.

Ottumwa sophomore Trevor Summers scores a hard take down against Pekin’s Cole Earnest on Tuesday night during a 160-pound prep wrestling match at Ottumwa High School. The takedown would lead to an injury default, causing Earnest to suffer a stinger.

Davis County junior Austin Payne battles for control with a wristlock on Lynnville-Sully sophomore Brodey Johnson on the way to earning a 20-10 major decision on Tuesday in a 152-pound prep wrestling match at Ottumwa High School’s gymnasium.

OTTUMWA – When it gets right down to it, the fundamentals of wrestling are what Pekin head coach Al Chapman focused his kids on heading into the first two duals of the season.

“I tried to tell the kids the other day, it doesn’t matter if it’s a 3A, 2A or 1A school. A half-nelson is a half-nelson in each class,” Chapman said.

Both Pekin and Davis County left Ottumwa High School’s wood gymnasium with a pair of dual wins to open the high school wrestling season. The Panthers, joined by Lynnville-Sully as the representatives from Class 1A, left without a loss beating the Hawks 54-18 in the opening session before closing the night with an impressive 45-35 victory over the 3A OHS Bulldogs.

“They put on their shoes one at a time just like we do, so our focus was on just being the better wrestlers on the mat,” Chapman said. “We were not going to treat anyone any different, even if Ottumwa is the bigger school.”

The Panthers and Mustangs, the lone 2A school in the five-team dual extravaganza, picked up season-opening wins over Ottumwa. Davis County scored a pair of first-period falls in the opening two matches against the Bulldogs and never looked back, using three more pins to open a 30-point lead on the way to a 45-30 victory.

Caden Hill, who tore his MCL in his left knee during Davis County’s final football game in October, clinched the win over Ottumwa pinning Brandon McKeag in 54 seconds at 182 pounds. Hill added a second fall later in the night, pinning Pella’s Blake Darnell in the second period giving Davis County a chance at going 3-0 on opening night.

“The past couple years, Ottumwa has kicked the crap out of us,” Hill said. “I think they’ve still got a chance to be a pretty good team. We’ve been doing a lot of live wrestling at practice. We’ve been much more aggressive on our attack. We’re not feeling out moves so much.”

Davis County scored 15 pins in the three duals, adding a 64-18 win over Lynnville-Sully to improve to 2-0 heading into the final dual of the night with Pella. The Little Dutch bounced back from a 46-33 loss to Ottumwa, scoring first-period falls at 220 pounds from Jordan DeRuiter and in the critical heavyweight finale from Braydon Peterson to secure a 42-33 win over the Mustangs, leaving the Little Dutch 1-1 heading back to Marion County while Davis County returned to Bloomfield with a respectable 2-1 season-opening dual mark.

“It’s been quite a while since we’ve beaten Ottumwa. They’ve had the upper hand on us over the years and I thought they might have the upper hand on us tonight,” Davis County head wrestling coach Jim Nelson said. “Give a lot of credit to our kids. They pulled out some key wins. They’re the ones that made it happen.”

Adrian Gomez was one of two wrestlers to win three matches on the night, scoring first-period falls for Davis County at 138 pounds. After catching Ottumwa’s Reese Jones with just 13 seconds left in the opening period, Gomez needed just 30 seconds to pin Lynnville-Sully’s Kyle Squires and 45 seconds to take down Pella’s Dylan Parsons.

“We’ve got three or four kids you can’t count out when it comes to qualifying for state. I hate to speak too soon, but rankings are just numbers on paper right now. I’ve been waiting to coach a state place winner for a lot of years. I’m hoping this is finally the year.”

Ottumwa senior Brody Slack matched Gomez going 3-0 for Ottumwa, following up a 4-2 win over Davis County’s Kolton Stremler with pins at 195 pounds against Pella’s C.J. Smith and Pekin’s Ryan Doud. It was the bright spot in what was an otherwise disappointing 1-2 night for the Bulldogs in what head coach Jeremy Frueh hopes will be a promising season.

“We had a couple guys that did a lot of things well, but we let a lot of matches get away,” Frueh said. “We had matches that we led and ended up getting pinned. We’ve got some young wrestlers, but we’ve also got guys that have wrestled for a long time that are not finishing matches and maybe not preparing like they need to.”

Ottumwa will have to quickly bounce back as the Bulldogs head to Evans Middle School Gymnasium to host a pair of CIML opponents. Dowling Catholic and Waukee will battle the Bulldogs in a varsity triangular on Thursday night at 6 p.m.

“It can happen so quickly in wrestling. Things can change on a dime in the matter of six minutes,” Frueh said. “There just some head-scratchers for us. Guys put themselves in positions they didn’t need to be in. We’ve got to continue to work and clean those things up if we hope to compete in the CIML. We need to get a lot better.”