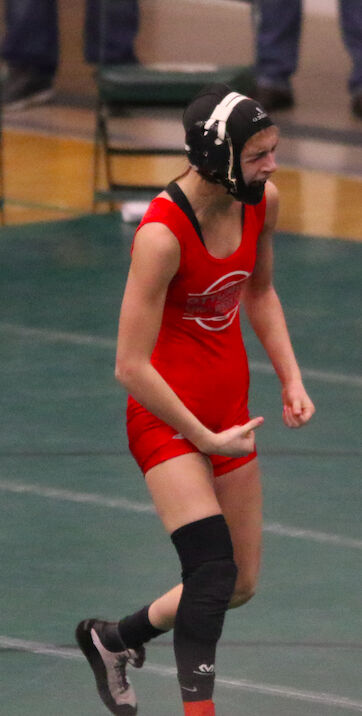 Ottumwa freshman Jasmine Luedtke reacts after clinching a trip to the Iowa High School state wrestling tournament on Saturday at Iowa City West High School. Luedtke became the fourth female state qualifier, and second from Ottumwa, by pinning West freshman Braden Doyle at 3:31 to clinch a spot in the 3A portion of the state tournament competing at 106 pounds. 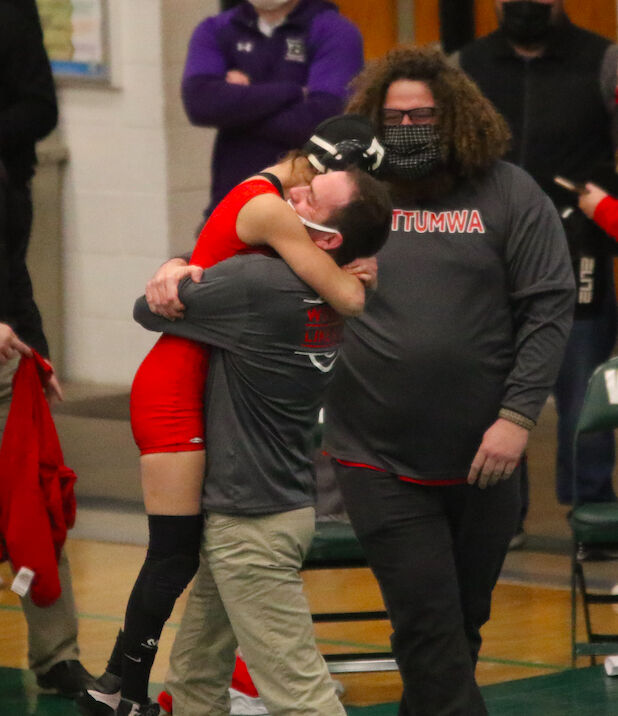 Ottumwa freshman Jasmine Luedtke reacts after clinching a trip to the Iowa High School state wrestling tournament on Saturday at Iowa City West High School. Luedtke became the fourth female state qualifier, and second from Ottumwa, by pinning West freshman Braden Doyle at 3:31 to clinch a spot in the 3A portion of the state tournament competing at 106 pounds.

IOWA CITY — It's been seven years since Megan Black made her way to the podium, becoming the first female qualifier to place at the state tournament.

That was the last time a female had even qualified for the traditional state wrestling tournament.

Jasmine Luedtke followed in the footsteps of Black, one of the first two female wrestlers to qualify for state back in 2013 as a member of the Ottumwa Bulldogs. Luedtke became the fourth on Saturday, joining Bettendorf junior Ella Schmit in claiming a spot in the upcoming Class 3A state wrestling tournament with a runner-up finish at 106 pounds.

Luedtke was one of five Ottumwa wrestlers to qualify for state on Saturday, narrowly missing out on matching the program record for state qualifiers in a single season set back in 2016 with seven. The Bulldogs wrestled their way to a third-place finish in the Class 3A, District 5 tournament at Iowa City West, finishing with 160 points.

Luedtke got her day off to a positive start, pinning Pella freshman Andrew Vanderhoff in just 58 seconds earning the first of the three wins she would need to qualify for state in her freshman season. Luedtke put herself into the district championship match with a thrilling 6-4 semifinal win over Fort Madison freshman Henry Wiseman, scoring a tiebreaking reversal with 21 seconds left in the final period.

Fifth-ranked Iowa City High freshman Kael Kurtz improved to 12-0 by pinning Luedtke at the end of the first period, leaving a state berth up for grabs in a consolation match with Iowa City West freshman Braden Doyle. Luedtke dominated the decisive match for state, opening with a take down and controlling Doyle eventually scoring a takedown and a fall with 29 seconds left in the second period to clinch her trip to state.

Luedtke would have been the first Ottumwa freshman since Karsten Van Velsor in 2010 to qualify for state. Instead, she became the second freshman from Ottumwa to qualify on Saturday after Braylon Griffiths (34-9) punched his first-ever ticket to state finishing second at 132 pounds earning a decisive 12-6 semifinal win over Pella freshman T.R. Putz after opening the tournament scoring a 16-1 tech fall with five seconds left in a quarterfinal match against Oskaloosa junior Phillip Abrahamson.

Corbin Grace got the ball rolling for the Bulldogs, becoming the first of five Ottumwa wrestlers to officially qualify for state as the runner-up at 113 pounds. After coming up one win short of a state berth last year, Grace (36-10) pinned Iowa City West junior Thomas Pierce in 5:14 and Pella freshman Damion Clark in 3:47, a win that would ultimately clinch Grace's first trip to state, before falling 7-3 to Iowa City High freshman Cale Seaton in the district finals.

Trevor Summers, the Bulldog team leader in wins this season, improved to 43-5 on Saturday while clinching his first trip to state. Summers finished second at 170 pounds, pinning Oskaloosa junior Blake Westercamp in just 83 seconds before scoring a 12-3 major decision over Iowa City Liberty junior Drew Snyder in the semifinals, avoiding a wrestleback with the win despite falling to unbeaten Iowa City West senior Ashton Barker in the finals.

Zachariah Shoemaker became the fifth and final Ottumwa wrestler to qualify for state on Saturday, joining Summers and Grace as juniors to qualify for the first time for the Bulldogs. After being pinned by Iowa City West senior Graham Gambrall in the 152-pound district title match, Shoemaker (39-8) bounced back to earn a 16-1 tech fall in 3:13 over Pella junior Quinn Rhamy, following in the footsteps of older brother Nathaniel as a state wrestling qualifier for OHS.

The three-day Iowa High School state wrestling tournament gets underway on Thursday at Wells Fargo Arena in Des Moines. The Class 3A opening-round session will begin Thursday afternoon at 1:30 p.m.

Top-two in each weight class advance to state.