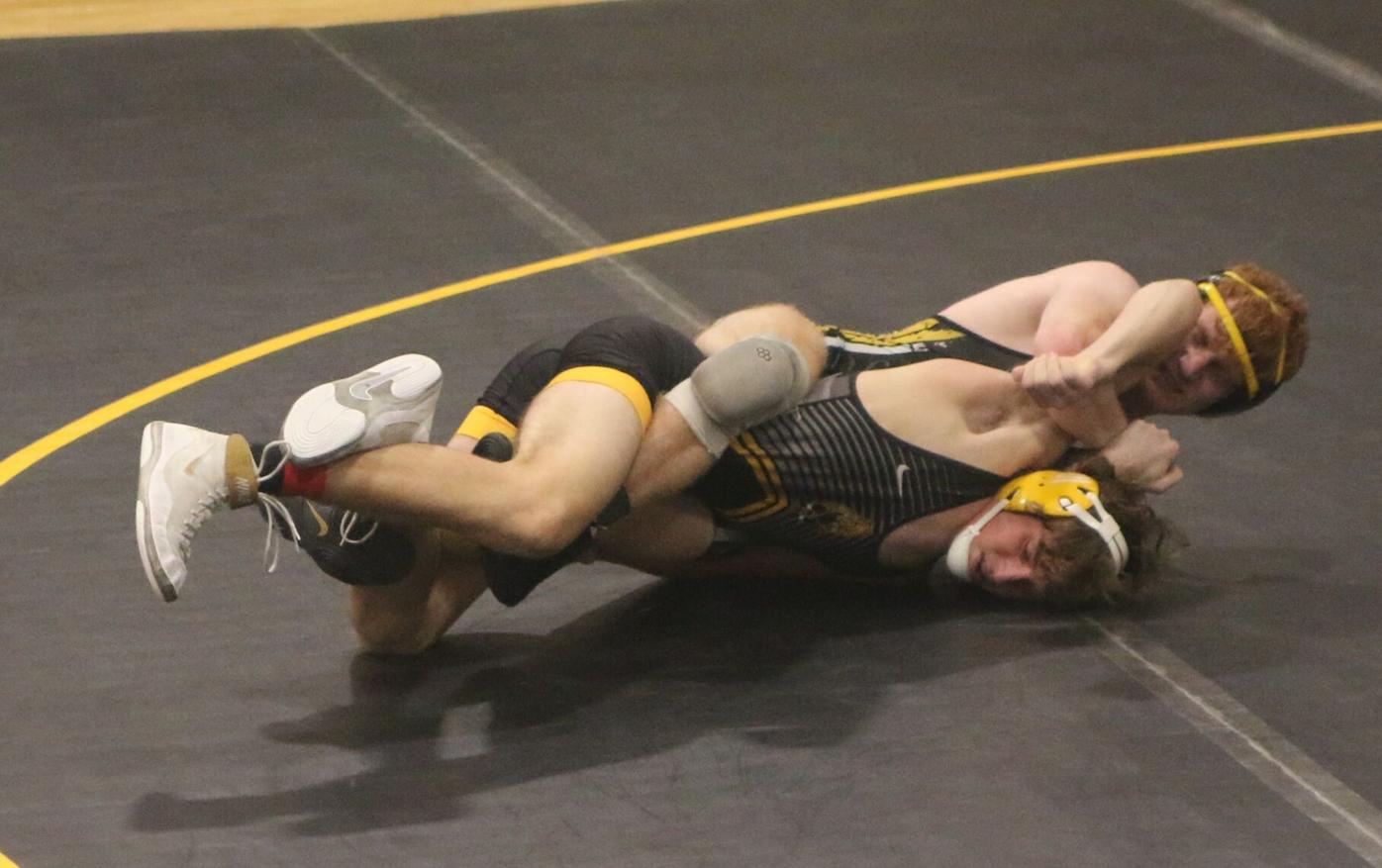 Eddyville-Blakesburg-Fremont senior Hunter McFadden controls Owen Hoover on the mat during EBF's dual with Atlantic-CAM on Thursday in Eddyville at the Richard Lettington Family Duals. 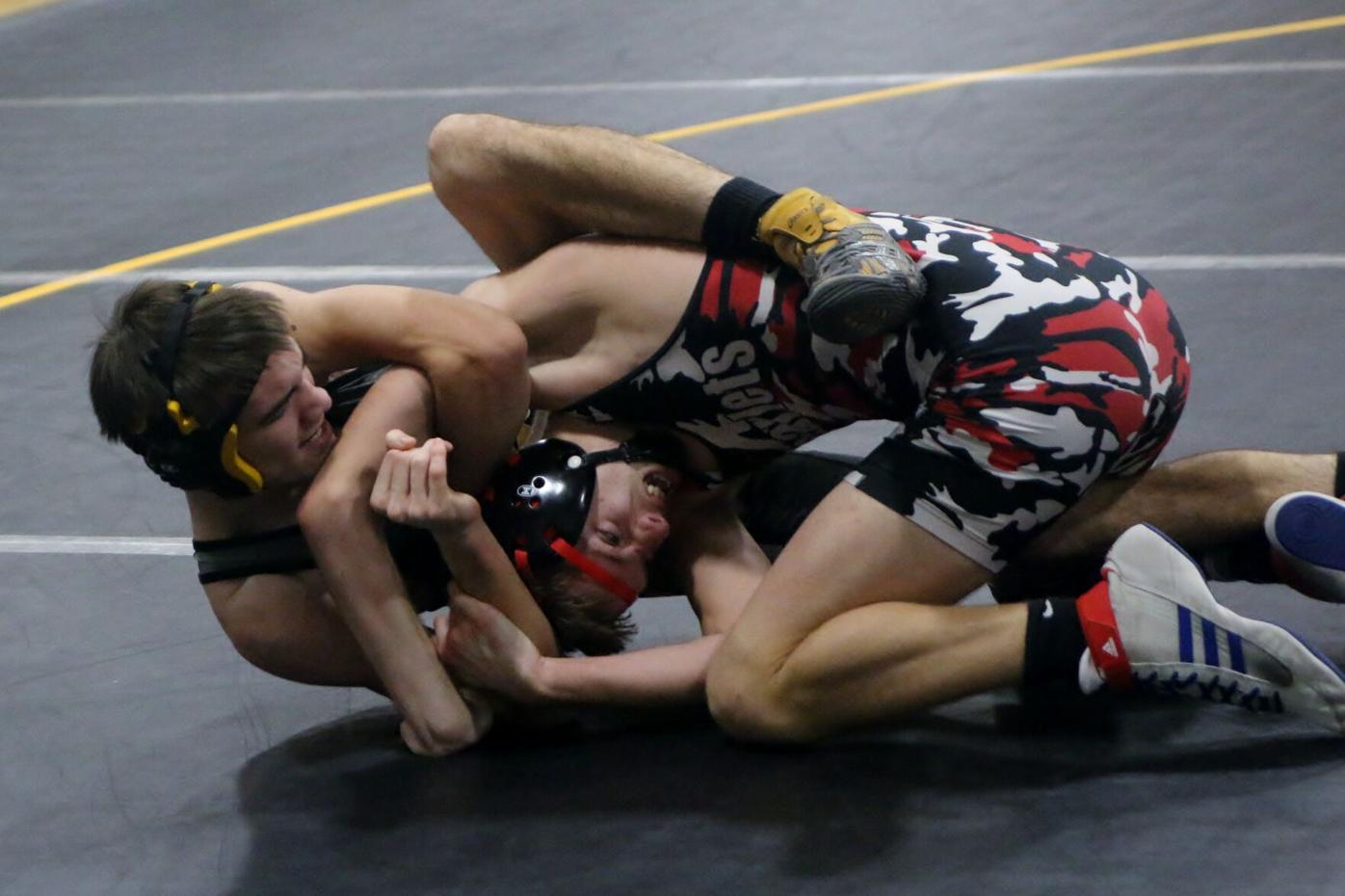 Eddyville-Blakesburg-Fremont sophomore Nathan Curry locks in the arms of Des Moines East junior Noah Beavers on the way to securing a second-period fall in a 138-pound match on Thursday afternoon during the Richard Lettington Family Duals in Eddyville. 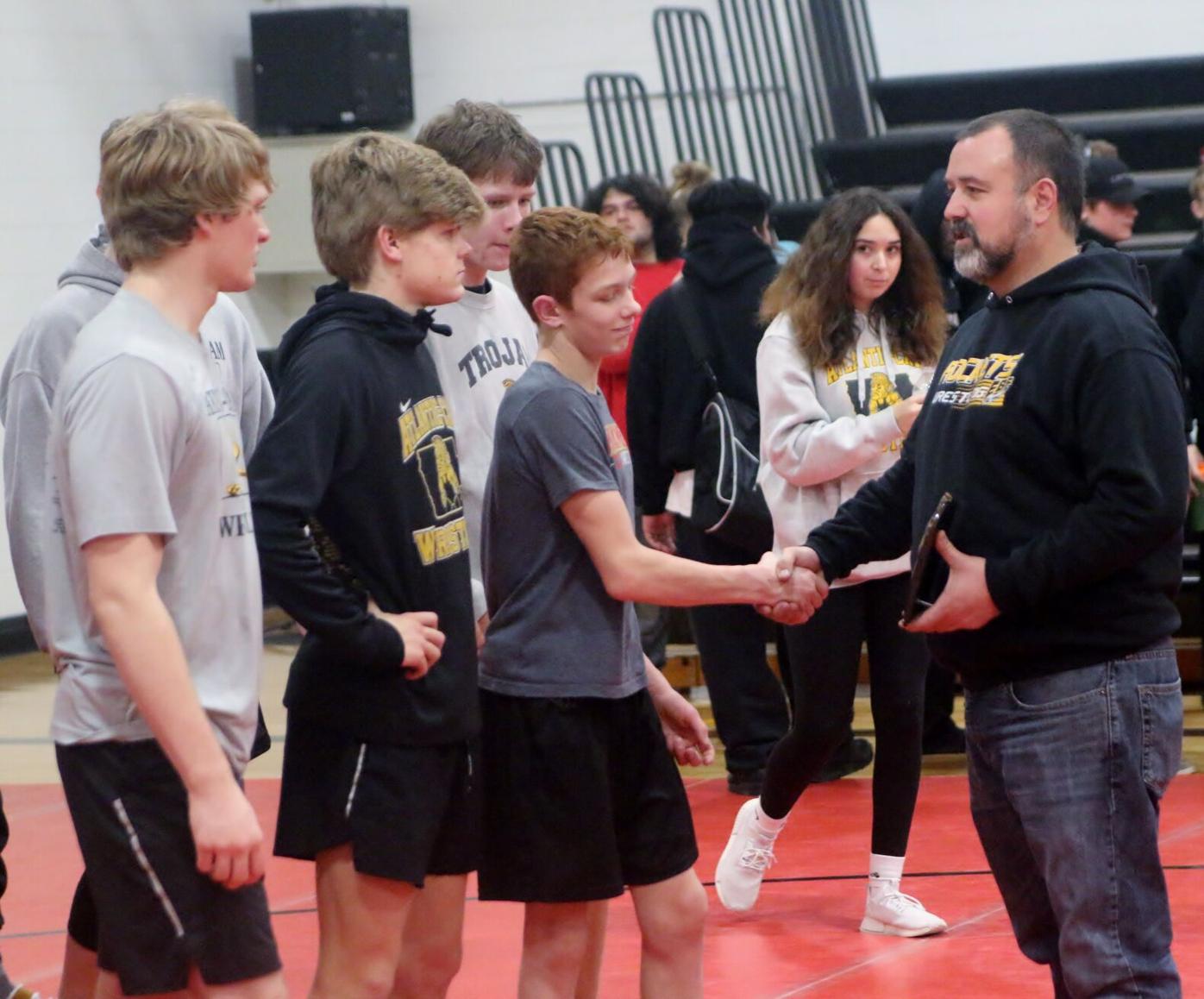 Richard Lettington (right) congratulates members of the Atlantic-CAM wrestling team before handing over the trophy for winning the team championship at the Lettington Family Duals on Thursday in Eddyville.

Eddyville-Blakesburg-Fremont senior Hunter McFadden controls Owen Hoover on the mat during EBF's dual with Atlantic-CAM on Thursday in Eddyville at the Richard Lettington Family Duals.

Eddyville-Blakesburg-Fremont sophomore Nathan Curry locks in the arms of Des Moines East junior Noah Beavers on the way to securing a second-period fall in a 138-pound match on Thursday afternoon during the Richard Lettington Family Duals in Eddyville.

Richard Lettington (right) congratulates members of the Atlantic-CAM wrestling team before handing over the trophy for winning the team championship at the Lettington Family Duals on Thursday in Eddyville.

The biggest goal, in fact, that any high school wrestler can have is on the mind of the Eddyville-Blakesburg-Fremont senior. McFadden improved to 11-0 on the season on Thursday with a pair of wins for the Rocket wrestling team during the Richard Lettington Family Duals, getting the Rockets started with an opening 11-3 major decision over Atlantic-CAM sophomore Owen Hoover before scoring a 15-0 tech fall over Des Moines East junior Demetrios Hilson.

"I feel like we're going all the way to state with that undefeated record," McFadden said. "My goal is to be an undefeated state champion. I just have to stay focused. You have to tell yourself that you're the best and keep that thought in your mind that no one can beat you. There's a difference between cockiness and being confident in yourself."

McFadden is making up for lost time, looking to finish his EBF wrestling career on a high note after taking last year off. As a sophomore, McFadden found himself in a similar situation sporting an unbeaten record midway through the season.

"I think I had won my first 15 matches that year, then I lost a couple of matches and my mindset just changed," McFadden said. "My mindset has totally changed since then. I went to a couple camps this past summer and put in the work to become a better wrestler.

"It was good to take a break. Everyone takes vacation time off work. I regret it a little bit, but it also made me realize what I missed out on last year and what I need to work more for this year."

McFadden scored the win in the first match of the Lettington Duals, topping Hoover 11-3 to put EBF ahead 4-0 against Atlantic-CAM. It would be the largest deficit the Trojans would face all day on their way to a successful defense of their team championship at the EBF tournament, rolling past the Rockets 66-13 before routing Waukee's junior varsity 72-9 and Des Moines East in the championship dual 66-9.

"We always enjoy coming here and getting to see some different teams," Atlantic-CAM head wrestling coach Tim Duff said. "We had a chance to get our teams come different matches and, hopefully, continue learn things as we move into the second half of the season."

Atlantic-CAM (9-3) was by far the dominant team against their three opponents in the Lettington Duals. Des Moines East, EBF and Waukee JV (1-4) each battled through three competitive duals with East (8-10) ultimately coming out on top 47-32 against the Warriors despite falling behind 20-0 before edging EBF, 40-38, thanks to fall scored by Daniel Zeoh at 152 pounds with just two matches remaining.

Trapper Hemm, however, pulled out the most exciting match of the day beating Armando Pacheco in a heavyweight thriller between the Rockets and East. After being forced into overtime after giving up a tying takedown with four seconds left in the third period, Hemm battled fatigue through the next 60 seconds trying to avoid allowing Pacheco to score the win in the first overtime period with takedown.

Pacheco, however, was also battling fatigue. The two heavyweights could not score on each other in the initial one-minute overtime period, sending the wrestlers into a pair of 30-second periods where each wrestler would start from the bottom.

Ultimately, Hemm would score a key takedown and near fall late in the first 30-second period, opening a 10-7 lead. Pacheco, trailing 10-8, was forced to look for a takedown to extend the match allowing Hemm to block the move and complete the 12-8 win taking down an exhausted Pacheco in the final seconds.

"At that point, I knew how tired both of us were. We were both pretty gassed by the end," Hemm said. "There wasn't much left from either of us when overtime started. I had tried a couple of things and couldn't get anything. I think I threw him and he landed weird on that first move. I couldn't really tell you. It was all on instinct at that point."

EBF (5-4) would finish the Lettington Duals securing third place with a 42-30 win over Waukee JV. Hemm added his third win of the day, pinning Alfred Gbenjen in 5:02, while Braxton Malloy (195), Stryker Lettington (220), Alex Garman (145) and Cayne Hall (152) all scored falls with Hall's pin at 1:53 against Bryce Hoskinson clinching EBF's fifth dual win of the season.

"We've had a very good first-half of the season," EBF head wrestling coach Scott Williamson said. "It gave us a chance to see what is the next step we need to take to be able to compete with the top teams in the state. Part of that is that we need to get our kids healthy. That'll be a huge difference for us.

"The kids that wrestled for us gave us 100 percent. There's no doubt we have more experience on the team this year. We have a lot more kids that have taken some lumps and have come on strong since last year. We're doing things the right way."

EBF will return to the mat for action after the holiday break in a quadrangular that will ultimately decide the South Central Conference dual championship. The Rockets will wrestle at Albia against the Blue Demons, seeking to add the dual title to their SCC tournament team championship won earlier this year, along with Chariton and Knoxville on Thursday, Jan. 6.