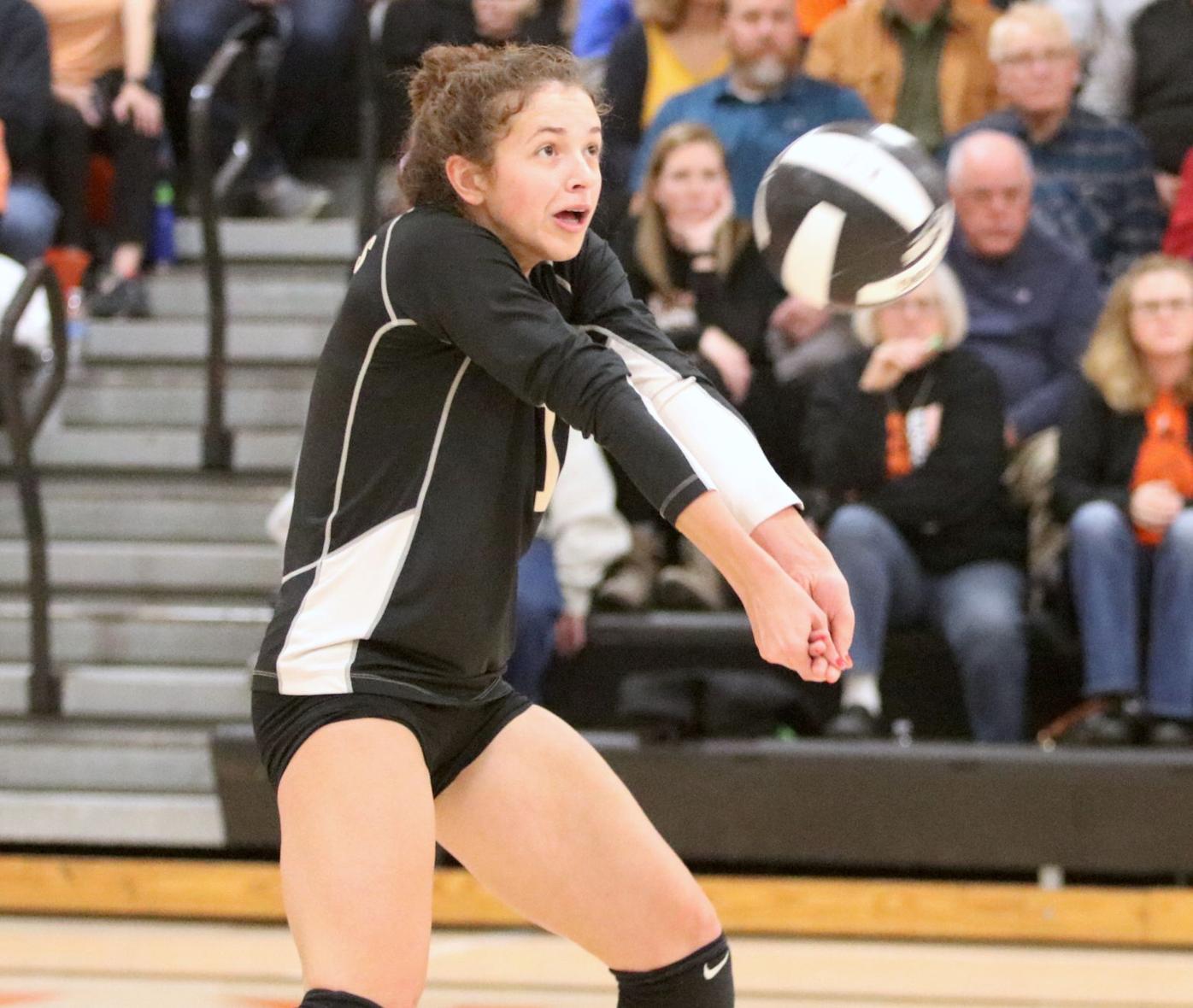 Van Buren County High School libero Isabel Manning receives a serve during the 2019 Class 2A regional final volleyball match against Pella Christian in Keosauqua. After helping lead the Warriors to the program’s first state tournament, Manning will be the senior leader on the court while her mother, Abby, will lead the way as the new head coach of the program. 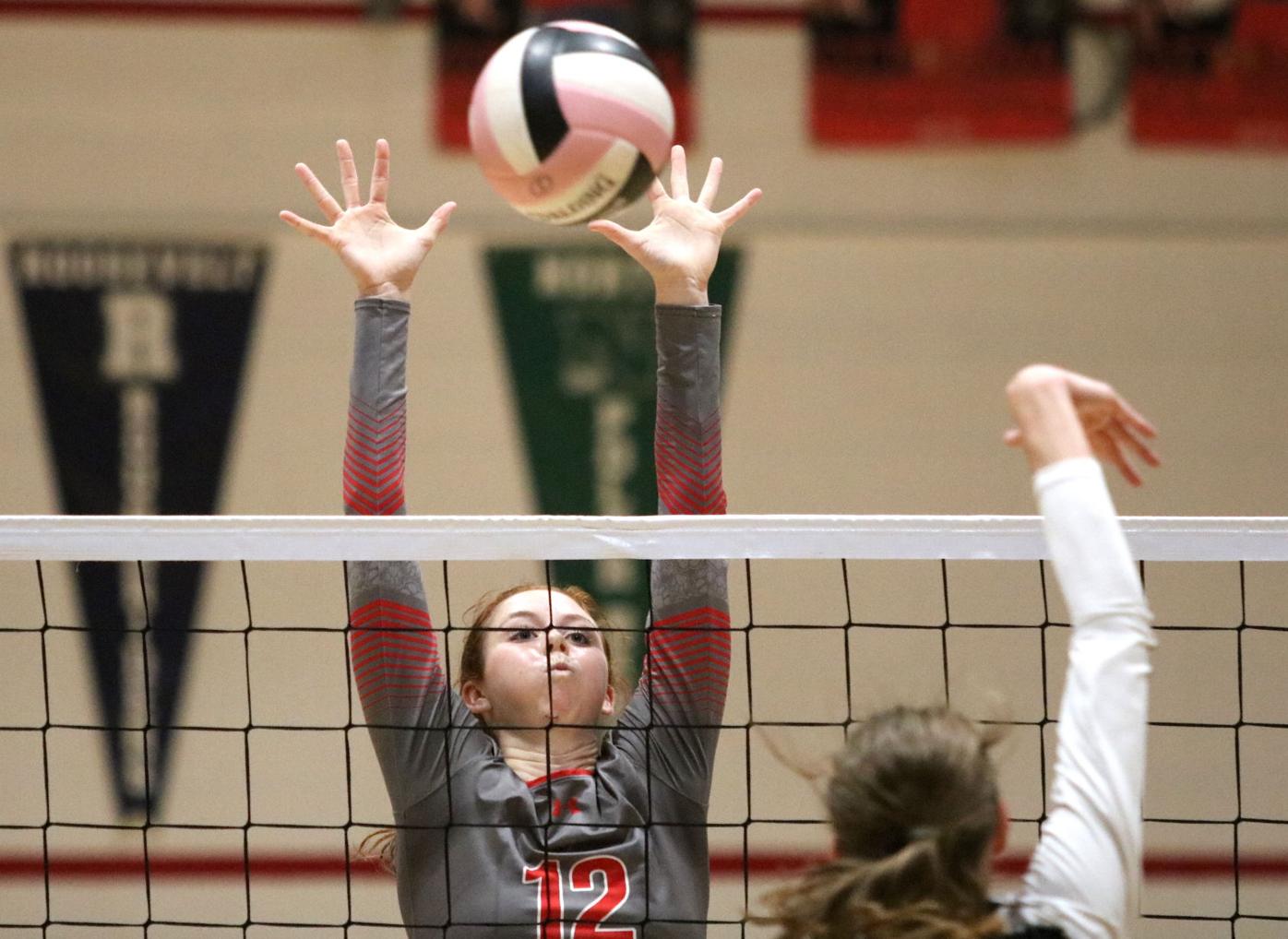 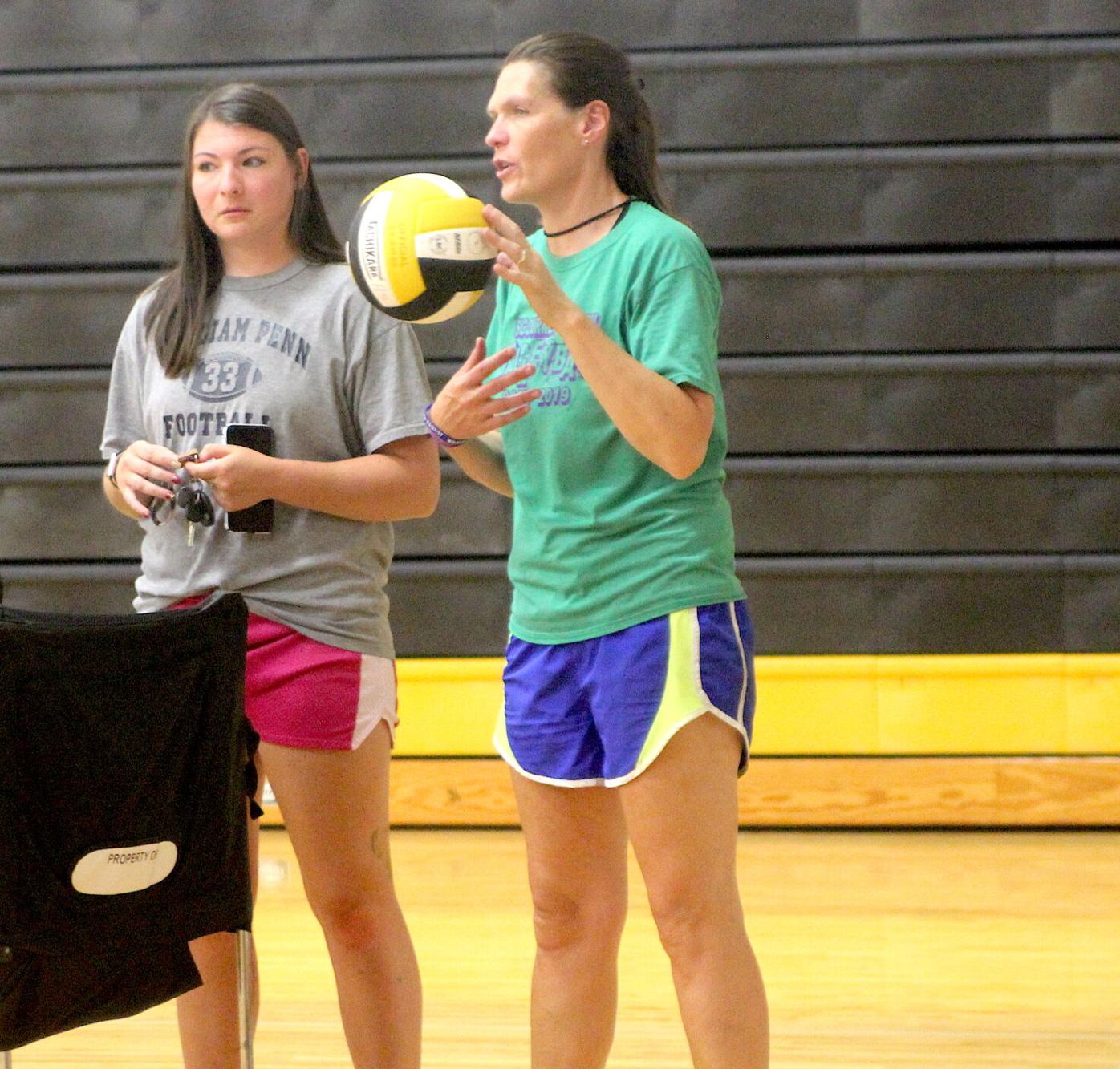 Chris Carter (right), helped by her daughter and former all-state standout Jordan (left), instructs members of the Sigourney High School volleyball team on Monday as Carter prepares for her 20th season as head coach of the Savages.

Van Buren County High School libero Isabel Manning receives a serve during the 2019 Class 2A regional final volleyball match against Pella Christian in Keosauqua. After helping lead the Warriors to the program’s first state tournament, Manning will be the senior leader on the court while her mother, Abby, will lead the way as the new head coach of the program.

Chris Carter (right), helped by her daughter and former all-state standout Jordan (left), instructs members of the Sigourney High School volleyball team on Monday as Carter prepares for her 20th season as head coach of the Savages.

OTTUMWA — The 2019 area high school volleyball season came to a historic end with Van Buren County making it to the state tournament for the first time.

The 2020 area high school volleyball season will have a historic beginning, simply for the fact that every team including the Warriors will be able to take the court.

Amid the ongoing coronavirus pandemic, teams are preparing to begin a season that will have some uncertainty surrounding it. Much like baseball and softball, the risk is that a possible COVID-19 outbreak could bring things to a sudden end well before the state tournament can be played.

General guidelines for high school volleyball this season includes the reading of a public address announcement at the start of each match to encourage social distancing (arm test) and to remind spectators to do their part in keeping their student-athletes on the court. People (players, coaches, officials, spectators, etc.) feeling sick or that have been exposed to someone sick, should not attend or participate in competitions or practices.

The IGHSAU strongly encourages all participants and spectators to practice social distancing and to wear face coverings whenever possible.

There will also be several pre-match procedures, from attendees for the coin toss being limited to one coach from each team and one captain from each team with all six individuals required to maintain social distance of 3-6 feet.

Teams are required to bring their own volleyballs to use for warm-ups for away matches with volleyballs that must be marked to help with identification purposes when traveling.

Those are just some of the changes in store for the upcoming volleyball season. There will still be multi-team tournaments that will be held throughout the course of the year, starting with the season-opening tournament hosted by Albia on Monday.

Outlook — Anne Guest is slated to complete four years as a starting hitter for the Ottumwa volleyball team, coming off a second straight season with over 200 kills, giving Guest 576 kills in three seasons. Emma Weilbrenner will also be looking for a third straight season with over 200 assists and will head into her senior season with 494 total assists in her OHS career. Weilbrenner, Guest and Kiley Heller each played over 100 sets last season while joining Ally Paris in playing in all 41 matches for the Bulldogs last season, giving OHS a huge experience edge going into the season.

Outlook — Albia lost a talented senior class from the previous season, which ultimately led the Lady Dees to consecutive trips to the regional finals. It will be in a rebuilding season this year, but Cox-Dustin is excited about the players that will be stepping into more leadership roles this season and running the helm. Albia will have new players at pretty much all the positions with the middles returning the most depth. Players have been working hard in the gym and know this season is going to be an unique season, according to Cox-Dustin.

“We are ready for the challenges we may face,” Cox-Dustin said.

Outlook — After graduating six starters from last year’s senior class, the Comets will have a lot of fresh faces this season. Cardinal has several key returners who played a big part in the offense last season. The Comets also return Lizzey Lett and Anna Mullikin as defensive specialists. Along with these returners, Riley Bears and Kinsey Hissem will be stepping into bigger roles this season.

“We are excited to get the chance to play this season, and are ready to get started,” said Katie Orwig, who takes over officially as head coach after serving as interim head coach at periods over the past two seasons.

Outlook — After taking the Centerville volleyball program to heights not seen in several decades just five years ago, when the Redettes finished 29-6 and came within a win of qualifying for the state volleyball tournament, Hill has been rebuilding with a senior class that has struggled through three consecutive losing seasons. This season could be much different, however, with six seniors and 14 upperclassmen looking to help Centerville get back in the hunt for the program’s second South Central Conference title in the past five seasons.

Outlook — In addition to a solid foundation of returners, Davis County will have several newcomers who will have to fill some key roles. The Mustangs have the potential to be pretty tough at the net and pretty solid all around. Davis County have several players who can play multiple positions and will have some depth on the bench this season.

“I’m expecting big contributions out of our returners,” Mason said. “We should do well in the South Central Conference.”

Outlook — EBF has a lot of changes, but has a lot of varsity experience. Genskow feels that EBF could get off to a rough start, but expects the Rockets to pick things up and get better as the year progresses because of players learning new positions and getting comfortable in those positions. Serving, work from Davis as the team’s returning libero, overall strong senior leadership and varsity experience with many players are the biggest strengths, according to Genskow, while blocking, setting and new positions for former varsity players are some of the areas EBF will have to improve on throughout the season.

Outlook — The Trojans will have some height this year, but the defense is going to need to step up and do some dirty work, according to Drish. New players will need to learn the fast-paced game in order to keep up.

“I believe our (Southeast) conference race should provide plenty of good matches between all of the teams,” Drish said. “This season, we all need to do our part to keep us safe and able to play utilizing our COVID-19 guidelines. This team will have to overcome the fact we are a young team, go out and play like we are determined, fierce and capable.”

Outlook — After serving as assistant coach each of the past two years, Helmick takes over as head coach of the Mohawks. Moravia has a strong senior presence with four returning starters and eight overall upperclassmen. The upcoming season looks bright for the Lady Mohawks.

Outlook — Second-team all-Bluegrass Conference selection Jessica King leads a group of five seniors that are slated to return to the court for the Eagles. While M-U may not have come out ahead on the scoreboard as much as they would have liked last year, the Eagles kept their heads up earning the Bluegrass Conference’s Sportsmanship Award for their effort in 2019.

Outlook — After coaching Pekin volleyball for 13 seasons, 12 as an assistant middle school coach and one year under Sara Lane as the varsity high school assistant coach, ‘Rusty’ Crabtree is taking over the reigns of the Panthers as varsity head coach this fall. Crabtree has been a part of 80 wins in 92 matches as a coach and takes over a program that has a lot of potential heading into 2020.

“There will be some changes and the athletes will need to adjust, but I have high hopes that they will and that we will have a great season,” Crabtree said. “I’m looking forward to the opportunity to coach these athletes and to help them to achieve their full potential.”

Outlook — Carter hopes her third decade at the helm of a program she was one of the first players of back in 1986 will see improvement with four seniors leading the Savages, including returning attacker Kaylee Weber and sophomore setter Brookelyn Hemsley. Madelynn Hornback also returns after leading Sigourney last season with 39 ace serves and 230 digs last fall.

Outlook — Coming off of last year’s first state appearance, we have one returning starter. This will be a year of new faces and rebuilding for the Warriors, including Abby Manning takes over a team that will feature her daughter, Isabel, as the top returning player.