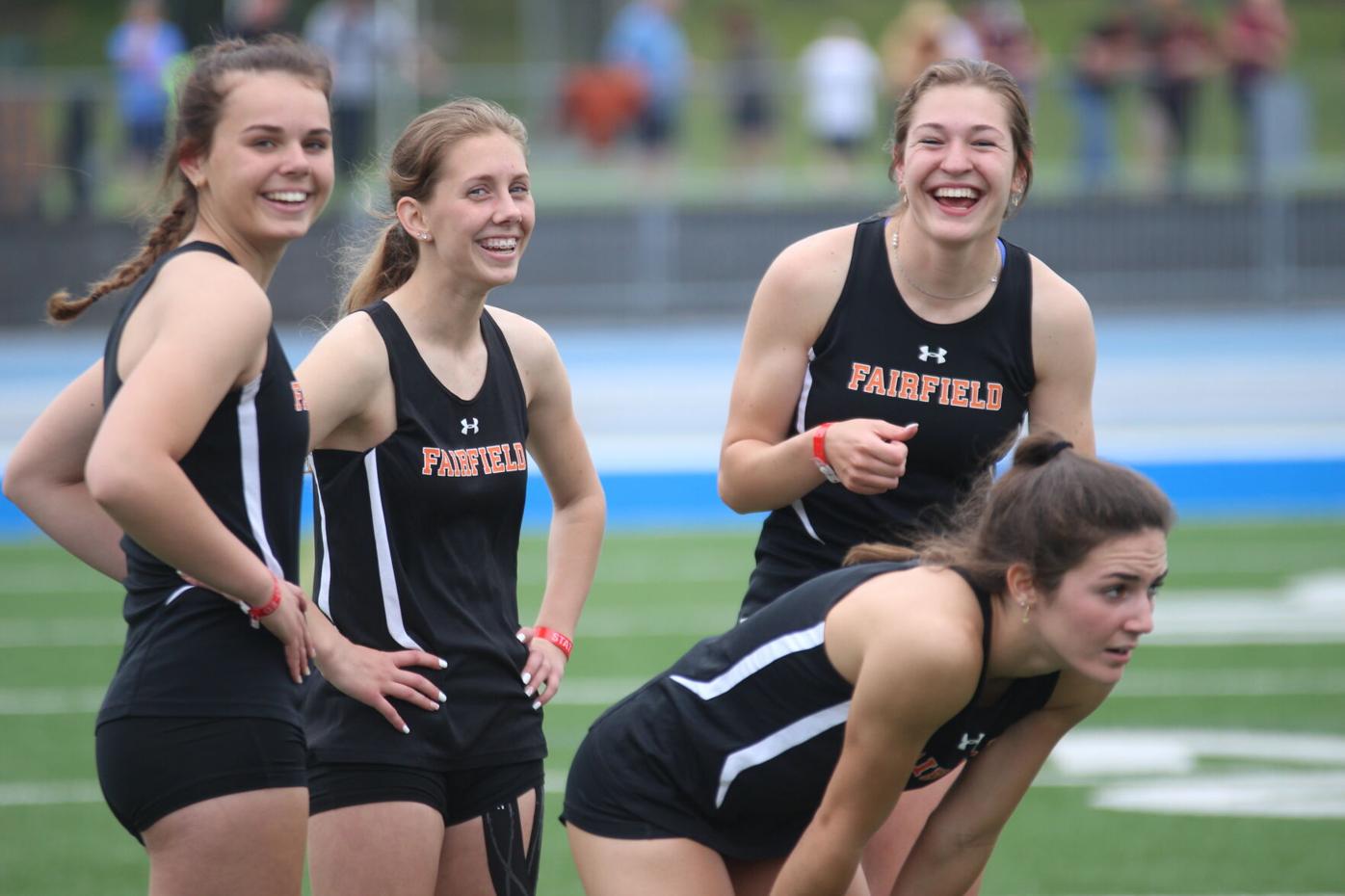 Fairfield teammates Brynley Allison, Maya Lane, Anna Dunlap and Kelsey Pacha had plenty to celebrate on Saturday morning at the Iowa High School State Track and Field championship meet after breaking their own school record, winning their heat and finishing third overall in the 3A girls shuttle hurdle relay at Drake Stadium in Des Moines. The Trojan teammates crossed the finish line in 1:07.35. 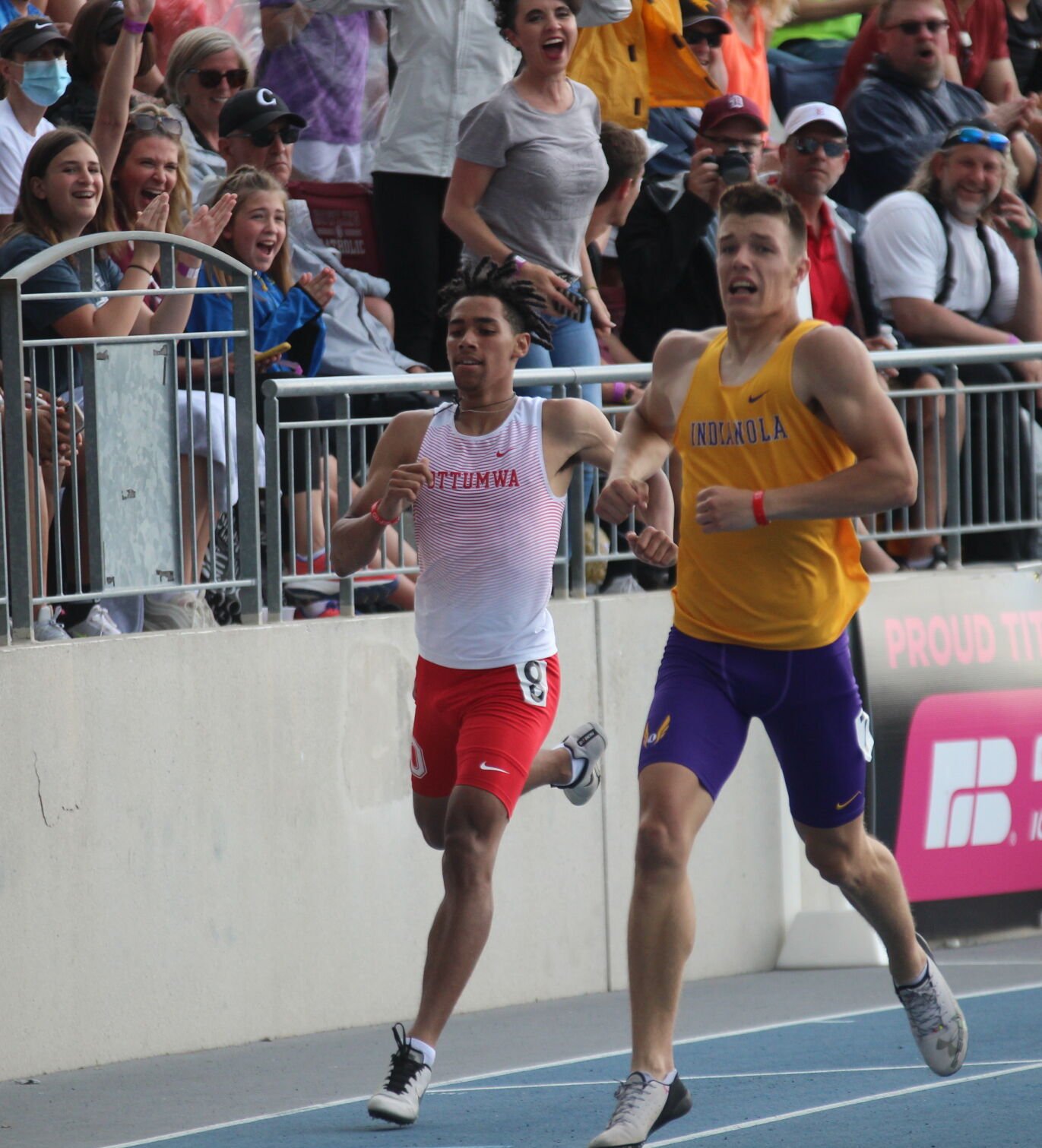 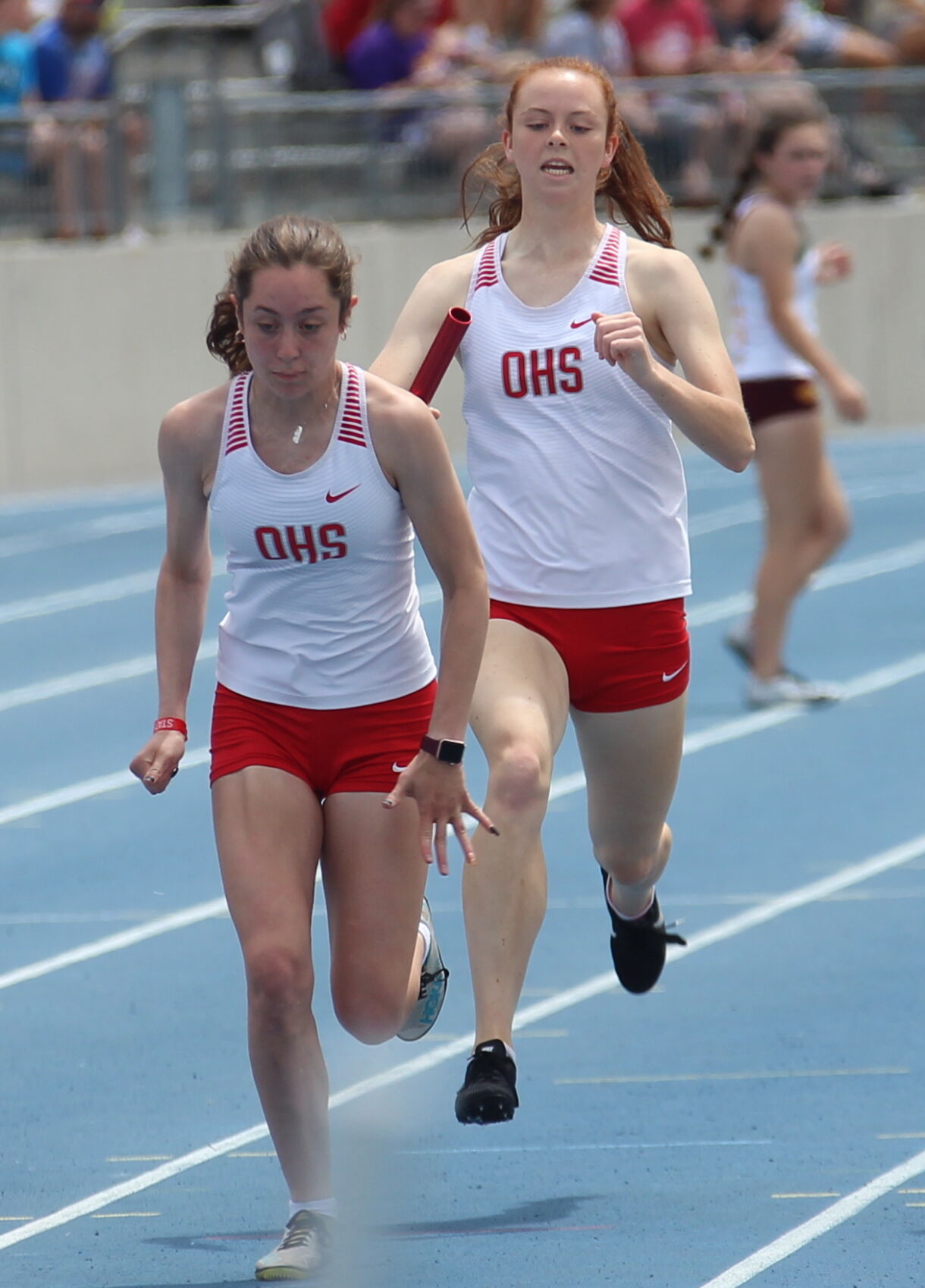 Ottumwa senior Anne Guest, running for the first time on the blue oval at Drake Stadium in Des Moines during the Iowa High School State Track and Field championship meet, prepares to hand off to Bulldog teammate Lina Newland during the Class 4A girls sprint medley relay.

Fairfield teammates Brynley Allison, Maya Lane, Anna Dunlap and Kelsey Pacha had plenty to celebrate on Saturday morning at the Iowa High School State Track and Field championship meet after breaking their own school record, winning their heat and finishing third overall in the 3A girls shuttle hurdle relay at Drake Stadium in Des Moines. The Trojan teammates crossed the finish line in 1:07.35.

Ottumwa senior Anne Guest, running for the first time on the blue oval at Drake Stadium in Des Moines during the Iowa High School State Track and Field championship meet, prepares to hand off to Bulldog teammate Lina Newland during the Class 4A girls sprint medley relay.

DES MOINES – The best is yet to come, perhaps, for the Fairfield High School girls track and field team.

The final day of the 2021 season, however, was pretty good for the Trojans. After not scoring a point in either of the first two days of the Iowa High School State Track and Field championship meet, Fairfield medaled in four events and racked up 20 points finishing 15th overall out of the 42 Class 3A female teams that scored points in the meet.

"We never really talked about numbers this season. When the season started, we were hoping to get our sprint medley and distance medley to place at state," Fairfield junior Anna Dunlap said. "We added the hurdles to our events and it ended up working really well. That ended up being a big surprise for our team."

Dunlap, who qualified for the 400-meter hurdles and distance medley relay as a freshman two years earlier, earned four state medals in the span of two hours on Saturday. First up came the shuttle hurdle relay, where Dunlap led off staking Fairfield to an early lead in the first of two heats.

Maya Lane and Brynley Allison kept Fairfield in front through the next two legs of the shuttle hurdle. Kelsey Pacha, who would compete in three races herself on Saturday, would clinch a school-record run of 1:07.35 by running away with a win in the heat, clinching a third-place finish in the 3A girls race.

"We just went out and knew we had to run as fast as we could because we were in the slower of the two heats," Pacha said. "It was really great to break our own school record and set a personal record for the season. It proved that we belonged here and it set the tone for the day.

"We came into the season knowing we would be a good team and we'd be able to qualify for state in a few events. I don't know if anyone thought we could make it this far, but it turned out to be a really fun season for everyone."

Dunlap was on her own for the 100-meter dash, racking up three more points for the Trojans by finishing fifth in 12.89 seconds. Pacha joined Dunlap for the 100-meter hurdles, a race the two have been pushing each in all season.

On Saturday, Dunlap was able to edge Pacha in the state championship race, securing another top-three finish by crossing the finish line third in 15.6 seconds. Pacha added a sixth-place run of 15.88 seconds for the Trojans, giving Fairfield 19 points in less than an hour of competition.

"I was in a good mood the whole time getting ready to run those two individual races after what we accomplished in the shuttle hurdle," Dunlap said. "My legs were starting to feel it by the 100-meter hurdles, but there was definitely an adrenaline rush that helped carry me through."

Dunlap's busy slate might have kept Fairfield from an even-higher finish in the 4x100 relay after qualifying with the fifth-fastest time on Friday. Running the anchor after competing in three championship races within a two-hour window, Dunlap was able to get Fairfield across the finish line in eighth place in 50.88 seconds getting the Trojans to 20 points for the state meet.

"It's unfortunate that the events had to get crammed in like this," Dunlap said. "I think we would have had better results if it was a little more spread out, but I'm still so happy with how it all turned out."

Dunlap and Mallory Lyon were the only athletes to return to state this year for the Fairfield girls after competing in the last state meet held back in 2019. In a season with hardly any expectations, the Trojans were able to claim a Southeast Conference championship, came within 17 points of a regional title and finished as one of Class 3A's top 15 teams with a squad of state qualifiers that will largely be returning next year hoping to put Fairfield in the mix for a state team trophy for the first time since finishing third back in 2006.

"We only lose one senior that runs," Dunlap said. "We have a pretty young team this year. Next year is going to be huge for us."

The Ottumwa boys track and field team also got a glimpse into the future later on Saturday, sending out an all-sophomore team to run in the Class 4A sprint medley relay. Cooper Derby, Luke Graeve, Brock Brinegar and Mason Farrington brought home a 20th-place finish in the race, producing a season-ending time of 1:37.16.

"The main thing the seniors this season told us was to stay calm and keep working hard," Farrington said. "They've been great leaders and motivators. I'm looking forward to the next two years. We're all going to grow together and push each other to be back here."

Charlie Welch, one of the seniors Farrington mentioned, was the last Ottumwa athlete to compete this season. Welch became the third overall Ottumwa track and field athlete (Jesus Jaime, Lina Newland) to medal at state this season, bringing home Ottumwa's highest overall finish in any event by placing fifth in the 4A boys 200-meter dash in 22.37 seconds, clinching a 20th-place finish for the Bulldogs with 10 team points, the most scored by any CIML Metro conference team.

"I would not have believed you at the beginning of the season if you would have told me I'd be standing here today winning a state medal," Welch said. "I was not in the best shape at the beginning of the season. I didn't think I could do it, but (OHS head boys track and field coach) John (Lawrence) has been cracking down on us. So has (assistant coach) David (Bossou). They've been really warming us up and preparing for this meet. I think they did a really good job doing that."

The Ottumwa girls closed out the season with only final run, finishing 23rd in the 4A girls sprint medley. Anne Guest, a three-time state qualifier in the high jump, made her one and only run on the blue oval of Drake Stadium for the Bulldogs running the second leg of the race joining Madelyn Houk, Newland and fellow senior Chloe Schneckloth in producing a time of 1:55.07, good for 23rd place.

"It was so weird being out there on the track. It's crazy. You feel faster than what you normally feel like for a race," Guest said. "That track is so nice to run on. I'm glad I got the chance to experience it. I felt super confident and felt like I was just flying."

"I know my teammates are a little weirded out when I go and talk to the guys from the other schools during meets," Shively said. "They're my friends. We're teammates. We swim together. It shows the great athletic talent that (swimming) program has produced."

Pekin senior Brady Millikin closed out his stellar running career for the Panthers by collecting his seventh state track medal, including his second this season, by finishing fifth in the 2A boys 1,600-meter run. Like his all-state run in the boys state cross-country meet this past fall, Millikin held nothing back in his final high school state run on the track setting a personal-best in the one-mile race by crossing the finish line in 4:25.97.

"My goal was to hit 4:26 at the beginning of the season and I finally got it," Millikin said. "Being able to finish out my final high school race like is really amazing. I accomplished my goal and ran as hard as I could. I knew I'd be regretting it my whole life if I didn't go all out and give it everything I had in the end."

MONTGOMERY [mdash] On Monday, September, 13, 2021, Melvin Lee Roy Johnson passed away at the age of 81 following a long battle with cancer. Melvin was preceded in death by his wife of 37 years, Patsy Ann Johnson, who passed away February 29, 2004. He is survived by wife of 14 years, Joyce Th…