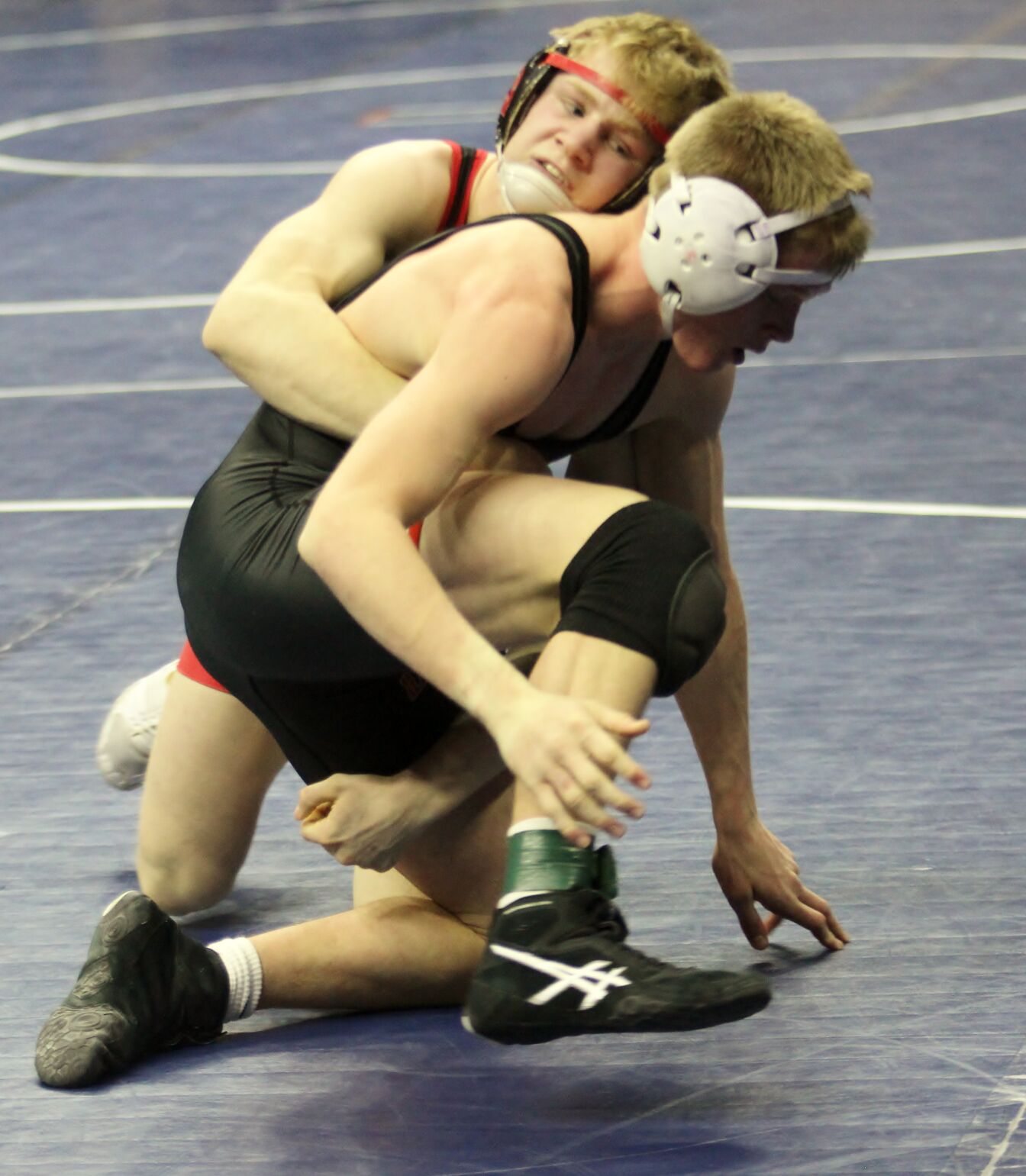 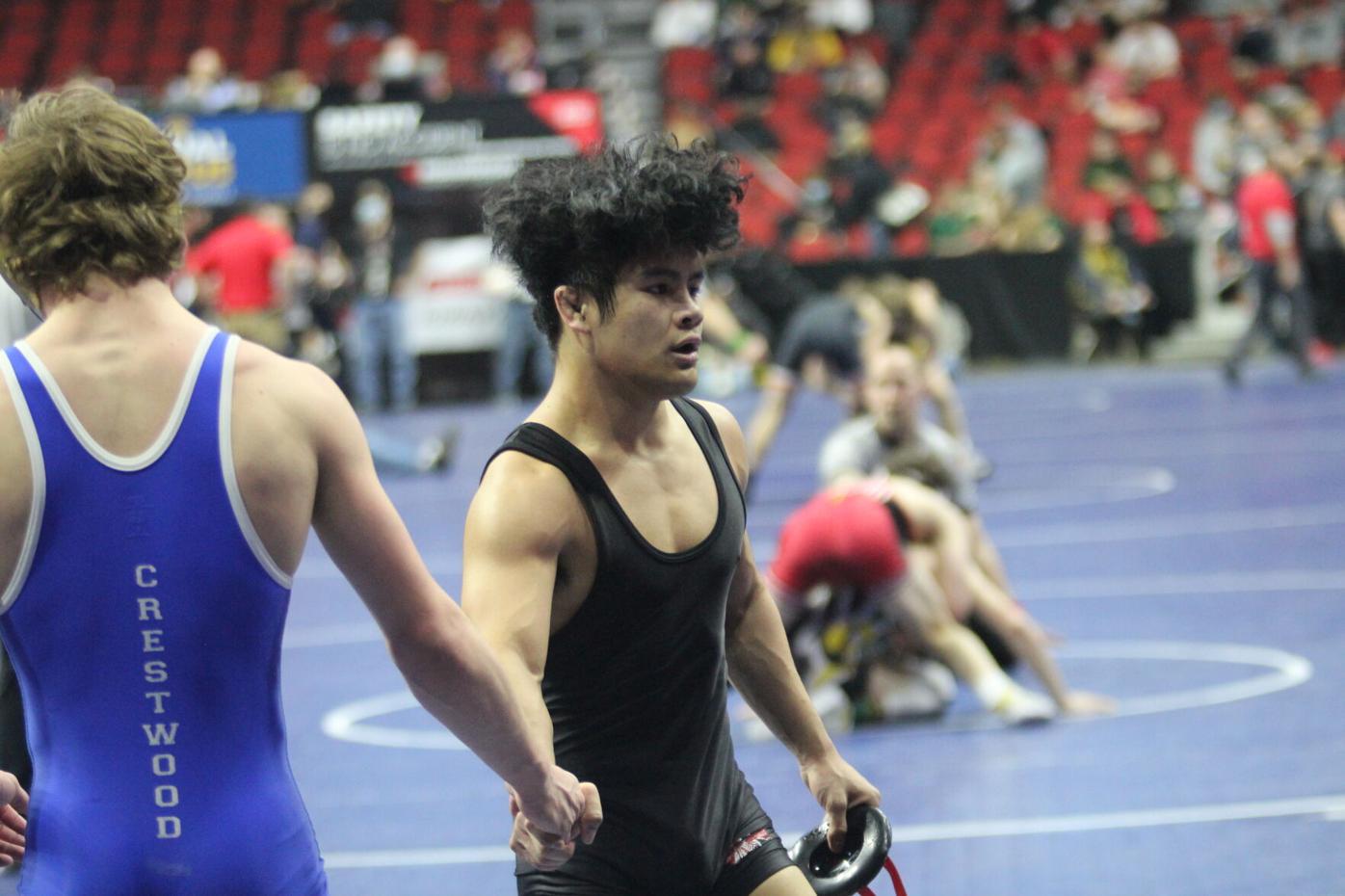 Centerville senior Nathaniel Genobana shakes the hand of Crestwood, Cresco sophomore Chase Thomas after a thrilling 3-1 win in the 138-pound Class 2A state wrestling tournament quarterfinals on Friday at Wells Fargo Arena in Des Moines. Genobana will compete in the state championship match for the fourth straight year, facing the top seed in his bracket for the fourth straight year while seeking to win his first state title on Saturday.

Centerville senior Nathaniel Genobana shakes the hand of Crestwood, Cresco sophomore Chase Thomas after a thrilling 3-1 win in the 138-pound Class 2A state wrestling tournament quarterfinals on Friday at Wells Fargo Arena in Des Moines. Genobana will compete in the state championship match for the fourth straight year, facing the top seed in his bracket for the fourth straight year while seeking to win his first state title on Saturday.

His face, however, is another story.

Aside from a stoppage to clean up a scrape on the bridge of his nose, there was no stopping Lewis from moving within two wins of history on Friday against West Delaware sophomore Logan Peyton. Lewis polished off a 6-0 win moments after Centerville teammate Nathaniel Genobana's thrilling 3-1 win late in regulation against Crestwood sophomore Chase Thomas, sending the Big Red senior teammates on to the state tournament semifinals in Class 2A for the second straight season.

"I feel like things are going good. I could have been a little quicker on my attacks and could have pushed the pace to be a little faster, but overall it went well," Lewis said after his 145-pound quarterfinal win. "A win is a win. I'll take it whether it's 6-0 or 1-0. A win's a win at state."

Lewis put that theory to the test on Friday night, winning by a single point over Decorah senior Jackson Rolfs in the state semifinals. Lewis scored a reversal late in the first period to counter an initial takedown by Rolfs, then escaped from the bottom with 12 seconds left in the second period before riding out Rolfs in the third, putting the Centerville senior one win away from becoming the 29th all-time wrestler to win four Iowa High School state championships.

"I think about it, but I try not to let it overwhelm me too much," Lewis said. "For me, this arena has been like my home. I've been coming here to wrestle since I was 6 or 7-years-old. I'm probably going to miss it when I wrestle my last match here, but I'm trying to stay focused on the next match."

That next match, with history on the line, comes Saturday night in the 145-pound 2A final. Lewis (36-4) goes up against Osage sophomore Nick Fox (34-2) in what will surely be one of the most highly anticipated matches of the final round session.

"It's weighed on me, but I still have a job to get done," Lewis said. "It's still one match away."

For the fourth straight year, Lewis will share the championship stage at state with Genobana who is back in the state finals for the fourth straight year going the distance twice earning an 8-4 win in the 138-pound 2A semifinals over Vinton-Shellsburg junior Brady Ortner. After falling to the top seed in three straight state championship matches, Genobana (45-3) has one more chance to earn that elusive final win Saturday again facing a top seed with 39-1 Independence junior Isaiah Weber presenting a final, very familiar hurdle.

"I feel good about it," Genobana said. "It's all about being in the right mindset, and I feel great."

Ottumwa junior teammates Corbin Grace both bounced back from quarterfinal-round losses in Class 3A, each earning one-point wins in postseason rematches with Ankeny teammates J.J. Maihan and Nate Nessa. Grace avenged a tough 6-4 loss to Maihan in last week's regional dual tournament, earning a 1-0 win to place at 113 pounds while Summers rode out Nessa in the third period to hold on for a 3-2 win nine days after pinning the Ankeny junior at 170 pounds.

"The last time I wrestled him, he put himself in a bad position and I was able to get him on his back," Summers said. "I was leading the match 2-0 going into the second period. He's really strong, especially on bottom. It's hard to get your move in and get him to work."

Grace, meanwhile, reversed roles with Maihan after a third-period penalty point and an equipment penalty hampered the Ottumwa junior in a narrow loss to Maihan in the regional duals. On Friday, with his season on the line, Grace preserved a scoreless tie through two periods before being allowed to start the third period on his feet as Maihan chose to give up the first point rather than try to ride out Grace throughout the final period.

After having to chase a potential tying take down in the third period nine days earlier, it was Grace that was able to protect a late lead on Friday. Maihan attempted several times to shoot in for the winning takedown, only to be blocked by Grace clinching a place on the podium for the first-time state qualifier.

"This is probably the biggest match I've wrestled in. This is the blood round. You win and you place. You lose and you go home," Grace said. "I had to wrestle my best to win this match. I was pumped up. I had to beat that kid. I knew he wasn't better than me."

Besides his skill on the mat, Grace made sure there was no way a win over Maihan could be taken away on Friday.

"I made sure this time I didn't lock his arm when I slammed him this time," Grace joked. "We've also got tape around my shoes to make sure they wouldn't come untied this time."

Pekin senior Mason Juhl became the first area wrestler to officially clinch a place on the podium at this year's state wrestling tournament. The all-time winningest Panther wrestler secured his 42nd win this season and 149th win in four years, but pinning South Hamilton junior Brent Greenfield, shaking off an early take down to work his way to finally placing for the first time in two trips to the state wrestling tournament.

"As soon as he hipped over and I could get him on his back, all I thought about was here we go. It's time to make this happen," Juhl said. "It's a good feeling, but I'm not done yet. I'm glad to place, but I want to place as high as I possibly can."

Juhl will have one more match in his high school career with a chance to finish seventh in Class 1A at 182 pounds after an 8-4 loss on Friday evening to Woodbury Central senior Ty Dennison. Juhl will wrestle Collins-Maxwell freshman Brody Sampson on Saturday seeking a milestone 150th career win.

CLASS 2A SECOND ROUND CONSOLATIONS

CLASS 1A SECOND ROUND CONSOLATIONS