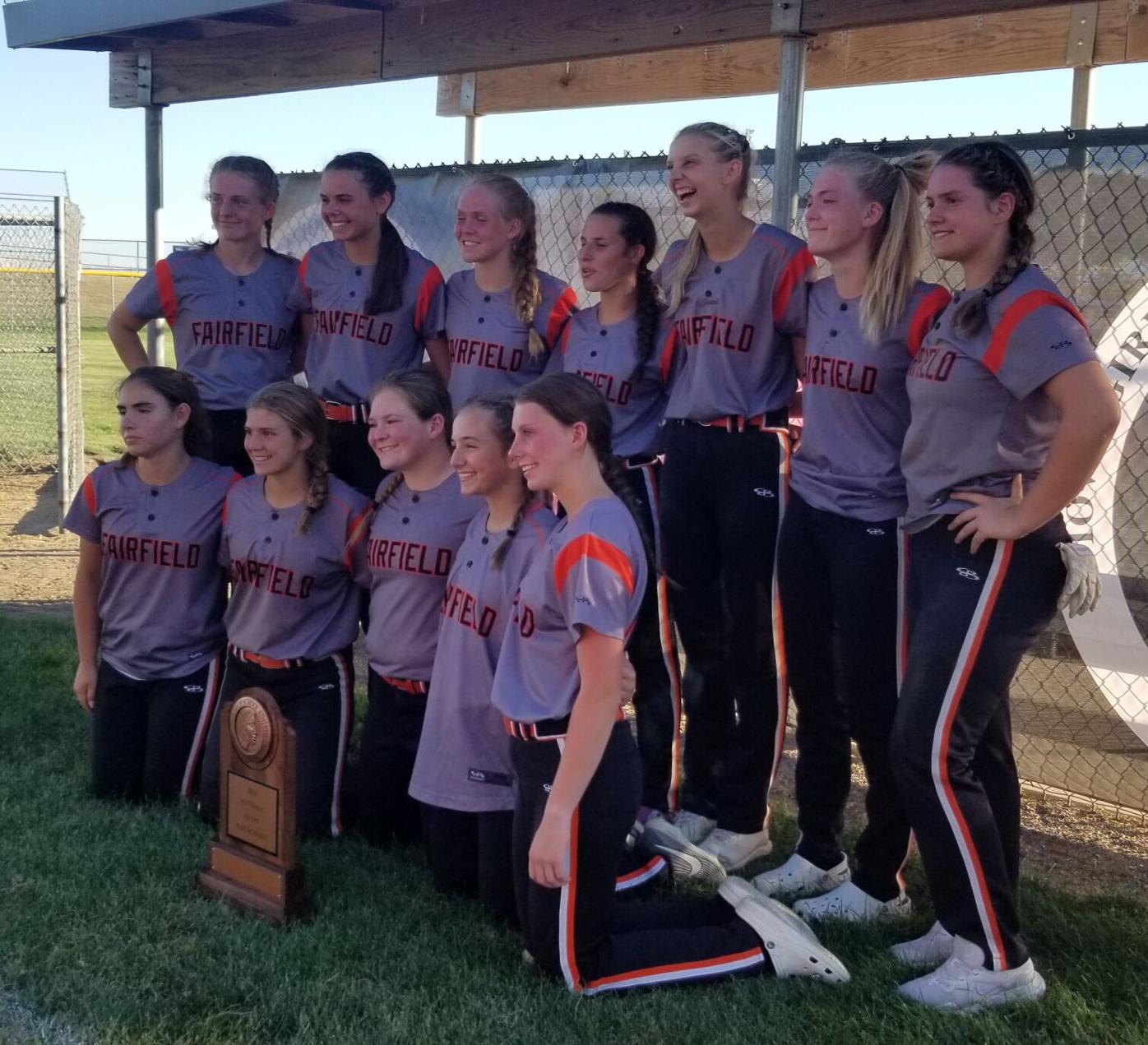 The Fairfield High School softball team celebrated with their state tournament trophy on Monday at the Harlan and Hazel Rogers Sports Complex in Fort Dodge. 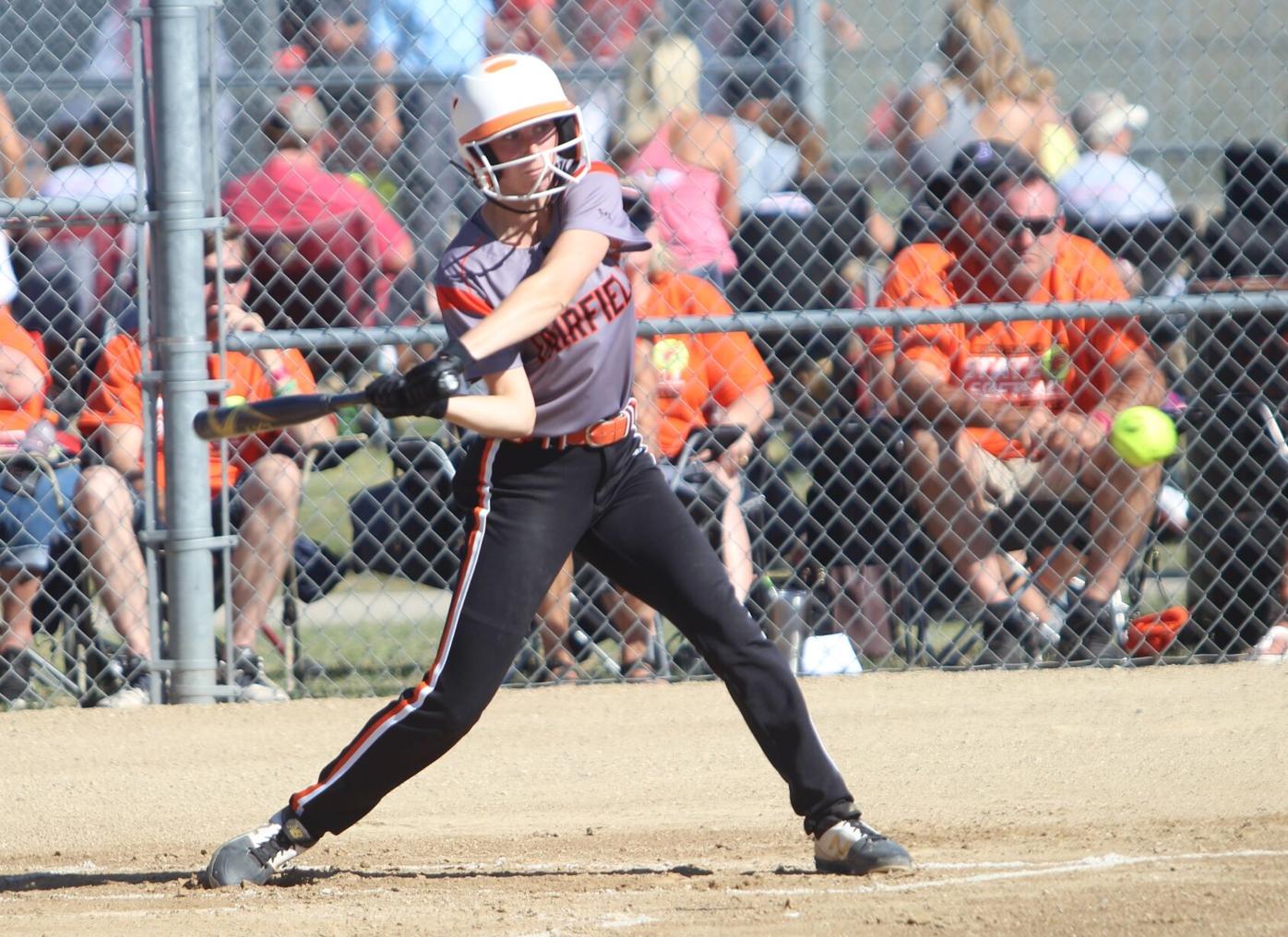 Allison Rebling sets her sights on a pitch at the plate for the Fairfield High School softball team on Monday.

The Fairfield High School softball team celebrated with their state tournament trophy on Monday at the Harlan and Hazel Rogers Sports Complex in Fort Dodge.

Allison Rebling sets her sights on a pitch at the plate for the Fairfield High School softball team on Monday.

Just ask Hannah Simpson, who collected two hits including a double and drove in two runs in her state tournament debut for the Trojans on Monday. The sophomore first baseman can see herself accomplishing the same feats the players that once wore the black and orange Fairfield softball uniforms.

“I’ve always wanted to be like Kaylee Watson and be that home run hitter,” Simpson said, referring to one of several talented Fairfield players that were part of three straight tournament trips from 2015-17. “I look back on that team and I think we’re a lot like that. We’ve got Jenna (Norris) and me as power hitters, just like Kaylee and Sara Trent were. Danielle (Breen) has a great batting average. She’s improved so much from last year.

“Everyone’s been stepping up and making contact. That’s all that matters. We cut our strikeouts in half from last year, which is amazing. Everyone has stepped up their game.”

Fairfield’s first of three straight state tournament trips with stars like Watson, Trent, Kenady Waugh, Alli Deao, Haley Beard and Ashtyn Drish ended with a tough loss to Dallas Center-Grimes in 2015. While there was much more offense and far fewer innings than that 1-0 loss in 12 innings five years ago, the current Fairfield softball team hopes to build on Monday’s 7-5 loss to the Fillies in a game that saw the Trojans come up one big hit short of advancing to the state semifinals.

The 2015 Fairfield softball team would find those big hits the following year, rallying for a win at Keokuk to secure a memorable regional championship at Joyce Park before advancing to the Class 4A state semifinals on the way to a third-place finish. The Trojans will return six starters, many of whom have played since their eighth-grade seasons and many of whom will be around for the next two seasons.

“I don’t know if it was set up like that on purpose, but it would have been nice to prove some people wrong this season,” Simpson said. “You can’t look back on it. You can’t fix it. All you can do is move forward and go get it next time.”

Bob Bradfield wrapped up his 41st season at helm of the Fairfield softball team. The Trojans took full advantage of the season they were able to have despite the ongoing coronavirus pandemic that caused the season to be shortened, starting with the first practices on June 1. After losing the third game of the season at Albia, 1-0, Fairfield went on a 22-game winning streak that carried the Trojans to a 24-2 season and the first state tournament since 2017.

“At the beginning of the season, with the way everything was going, we didn’t even know if we’d have a season,” said Bradfield, now 1,041-652 (.615) in 41 seasons leading the Fairfield softball program. “We knew we were going to have a good team. Did I think we were going to go 24-2? I probably wouldn’t have guessed that. We didn’t see as many teams because we didn’t have as many tournaments. Still, to have only two losses this season was probably a bit of a surprise.”

There are other similarities that the current core of the Fairfield softball team shares with those that led the Trojans to state to the three consecutive state tournaments half-a-decade earlier. One is that the current Trojans will have to try and return to state while losing a top-flight upperclassmen in the pitching circle.

After being led to fifth and third-place state tournament finishes in 2015 and 2016 by Deao, Beard stepped in to guide the Trojans back to state in 2017. Coty Engle will be counted on to step in as the top pitcher moving forward for Fairfield starting next season after going 11-0 as the second starting pitcher behind senior Allison Rebling, who set the tone for the Trojans throughout her senior season.

“Coty is a great athlete and a great hitter. We just need her to work hard in the gym in the offseason and take over that No. 1 pitching spot,” Bradfield said. “The No. 2 pitching spot is also going to be something of a question mark. Pitching will be the key for this team.

“To get back to the state tournament, we need Coty to establish herself as a solid top pitcher. She hasn’t had to strike out 10 batters or hold someone down to a run or two a game. We have potential to come back up here. There’s no doubt about that.”

Being involved in just one state tournament game, for Simpson, is motivation enough to work even harder to be back at the Harlan and Hazel Rogers Sports Complex next summer. It’s something she hopes every current and future Fairfield softball player will take to heart.

“This is something not a lot of kids get to experience,” Simpson said. “You just have to be able to take it or leave it. Words cannot explain what it was like to be in the middle of this. There were huge crowds everywhere. For every kid that wants to work hard throughout the offseason, do it because you’ll love this. The experience is awesome.”