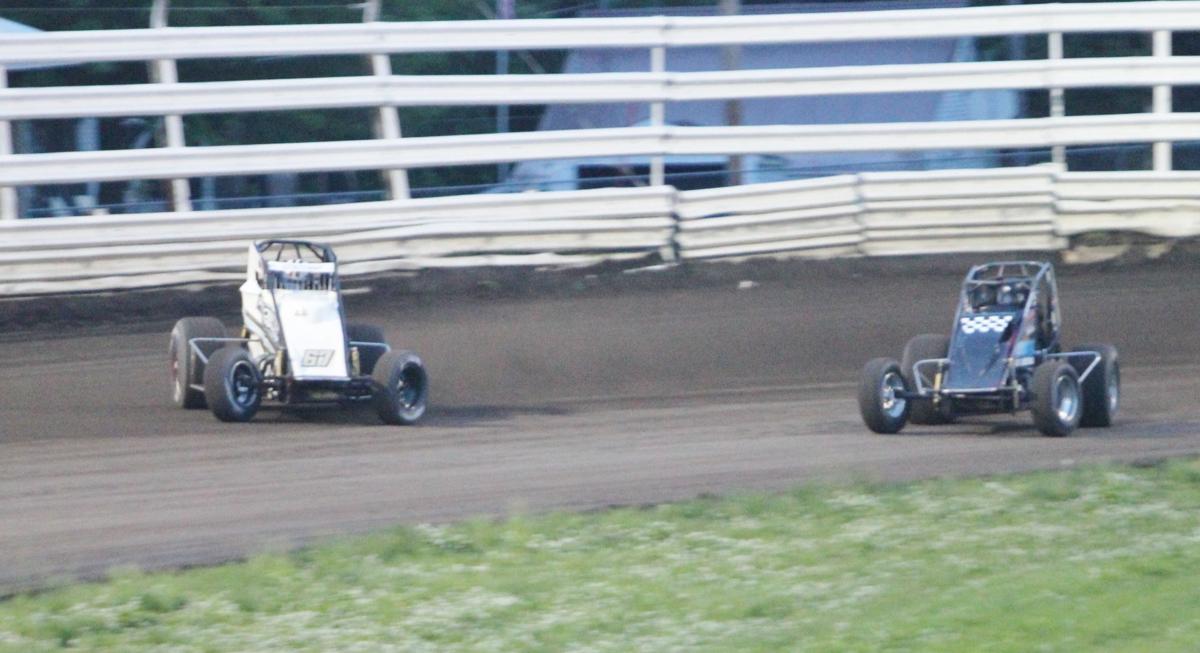 Knoxville native Jonathan Hughes swings way up to the high side of the track at the Southern Iowa Speedway in Oskaloosa on Wednesday night while battling with Newton native Ben Woods for the non-winged sprint car win. 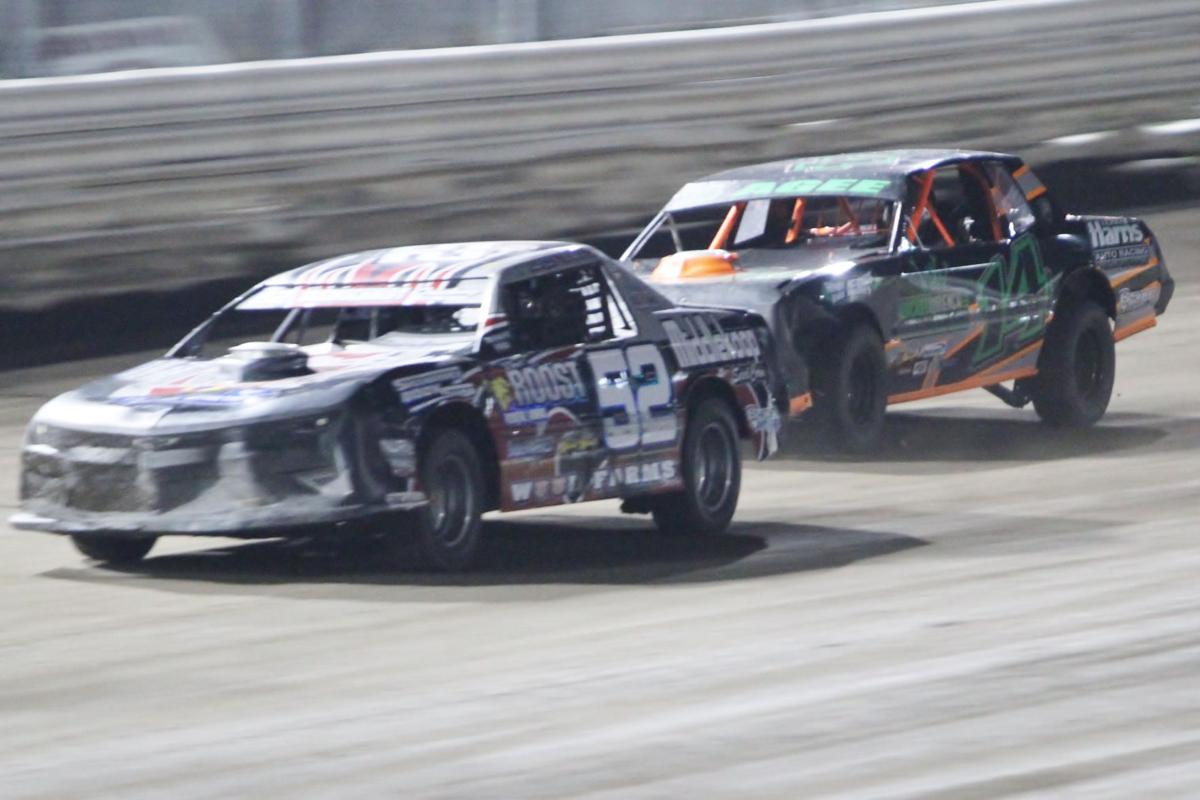 Knoxville native Jonathan Hughes swings way up to the high side of the track at the Southern Iowa Speedway in Oskaloosa on Wednesday night while battling with Newton native Ben Woods for the non-winged sprint car win.

OSKALOOSA — After 16 years away from victory lane, Rick VanDusseldorp had the checked flag in sight Wednesday night at the Southern Iowa Speedway.

Leading the Parker Tree Service Hobby Stock 14-lap feature by a comfortable margin with three laps to go, VanDusseldorp saw another flag wave instead. The yellow caution flag brought the field back together and required the Oskaloosa native to hold off several drivers in order to finally make it back to victory lane.

“I was looking for the white flag and the checkered flag for what seemed like an eternity,” VanDusseldorp said. “Of course, when that caution comes out, you start thinking if it’s really going to be your night.

VanDusseldorp held off Christian Huffman and Jadyn Stevens over the final three laps, clinching his first victory at his home track since 2004. The second week of racing at Southern Iowa Speedway marked another elated Hobby Stock winner after Bussey native Brad Stephens overcame an early wreck and a tire replacement to come from the back of a 15-car field in less than 14 laps to win last week’s race.

On Thursday, it was VanDusseldorp who relished the Hobby Stock triumph. Having raced off and on for 27 years, VanDusseldorp placed third in last week’s season opener, making him the only Hobby Stock driver to place in the top three both weeks at SIS.

“They say it, and it’s true, that Oskaloosa has one of the hardest tracks to win at that you’ll ever come to,” VanDusseldorp said. “It’s always fast. You get good competition. You have to feel fortunate to get a victory over here.”

The second week of racing at SIS featured a pair of hometown winners. Curtis Vanderwal took off from a front row start and was never challenged on his way to an impressive win in the Oskaloosa Quality Rental Sportmod feature, bouncing back from last week’s 12th-place showing. Colton Livezy made a late race charge to finish second.

“It’s never easy to win here no matter how it might look. Last week, we had a fuel pump go bad. We tried everything we could to fix it and we couldn’t do anything with it until we changed it,” Vanderwal said. “It took a lot of hard work in the shop to run as well as we did. It’s too bad we couldn’t truly find out until this week just how much the hard work we put in over the winter has paid off, but it looks like we’ve made some good changes.”

“It’s pretty exciting to have that first feature win. I don’t really know what to say,” Cain said after his second straight top-five finish at SIS. “It’s probably the best car I’ve had. It turned good, it handled the corners good. I have no complaints with the car at all.”

There were two familiar names back in victory lane at SIS on Wednesday. Both Jonathan Hughes and Nathan Wood went from flag-to-flag season-opening triumphs last week to late-lap comebacks and narrow margins of victory on week two at the Southern Iowa Fairgrounds.

Newton native Ben Woods was looking to duplicate the wire-to-wire efforts of Hughes the previous week in the Non Wing Sprint Car class, taking off from the pole and leading almost every lap of the caution-free race. Hughes chipped away at the lead of Woods, closing the gap with just two laps left leading to a battle that saw Hughes twice slide to the high side of the track before finally completing the pass for the win through turns three and four.

“The last lap always matters. That’s the one that pays,” Hughes said. “I raced against Ben last year at Knoxville in the 360s. It was great to see him come out and compete. He’s really fast. I had a blast. We were fist-bumping back at our trailers. That was a fun race to run.”

Two more drivers with a friendship off the track provided one last thrilling race on it as Wood edged Moberly, Missouri native Derrick Agee to win the Mid State Machine Stock Car feature on Wednesday. Agee led from the start of the 16-lap final while Wood had to battle just to get in position challenge for the win, starting on the outside of row two.

After finally getting by Jason McDanel for second place, Wood set his sights on Agee. The door finally opened as Agee went high coming out of turn four, allowing Wood to power ahead with three laps remaining.

“I didn’t think I had anything for him when the race began,” Wood said. “As the race went on, and I finally got to second place, I had some open track to run my car a little harder. I caught up to him, he messed up one time and that was it.”

Agee wouldn’t go away, nearly taking the lead back including on the final lap as Wood left the door open for a move to the inside. Agee got to the inside of Wood’s fender, but refused to force his way to the lead with a move that might have taken his friend out of the race.

“I wasn’t going to rough him up to get it done,” Agee said. “We’re too good of friends for that.”

Agee got one more chance in the final turn, moving right next to Wood for a drag race to the finish. In the end, the Sigourney native held on, making it 2-2 in stock car wins this season at SIS.

“I messed up a couple of times. I’m lucky he didn’t get me back,” Wood said. “We park next to each other wherever we go racing at together. It was a lot of fun. The race track was a lot better, even with the weather and the low car count.”

Wednesday’s second night of racing at the Southern Iowa Speedway will be the last with an empty grandstand as restrictions on spectators due to the coronavirus set to expire next week. While the track was scheduled to have next week off, officials are looking at potentially hosting the third night of racing at SIS next Wednesday night, giving the fans an immediate chance to return to the track.

“We’re kind of toying with the idea of racing knowing we can open the grandstands. That would be a big thing for us to race with a big crowd on hand,” SIS race announcer Jerry Mackey said. “We have to make a decision in the next few days. We’ll reach out to the drivers to see how many we can get before we make that decision.

“Whether it’s next week or the following Wednesday (the originally-scheduled June 10 race night), it’s going to be fantastic to have our fans back. We just can’t wait.”