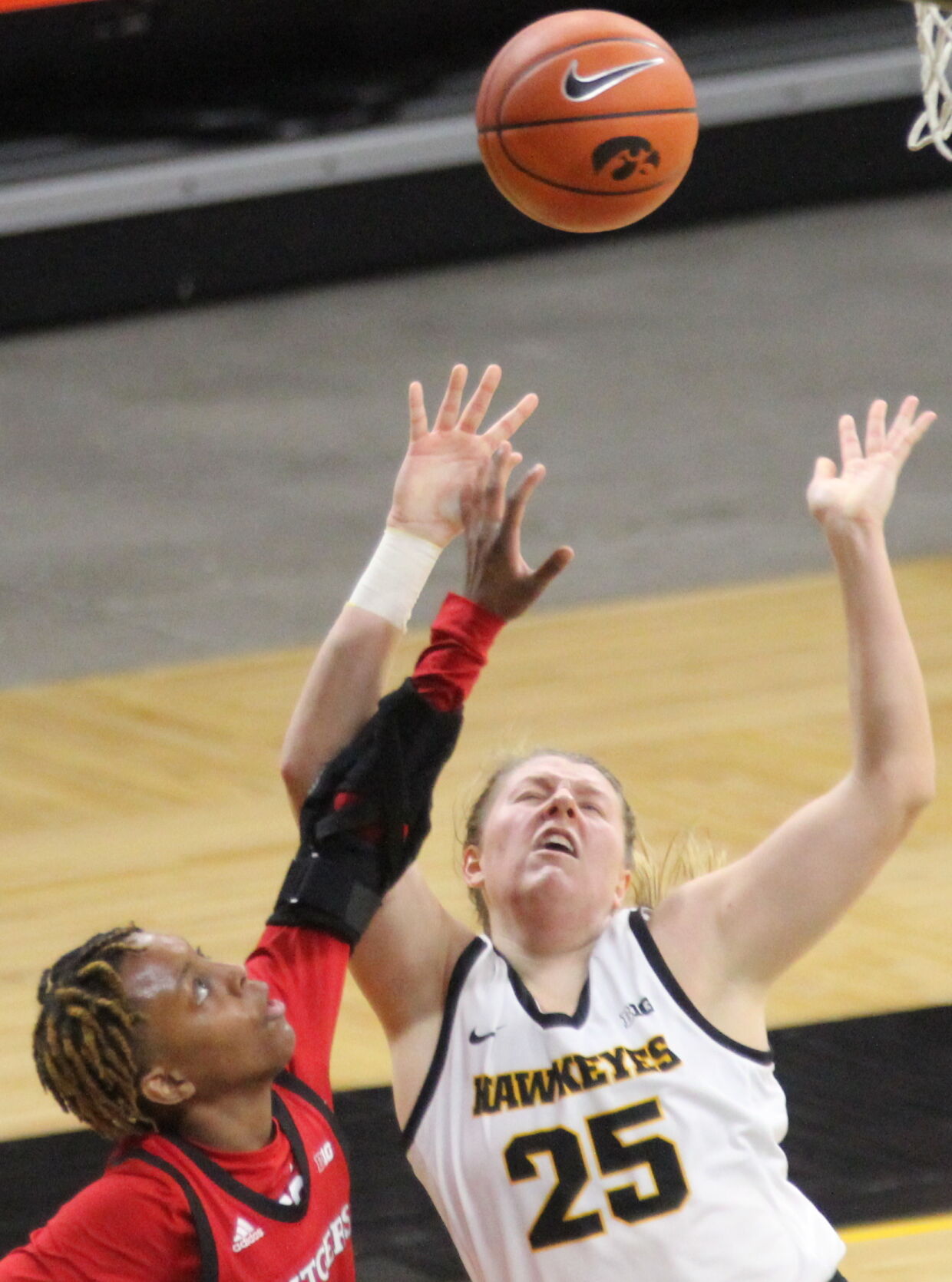 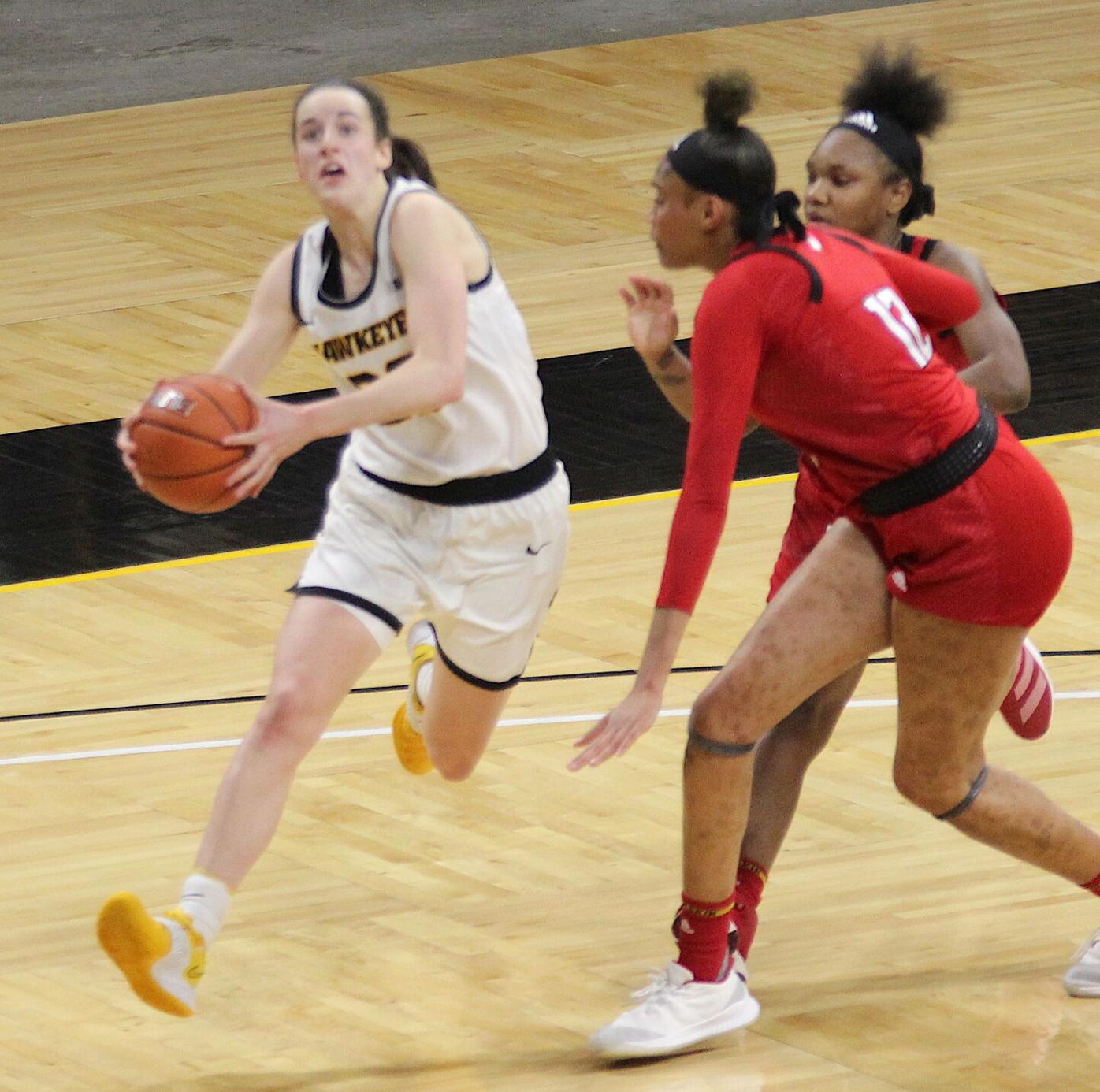 On the final day of 2020, the Iowa Hawkeye women's basketball team needed to show resiliency in order to come out on top.

Caitlin Clark scored 12 of her team-leading 28 points in the fourth quarter, but made the biggest play by passing up a shot in the final minute against Rutgers. The freshman phenom drew a double team with Iowa clinging to a three-point lead and found Kate Martin for a wide-open 3-pointer with 37.4 seconds left, helping clinch a 90-84 Big Ten win on New Year's Eve at Carver-Hawkeye Arena.

"I think I called for a ball screen from Monika (Czinano) and I think they ended up trapping off the double," Clark said. "I heard Kate in the corner, so I just passed it to her. I knew she was going to knock it down. We practice those every single day."

Martin would seal the victory at the foul line with seven seconds left, clinching a hard-fought win that saw the lead change hands five times in the third quarter after Iowa had stormed out to a 20-point lead in the first half.

Three straight field goals by Diamond Johnson keyed a 28-10 finish to the first half for Rutgers (5-2, 1-2 Big Ten), nearly wiping the Hawkeye lead entirely by halftime. Clark fell victim to a pair of steals in the quarter going one-on-one with Johnson with the second steal nearly leading to a tying lay-up in the final seconds of the first half.

"They started a few more shots that they didn't make in the first quarter," Clake said. "We also had a few too many turnovers. We could have done a better job handling their full-court press. We needed to slow it down and make smart decisions."

Johnson's second steal of Clark would not result in a tying basket as the Rutgers freshman missed the lay-up, keeping Iowa in front 42-40 at the half. Sakima Walker would complete the comeback by putting back a 3-point miss for the Scarlet Knights to open the second half, tying the score for the first time since the game was tied at 5-5 just over two minutes into the game.

"Rutgers is obviously a good team. They've played very well this year," Iowa head women's basketball coach Lisa Bluder said. "We haven't played in a long time. You never know coming out of a break if you're going to be rusty or not."

Clark put Iowa back on top, beating the shot clock with a tiebreaking 3-pointer. Rutgers, however, found the answer for Iowa's top scorer with one of the conference's most talented seniors as Arella Guirantes scored 10 points in the third quarter, making four straight field goals including a 3-pointer with 4:02 left that put the Scarlet Knights ahead for the first time since the first quarter at 52-51.

"You're probably looking at a first round WNBA draft pick," Bluder said of Guirantes. "You cannot let her loose at any time."

Iowa (6-1, 2-1 Big Ten) answered back as the team's exchanged go-ahead hoops over the next four possessions. Gabby Marshall keyed a 10-2 close to the third quarter for the Hawkeyes by hitting 3-pointers on consecutive possessions, sending Iowa into the fourth quarter with a 63-56 lead.

"It's good for our team to get a lot of people involved in the offense," Bluder said. "I think that we're getting there. Having five people reach double figures is so good. I'm happy to see a lot more people involved."

McKenna Warnock would be involved early on for the Hawkeyes, returning to the court for the first time since a Dec. 12 loss to Michigan State. After resting an injured ankle in Iowa's last game, a 92-65 win over Western Illinois, Warnock scored 12 of her 18 points in the first quarter making four of her first five shots from 3-point range to help Iowa open a 28-12 lead after one.

"Obviously, an injury is never fun to have," Warnock said. "My team helped me out. They never looked down on me. They just found me. They made good passes. Some of them were difficult passes. They had good open eyes around the floor and found me in some open spaces. Once I started hitting shots, they were right there cheering for me. That definitely helped my confidence.

“McKenna is a warrior,” Bluder added. “I’m happy she is back because, as you can see, she is a big factor for us.”

Warnock would answer a 6-0 start to the final quarter by Rutgers by driving to the basket with a spin move at the free throw line, finishing at the basket while being fouled for the first of Iowa's four possessions in the final 10 minutes that resulted in three points. Czinano would score three points from the inside on Iowa's next possession, pulling in an offensive rebound and scoring while being fouled, giving the Hawkeyes a 69-62 lead.

"We just had to make sure we stayed composed. We knew going that Rutgers is a very physical team," Czinano said. "There's no point in arguing calls. It was a matter of keeping your composure."

Czinano would roll in a jumper from the free throw line with 3:08, capping a 17-point effort for the Iowa junior while giving Iowa a 73-70 lead. Clark would take over from there, scoring the next eight Hawkeye points to answer six straight free throws by Rutgers before finding Martin for the clinching 3-pointer, preventing the Scarlet Knights from getting a late possession with a chance to tie or win the game.

"I think I kind of rushed things in the first half," Clark said. "In the second half, I kind of slowed things down and let the shots come to me. I had a huge 3-point play of my own with 2:09 left. From there, it was just a matter of holding on to the ball. We knew they were going to have to start fouling eventually and we'd just need to hit our free throws."